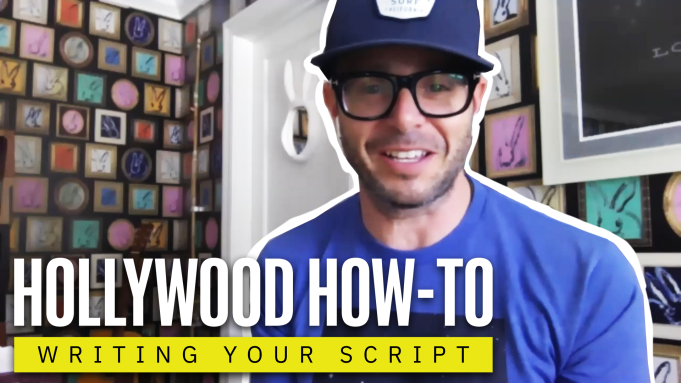 Variety’s new weekly series, “Hollywood How-To,” will tackle all things writing, with conversations about everything from crafting characters to navigating the writer’s room.

There are few writers working in television today who have had a more varied (and venerated) career than Damon Lindelof. After working on the writing staff of CBS’s “Nash Bridges” and NBC’s “Crossing Jordan” in the early 2000s, Lindelof went on to co-create a grand sci-fi adventure series (i.e. ABC’s “Lost”), an unsparing human drama about grief and loss (HBO’s “The Leftovers”), and a wildly ambitious extension of an acclaimed mid-1980s graphic novel about costumed vigilantes (HBO’s “Watchmen”).

Suffice it to say, along with work as a blockbuster screenwriter (2012’s “Prometheus,” 2013’s “Star Trek Into Darkness” and “World War Z”), Lindelof’s career has run the gamut. So to help launch Variety‘s new “Hollywood How-To” video series on writing a script, we asked Lindelof to talk through some of his process as a television writer. Here’s what he had to say.

The most important element to writing an episode of TV, Lindelof says, is to figure out “what are we going for here? What is this episode going to be about?” Answering that question boils down to figuring out who is the focal point of the episode.

“The audience is looking for a surrogate when they’re watching an episode of television,” Lindelof says. So once you decide which character or characters you will be following for that episode, you can then begin to decide what they want, and from there begin to sort out the story.

In television, Lindelof works with a writers room, a group of fellow writers who meet and talk out every element of each script, especially story beats — i.e., “the things that we want to see in the episode.” By the end of that process, he says, he will have a 30 to 40 page document “of every single scene that is going to be in the episode.”

It’s all designed to make the work of actually writing the script for the episode much less daunting.

“It doesn’t feel like a blank page anymore,” Lindelof says. “It feels like I’m just cooking prepackaged ingredients with a very detailed recipe.”

“The story has to always be in service to the characters and the themes,” Lindelof says. “Otherwise you’re just sort of doling out plot.”

Figuring out what the themes are takes a great deal of discussion. Lindelof talks at length about how he and his writing team sorted out the central themes of “Watchmen” — namely, race and justice in America. Then, he says, the job was to find instances where their story can lock into their themes.

4. Defying “Write What You Know”

Every new writer is told “write what you know.” On its face, of course, this makes sense.

“Our job as storytellers is to make the pretend feel real,” Lindelof explains. “That’s the spirit of what ‘write what you know’ is supposed to protect.”

But with “Watchmen,” Lindelof was drawn to tackle issues of being black in America — built around the real life massacre of black citizens in Tulsa, Oklahoma in 1921 — that have nothing to do with his own lived experience. Which caused Lindelof to flip the “write what you know” maxim on its head.

“It’s a call to action to do research on what you don’t know,” he says. “The challenge should be write what you know, but we should be able to answer the question, Why do you care? Why this? Why now? And if you can find that thing and articulate it to others, then you are writing what you know.”

5. Shut Up and Listen

Lindelof’s initial inspiration for “Watchmen” came after he read about the Tulsa ’21 massacre in Ta-Nehisi Coates’ “The Case for Reparations” piece for “The Atlantic,” and realizing that he had never heard about it before. And the only way he could learn was to ask questions and listen.

“As I began to express my emotional experience with learning about Tulsa to people of color who were sort of like, ‘Yeah, I’ve known about this my entire life,'” Lindelof says, “that was my way of saying, ‘I don’t know what I’m talking about, but I want to talk about this. Can we talk about this?'”