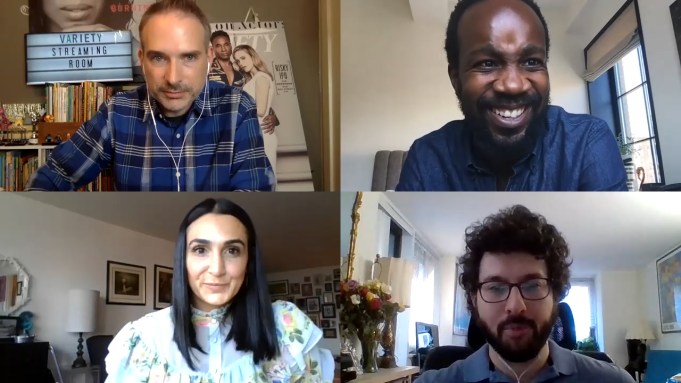 Even the coronavirus pandemic couldn’t stop Comedy Central’s long-running “The Daily Show.” Trevor Noah’s late-night showcase, now produced remotely and dubbed “The Daily Social Distancing Show,” has expanded to 45 minutes per night during production, for the first time since the franchise launched in 1996.

Flanz reflected on the final live show, in which the team produced a goodbye tribute to their live audience. When the showrunners made a joint decision to close production in March, her team had thought work-from-home would only last two to three weeks.

“We were pretty equipped to just quickly shift into — we’ll just do some quick videos here and there the first few days, because we really didn’t know how severe the pandemic was going to get,” she recalled. “By the middle of the [first week off set,] we were doing like longer YouTube shows, and then we were like why don’t we figure out how to get this on the air?”

On the bright side, Amira believes “The Daily Social Distancing Show” has allowed his writing team to pursue jokes they haven’t written before. Writers no longer have to gage with the live audience’s reaction, while the production team has explored creative ways to display humor on screen. Flanz adds the remote aspect allows the editors to enjoy the show in their homes, without worrying about every line hitting the mark.

“This week, we had Trevor talking to an alien in the corner of the screen. We turned Trevor into a newsman with glasses,” said Amira. “You can just do this stuff instantly, go on to the next joke, and it’s gone. That stuff would have been much harder to do, if not impossible in the studio.”

With events leading up to the Black Lives Matter protests and the upcoming presidential election, “The Daily Show” has been covering a range of topics, some that weren’t unpacked with jokes and banters. Rather, Noah and the writers have found ways to discuss these news stories in a more serious yet digestible manner.

Flanz adds the different experiences and backgrounds of the writing team allows the show to tap into a wide array of subjects. A member of her team, for instance, has been pitching stories from Australia, where he has been based since the early days of the pandemic.

“The great thing about having such a diverse cast is that there’s so many different pieces to do from so many different points of views, and you don’t have to just adhere to the host. It’s nice for Trevor to have somebody to play off of,” said Flanz.

On returning to studio production, the team agrees on taking it slow, until every team member can safely work in the same space. “Our greatest content comes from our morning meetings, where there’s about 40 of us, producers, writers, talents, correspondents,” said Flanz. “We sit around and we just debate things, and that’s awesome. And that’s how our show gets made.”