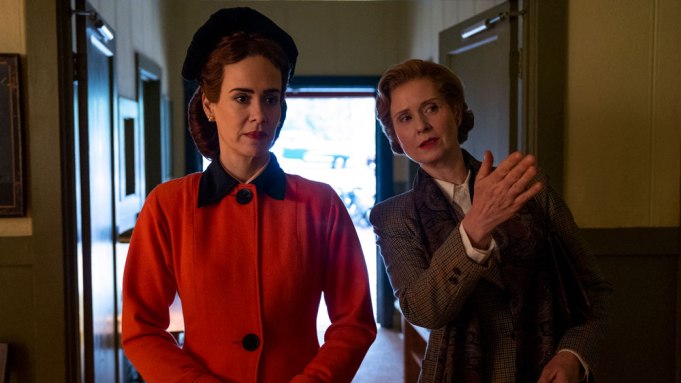 For Cynthia Nixon, the power of playing another woman’s love interest on a high-profile show like Ryan Murphy’s “Ratched” — the Netflix series based on the infamous nurse from “One Flew Over the Cuckoo’s Nest” — is not lost.

“If you think back on the movies in the middle part of the 20th century, there are so few gay characters of any kind. And when we exist, we exist as terrifying perverts and pedophiles and cold villainous malevolent women,” Nixon, 54, says on Thursday’s episode of the Variety and iHeart podcast “The Big Ticket.” “To actually get to see a couple played by two women who are themselves gay, it’s a big deal.”

Paulson stars as the title character, Mildred Ratched, a mysterious woman who becomes the head nurse at Lucia State Hospital in 1947 for reasons other than to actually help and heal the patients. Nixon plays Gwendolyn Briggs, the California governor’s (Vincent D’Onofrio) press secretary who tries to improve her boss’s image by staging a series of photo ops at the hospital. “Ratched” premieres on Netflix on Sept. 18.

“At our first visit to the mental hospital, [Gwendolyn] sets eyes on Mildred Ratched who she kind of falls for almost immediately,” she said. “There is a kind of confluence of her professional agenda and her personal agenda.”

Variety caught up with Nixon over Zoom from Montauk, where she was spending a few days with her wife Christine Marinoni before heading back to New York City to resume production on HBO’s “The Gilded Age.”

How did it come “Ratched” come about for you? Did you think Mildred “Ratched” had a backstory?

I was told about the show because Sarah Paulson and I are good friends, and I was told that there are a number of really juicy female parts other than her part that I might be right for. Then I got a call from Ryan Murphy a little before Christmas 2018 describing it to me. I read the script and I said, “Absolutely.” Even though, in my 40-plus year long career, I have never considered doing a television series that shoots in Los Angeles before because I am a New Yorker, this seemed too good to miss and also to enter the Ryan Murphy universe. It’s very exciting to play a queer character who falls in love with another queer character, also played by another queer actress. I mean, this does not happen every day. And to get to act with people like Judy Davis and Sophie Okonedo and Amanda Plummer and Sharon Stone? This is an embarrassment of riches.

It’s amazing, but also we’re very blessed that we’re not just stick figures. Yes, these women are queer, but they also have a lot else going on. They’re deeply complicated, both of them each in their own way and they’re trying to find each other is the course of true love never did run smooth is beset by obstacle after obstacle, some external, many internal.

I did want to talk to you also about J.K. Rowling. You’ve said that your son, who is transgender, is quite upset by her comments about trans people.

If you could sit down with J.K., what would you say to her?

I’ve tried to understand the point of view that she’s coming from. I don’t understand it. I think everybody in my world was so delighted at when she let slip that she always thought that Dumbledore was gay. We were like, “Oh, how terrific.” So to have her kind of exclude and deny this segment of our population, some of whom are her most ardent fans was really upsetting. I was quoted about this recently, but they didn’t quote the thing that I wanted to say equally as much, which was that I was so impressed and touched by Daniel Radcliffe’s response and how he just said everything you would want someone to say, about how working as he does closely with the Trevor project that we should be listening to those people about who trans people are and what they need and what is destructive to them.

Are you able to separate the artist and the art?

I wouldn’t be doing my job without asking you: Will we ever see another “Sex and the City” movie?

I do not think so.

Would you want to do another movie?

I love “Sex and the City,” and if the powers that be all got together, and if it was a go, of course, I’d be like, “Oh, how terrific, old home week.” But I just don’t see it happening. People tried very hard, but it was a not a go.

This interview has been edited and condensed. You can listen to the full interview above and find out what Nixon says about running for office again and how she thinks Gov. Andrew Cuomo has handled the pandemic. You can also find “The Big Ticket” at iHeartRadio or wherever you listen to your favorite podcasts.