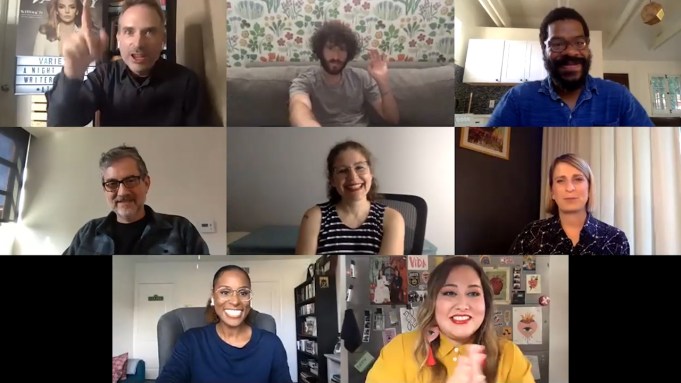 So much of creating a comedy series happens in the writers’ room, where jokes fly back and forth and writers riff off one another.

With the coronavirus pandemic putting a hold on in-person rooms, a group of comedy showrunners shared their experiences running virtual rooms, among other topics, at Variety‘s virtual “A Night in the Writers’ Room” event.

“Black-ish” showrunner Courtney Lilly and his room are currently prepping for the ABC show’s seventh season, but he said it feels odd to be out of the established rhythms he and the writers have become used to.

“We’re all making adjustments,” Lilly said. “We’ve been very scheduled, we start at a certain time, we take breaks at certain times. It’s not generally how we worked for six seasons, that’s the adjustment we’re going through. But we’re also at an advantage because we’re in season seven, so there’s a lot of shorthand. I couldn’t imagine how difficult it would be to start up with a whole new group of people and be like, ‘Okay now let’s all be able to share our most intimate details with each other, while we’re in this place so disconnected from one another.'”

Dave Burd is a newer kid on the block in comparison to the others (Burd stepped into a writing role for the first time on Hulu’s “Dave,” in which he also stars), and the rapper-comedian pointed out that the tricky situation of virtual rooms is exacerbated for fresh hires.

“Dave” has three new writers in the room for season 2, Burd revealed, none of whom he has met in person.

“Even the interviews to hire them were done via Zoom,” Burd said. “It’s hard enough to be a new writer in the writers’ room in-person and chime in, but I can’t imagine how hard it is to then have to do that via Zoom and having to get your points off that way. I feel like it’s the trickiest for the newcomers.”

The pandemic struck right as “Dickinson” showrunner Alena Smith was putting the finishing touches to season 2.

Every single episode of the Apple show’s second season was “as close to being finished as possible without completely being finished,” Smith said, meaning that some “bizarre” remote workarounds had to come into place.

“A very expensive sound-bar was shipped to my house. I had to figure out how to do a sound mix from home, it was really weird,” Smith said. “We finished, it’s done, the episodes got delivered. I just can’t imagine what it would have been like if this had happened in the middle of season 1. You’re so small compared to these macro forces, and I guess in this business in which no one knows anything and there’s total uncertainty, now it’s like that times a million.”

Several of the showrunners are currently grappling with whether or not to weave COVID-19 or quarantine in the narrative for their forthcoming seasons.

For “Upload” creator and showrunner Greg Daniels, the decision is made easier by the fact the Amazon series takes place in the future.

“Luckily for me, ‘Upload’ is set in the year 2033, so whatever COVID problems the world had, they had it 15 years ago, so I don’t think I have to deal with it right away,” Daniels said. “But it is an interesting debate about whether you incorporate these events into the storyline. Are people going to just look at a normal scene that’s set in a bar and be worrying about nobody wearing masks?”

In answering Daniels’ question, “Dead to Me” showrunner Liz Feldman was pretty categorical that a potential third season of the Netflix series (Feldman is still waiting to hear an official decision from the streamer) will not broach the pandemic in any way.

“I will definitely write from the collective feeling that we’re all in right now, I think you can’t ignore that,” Feldman began. “But personally, I’m not interested in hearing Jen (Christina Applegate) or Judy (Linda Cardellini) talking about their fears around COVID. I certainly don’t want to put masks on my actors…That’s where I stand right now, that could change, but I think a year, a year and a half from now, whenever we’ll be on the air, I’m hoping that our audiences will be hungry for a different story.”

While “Insecure” showrunner and star Issa Rae managed to get season 4 of the HBO series in the can before the pandemic bowled over everyone else’s production plans, the rising racial tensions in the United States brought about by the deaths of George Floyd, Breonna Taylor and other Black citizens at the hands of police officers created a difficult environment for a comedy to air in.

“The angst and anxiety and the general worry of promoting a show during that time and feeling weird about it was a lot,” Rae said. “We aired the weekend when everything hit the fan. I just remember having conversations about, ‘What do we do?’ It just feels like none of this matters right now and it just feels insensitive and distasteful to even talk about the series. The episode that aired happened to be the perfect episode to air because it was just about two people engaging in conversation and it was about self-reflection and ended up being beautiful.”

The wave of protests taking place across the country has also sparked an even more vital conversation about inclusion in Hollywood and specifically in writers’ rooms.

One show that has been “unapologetically Brown and queer” both on-screen and off is Starz’s “Vida,” which recently ended its run after three seasons.

“I’m a big believer in ‘no stories about us without us’ right now in this moment in time,” Saracho said. “Our narratives have been helmed by other people, and that it is so artificial and so poisonous to consume an image of yourself told by the dominant culture…It really harms a community.”

Although Saracho revealed that she deliberately left the door open for “Vida” to perhaps be picked up for more seasons elsewhere, a revival is not currently in the cards, at least for the time being.

“I’m told there’s no hope because the studio and the network are the same. They would have to want to continue it, I don’t have a lot of power in that,” Saracho said. “But I did leave those threads hanging there, just in case somebody takes pity.”