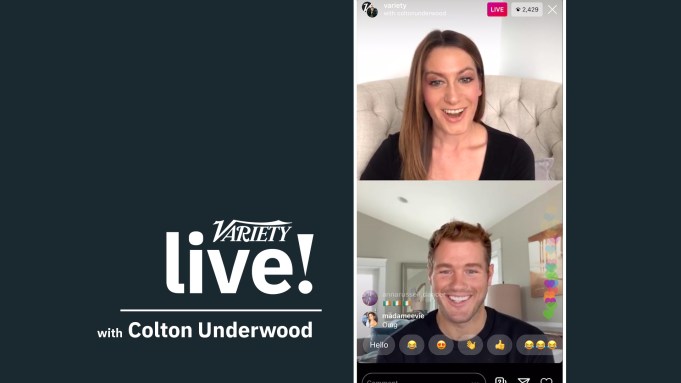 Nearly two weeks after revealing he tested positive for Covid-19, “The Bachelor” star Colton Underwood is well on the road to recovery.

“I feel so much better,” Underwood said Tuesday on “Variety Live” on Instagram. “I was very lucky and fortunate that the medicine worked for me and all of my symptoms were manageable from home. It got scary for a few days, but overall, I’m very lucky and very fortunate that I’ve recovered.”

Underwood revealed that his primary symptoms were headaches, body aches and night sweats. “The moment where it sort of turned for the worst was shortness of breath mixed with a cough that made it impossible for me to breathe, in a way, so that was the scariest moment,” he said.

Underwood says he took a Z-Pack and the anti-malarial drugs that were recently authorized by the FDA, although their effects have not yet been proven. “The ones that, very early on, the president said had very good results for everybody that had the coronavirus,” Underwood shared, noting that he is not a medical professional, and was only sharing his specific experience, which, luckily, was successful.

The reality star has now been cleared to go outside for walks, as long as he practices safe social distancing, but he’s remaining quarantined at the family home of his girlfriend, Cassie Randolph, whom he met on his season of the ABC dating show. While quarantined, Underwood has been watching Netflix (yes, he’s seen a few episodes of “Tiger King”), watching stand-up comedies and documentaries, playing video games, reading and binging The CW’s “The 100,” which he says is a favorite new show for him and Randolph.

With 2 million followers on Instagram, Underwood is urging his young fans to take coronavirus seriously and practice social distancing and self-isolation.

“At the same time that I was testing positive, there were spring breakers on the beach in Florida and people were still trying to say, ‘It doesn’t matter if I get it, I won’t have symptoms,’ and that wasn’t the case,” he said. “My message would be listen to your health care providers, listen to the government and our president right now who’s talking, and all the governors who are doing their best to try to keep this not as impactful as it has already become.”

The TV personality and former pro football player can now add author to his resume, as his first book, “The First Time: Finding Myself and Looking for Love on Reality TV,” was released Tuesday. No stranger to opening up to millions of viewers, Underwood now takes the narrative into his own hands and writes about his time in “The Bachelor” spotlight, his parents’ divorce, his sexuality, his relationships and high-profile break-up with gymnast Aly Raisman.

“The book was just for me to take ownership and get control of my life back, or feel like I was having some control back in my life,” Underwood says, “and also share stories that I felt were personal for me to share from my perspective and my views, instead of allowing someone else to have that control on a TV screen or behind a camera.”

Underwood’s 2019 season of “The Bachelor” used his virginity as a marketing hook, and the storyline throughout the season revolved around him being a virgin. He became known as “The Virgin Bachelor,” and he’s since said he feels the network overplayed his sexuality. In his book, Underwood reveals that growing up, because he was a virgin, people questioned whether he was gay.

“It was challenging for me to be standing up for my values and my beliefs, and looking back now, growing up in sort of a hyper-masculine culture as football or a conservative family — which I love them and I share some of the same values and beliefs as them — but it was still a struggle for me to articulate to people or to explain to people, and I always felt like I was on the defense,” Underwood tells Variety. “It was one of those things when you hear it so often and so much, you start believing it or you start questioning things. It really did affect me and it really was a weird time in my life, and I internalized a lot of it because I had nobody to talk to and nobody to vent to about it.”

The most recent season of “The Bachelor” featured a contestant, Madison Prewett, who was saving herself for marriage, but did not reveal her virginity to the season’s lead, Peter Weber, until the end of the season, which caused much drama that fueled an impossibly dramatic finale. In the end, Weber got engaged to contestant Hannah Ann Sluss and then changed his mind and broke off the engagement, only to reunite with Prewett in front of a live studio audience during the finale. Days after the live finale aired, Weber and Prewett announced their break-up.

“Part of me is just frustrated for him — frustrated that maybe production didn’t guide him as well as they should’ve, frustrated that he didn’t stand up for himself or take ownership in certain situations,” Underwood said, giving his take on the finale, which has generated criticism from audiences. “This world is crazy, and I know what goes on behind the scenes and what takes place, so I feel for him a little bit. But, I also sympathize with the two ladies that were at the end as well. It’s unfortunate, and everyone has their own ending, and hopefully he’s grown as a person and a human being, and everybody involved knows how they could do better next time.”

“I think that the show just needs to get back to finding love, more than relying on the drama for the viewers and the ratings,” Underwood said about Weber’s controversial finale. “I think the ratings are going to be there just as much, if not more, if it’s trying to set people up for success at the end of this, instead of just getting the drama and the clickbait and the catching news.”

As for his own love story, Underwood made headlines back in 2019 when his season ended without an engagement, but with Randolph giving him a second chance. More than a year later, the TV couple has proven that you can find a partner on reality TV. Even though the format of the series typically ends with a ring and a proposal, Underwood and Randolph are not in a rush.

However, if they do decide to get married, they would consider televising their wedding.

“That’s obviously way in the future. We still have the engagement to get to before the wedding,” Underwood said. “But we both love and enjoy being on camera, and we also love sharing our story with people and love feeling connected to all the people who’ve supported and loved us from the beginning, so we would never speak definitively and say yes or no, but it is an option.”

As for reality TV, Underwood is open to the possibility, but he’s ruled out appearing on “The Bachelor” franchise again.

“That’s actually something Cass and I have discussed and talked about, and if a project comes up that makes sense for us, that would be amazing,” he said about another reality show.

“For me, I feel like as therapeutic and as good as this book was, it was also a way for me to sort of close the chapter on ‘The Bachelor’ franchise,” he says. “I have nothing but love and support for those people and I feel like I’m walking away at a good point right now, and I’ll always support the Bachelors and Bachelorettes, but as far as being on screen with the franchise, I feel like my time is done.”