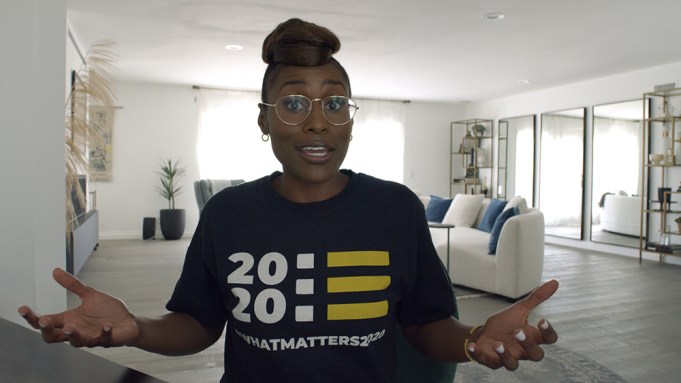 HBO is bringing quarantined celebrities to the small screen with their new original special presentation “Coastal Elites,” and the just-released trailer shows the lighter side of isolation.

The comic satire, the latest in a slew of pandemic programming, stars Issa Rae, Bette Midler, Kaitlyn Dever, Dan Levy and Sarah Paulson as several people telling their socially-distanced stories from across the United States. The satire, written by playwright Paul Rudnick and helmed by “Bombshell” director Jay Roach, will premiere on September 12.

The trailer, stuffed with political humor, sees Rae’s character recount an interaction with Ivanka Trump, Midler’s left-leaning persona talk about seeing a MAGA hat-wearing man in New York City and Dever’s frontline nurse remember meeting someone who may have had COVID-19 symptoms.

Rudnick recently spoke to Variety about the challenge about writing for such a timely project.

“I didn’t want the material to feel instantly dated, so I tried to be very careful about references,” Rudnick said. “Things are so crazy that when you think about three months ago it feels like a lifetime and people are almost nostalgic for February. I wanted to reflect that sense of being overwhelmed by every possible event so it would feel emotionally valid at any point. I think it could be working as a time capsule of Americans’ lives.”

“Coastal Elites” is the latest in a series of socially-distanced specials, joining a special from-home finale of the CBS drama “All Rise,” a quarantine episode of Apple’s “Mythic Quest,” and a reunion special for the NBC sitcom “Parks and Recreation.”