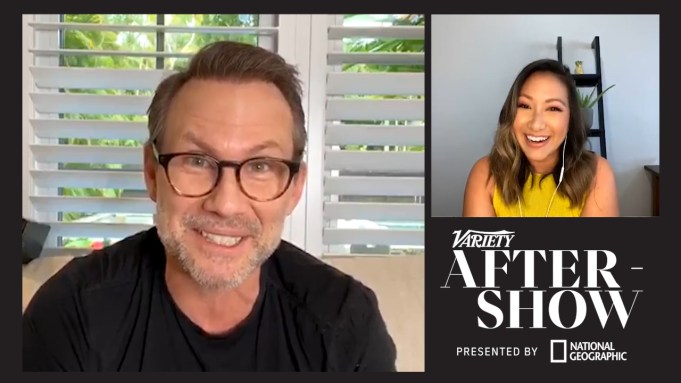 If there is one film Christian Slater wants to revisit from his early career, it’s 1990’s “Pump Up the Volume.” The drama — which celebrates its 30th anniversary in August — centered on teenager Mark Hunter (Slater), a high school student by day and a pirate radio DJ who goes by “Hard Harry” by night.

“That is my favorite movie, I think, that I’ve ever done [and], to a large degree, favorite job,” Slater reveals on the Variety After-Show. “I felt like it was ahead of its time. It wasn’t a typical high school movie, and it really did get into some of the darker, more gruesome details of what it’s actually like to be a teenager in high school.”

The film, which dove into issues of teenage angst and suicide, has gained a cult following since it first debuted and was adapted into a musical. Slater says he’s had meetings about bringing an updated version of the film to life and wonders what a modern adaptation could look like in the age of podcasting and independent content creators.

“I think it’d be fun to re-examine, like, what the heck happened to Mark Hunter? Where is the kid that had the pirate radio station?,” he says. “But now it might be, ‘Who cares, because everybody’s got a podcast,’ and that was like the original underground podcast before any of this stuff was going on.”

The prolific film and TV actor had a chance to revisit the past with USA Network’s “Dirty John: The Betty Broderick Story,” the 1980s-set second season of the “Dirty John” series. The show is based on the tumultuous real-life divorce between Dan Broderick (Slater) and his wife Betty Broderick (Amanda Peet), and the subsequent tragedy in which Betty killed Dan and his new wife, Linda.

Incidentally, before he signed onto the project, Slater says he had rewatched the seminal 1944 psychological thriller “Gaslight,” starring Ingrid Bergman and Charles Boyer, which helped him tackle the role of a manipulative husband.

“[‘Betty Broderick’] really is a gaslighting story. It’s one of those stories where there’s just so much psychological insanity going on and so many lies being told. Really putting a woman in that kind of position where she needs to question every possible thing is — it’s just torturous,” he observes. “Charles Boyer was in my brain a lot while we were making this.”

Ultimately, the show did not depict the bloody crime, and the season finale, which aired Tuesday, focused mostly on Betty’s courtroom cases. Slater commends creator Alexandra Cunningham’s decision to focus on the psycho-drama elements between the acrimonious couple versus the murders.

“Not showing that, I felt that to be a very classy choice. I was surprised by it, as well, because usually that’s not the direction things like this go in. We are in a visual entertainment medium,” says Slater, “but I think this was more about a mental journey and a moment like that gives the opportunity for the audience to create whatever that might have looked like in their own mind.”

For four seasons, Slater starred as Edward Alderson in series “Mr. Robot,” a role that nabbed him a Golden Globe in 2016. The show ended last year and while Slater says he felt they wrapped it up “beautifully,” there might be more to be mined from Sam Esmail’s techno-thriller world.

“I thought an interesting possibility would have been to really go back in time and explore a little bit more of the Washington township and how my character Edward got fired,” Slater says.

If the opportunity were to ever arise to do so, he’s ready: Slater kept Alderson’s signature workman’s jacket and hat as souvenirs from the show.

“I have all that stuff in my closet, ready to go,” he says. “Just take it right out of the closet, and ‘zip’ — right there.”

Watch the full interview with Christian Slater on the Variety After-Show above.