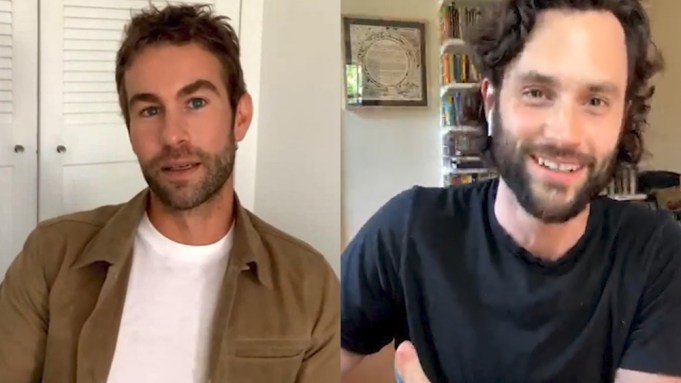 In Variety’s Actors on Actors issue, Chace Crawford and Penn Badgley vowed to live tweet “Gossip Girl” after discovering they both haven’t watched the series since it ended.

Badgley upped the ante, adding, “Dude, if we live tweeted a viewing of any episode of “Gossip Girl,” people would love that. Are you kidding?”

Badgley and Crawford reunited for Variety’s annual Actors on Actors issue, which celebrates the best TV performances of the year. Badgley stars as the serial killer Joe in Netflix’s “You,” now in its second season, while Crawford joined the streaming TV world as a superhero on Amazon’s “The Boys.”

Despite becoming famous in 2007 for “Gossip Girl,” a show that seemed to acknowledge social media before the age of social media, Crawford and Badgley were both late to crafting online personas. It was only in 2015 that they joined Twitter, and as of the time of filming Actors on Actors, the pair didn’t even follow each other.

“Forgive me, I don’t follow you,” Badgley asked. “You must have social media accounts now, right?”

Crawford admitted he resisted social media for a long time. “I was trying to be too cool for school. I think I got it in 2015, way late… I’m going to follow you right now,” he said before whipping out his phone.

Badgley, who was filming the conversation on his phone, said he would follow Crawford back after.

After a brief investigation, it appears that neither actor has yet to follow each other. But to be fair, as of press time, Crawford only follows nine people.