‘Mrs. America’ Cast and Creators on Portraying Historical Figures With Accuracy and Empathy 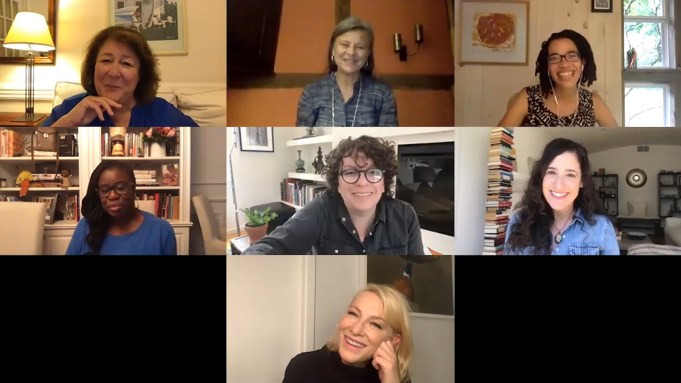 The cast and creators of the FX on Hulu limited series “Mrs. America” sought to bring the ’70s feminist movement and the fight surrounding the Equal Rights Amendment to the screen through exploring the personal motivations of its key players.

Now with 10 Emmy nominations, the show has struck a chord by revealing little-known truths about the women on both sides of the argument, including Phyllis Schlafly, Gloria Steinem, Shirley Chisholm, Jill Ruckelshaus, Brenda Feigen, Bella Abzug and Betty Friedan.

After a screening of the series’ third episode, “Shirley,” Variety‘s Kate Aurthur discussed the importance of portraying these figures with accuracy and empathy with executive producer Cate Blanchett, who played Schlafly; creator, showrunner and executive producer Dahvi Waller; producer Tanya Barfield, who wrote the episode; Margo Martindale, who played Abzug; Uzo Aduba, who played Chisholm and Tracey Ullman, who played Friedan. (All of whom have been nominated for Emmys.)

Blanchett said that although Schlafly’s beliefs were the opposite of her own, she felt drawn to the character out of a need to understand where she was coming from.

“I think, like a lot of people, I was reeling from the process and the results of the 2016 election in America, and wanted to understand how we’d got to a point where women seemed to be voting against their own self-interest,” Blanchett said. “I wanted to know what made her tick, and I found that there was a terrifying need to be right, a profound need to make the world in her own image and a fear of change.”

“I had this profound sense of living in Groundhog Day,” Blanchett said. “Every day we were on set, the words, the phrases, the situations that we found ourselves in as characters, seemed to be just literally mirroring the things that were happening in politics and society in America generally.”

For series creator Waller, it was a priority to humanize the women on both sides of the ERA argument, even when they got into heated debates – like the one in 1973 where Schlafly calls Friedan a witch.

“We really took the mantra of the women’s movement, that the personal is political, and that was really the mantra in our writer’s room,” Waller said. “We didn’t want this to be polemic. We really wanted to dramatize this political drama through the personal. So we know we had this debate, that was quite famous, between Betty and Phyllis, and so the question in the room was, what are the personal stories of each of them as they drive towards this first intersection of our characters that we’ve been waiting for, for four episodes?”

This environment bred a few difficult conversations among cast members and creators on set about their own ideas about feminism. However, Waller and producer Barfield believe that it added to the authenticity with which the characters were portrayed.

“I remember that there were days when we were like, ‘Wow. It’s hard to have these conversations. It’s actually hard,'” Barfield said. “I will give testament to Dahvi who said, ‘But we have to make that part of the show, no matter how hard it is.’ It would have been easier if we just said we’re not going to put that in the show because we can’t figure out how to do it.”

To prepare for her role as Chisholm – the first Black woman and person to run for president in 1972 – Aduba watched documentaries and speeches, but what she really looked out for was Chisholm’s vulnerabilities and imperfections.

“It was important to show those blindsides, and important to show the imperfections of these women,” Aduba said. “It would have been really easy, I think, to portray one side as perfect and one side as the imperfect, and instead you got to see how I viewed it. I thought everybody was just so phenomenal in this cast in bringing this idea of everybody’s just trying to do their best as they know how.”

Paying attention to the intricacies of each woman helped to show the varied sides of the feminist movement, and also pointed out the flaws in it that still live on today — such as the struggle for intersectional feminism.

“There were so many feminist leaders who were really marginalized, and continue to be. That intersectionality — the primacy of that within the women’s movement — I really I learned a lot about, and how important it is for us to have these difficult conversations,” Waller said. “How do we make sure that all aspects of womanhood are being represented in this movement, and how do we fight for all women and have our leaders be a truly diverse representation of women? That really hit home for me.”