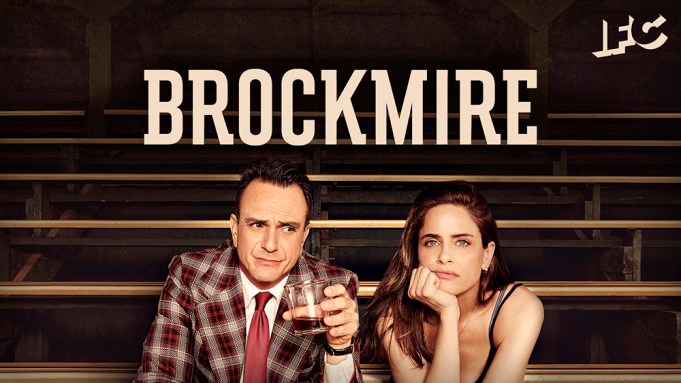 When it comes to TV series chemistry, the old jazzman might say, “You either got it or you ain’t.”

The stars of IFC’s “Brockmire,” Hank Azaria and Amanda Peet, most definitely got it. Their sizzling, sexy comic chemistry was a key factor in transforming an initial cult hit into a hilarious, time-jumping must-watch in its just-aired fourth and final season.

Their bond is very much in evidence in a warm “Series Rewind” video get-together hosted by award-winning entertainment expert Dave Karger. Throughout the reunion, their genuine affection and shared wry humor are plain to see.

Karger inquires into the source of their appeal, and after cracking wise (“We’ve been asked this so much that I’ve now thought about it a lot”), Azaria attempts an earnest reply: “I think we basically approach comedy the same way. I really do. We don’t try to be funny per se,” he asserts, while in her own window Peet mischievously points to herself and mouths, “I do.”

Azaria continues, “We try to come at it really emot …” when he sees her miming, and sighs. “OK. Amanda does. Never mind. There goes my theory.”

Then he gets back on track. “We try to be as real as possible and, you know, connect as much as possible. And I guess when two people are doing that at once, that means — it’s really good chemistry?”

“There’s some actors for whom that isn’t the goal of a scene,” Peet adds. “It feels like they don’t even need the other person. Their thing is all mapped out and it’s a whole thing in and of itself. I think neither of us works that way.”

Character truthfulness has been a hallmark of the series from its first moments. In that stage-setting scene, set in 2007, baseball play-by-play legend Jim Brockmire (Azaria) interrupts his call of a game to rip out a drunken, obscene, spine-chilling yet hilarious rant at his cheating wife. (That scene, originally a five-minute Funny Or Die short, inspired the IFC series.)

Thereafter, “Brutal Brockmire” (as the Internet dubs him) is tossed from the sport and descends into every imaginable addiction before being reduced to broadcasting TV cockfights in the Philippines — a detail that hints at the kind of wild, wacko imagineers creator/showrunner, executive producer and writer Joel Church-Cooper managed on his team.

Jules James (Peet), a minor-league owner who lures Jim back, becomes an off-and-on romantic interest until season four, which jumps ahead to 2033 and Brockmire’s installation as baseball commissioner in a post-apocalyptic U.S.

As she works out her own substance abuse problems, the dramatic question of whether Jules and Jim are meant for each other is gracefully and poignantly answered.

“We sort of started with absurd,” Azaria muses. “What was surprising to me was the depth, humanity and emotion that Joel wrote into it.”

Thereafter, Peet says, their job in comic scenes was “to try to get back to that innocence of not knowing that it’s funny.” Maurice Marable, executive producer and director of seasons two through four, saw to it that the delicate balance was maintained even as the plots became more surreal.

Azaria refers admiringly to Peet’s “bringing real pain and darkness to it,” and the actress defines the critical question as: “How dead serious can you be? How much can you ground this person’s desires or whatever? I find that really, really fun — and harder than drama.”

Another factor grounding the series in reality are the appearances of real-life sports figures, notably broadcaster Joe Buck, whose acting chops Azaria says he doubted until “take one on day one of season one,” when the guest proved “flawless on the jokes and totally connected.” (Azaria jokes that he had to warn Buck, “You can’t be better than me, man! Bring it down a little!”)

Even “Limone,” the show’s craziest imaginative leap — the at-home intelligent assistant of the future who can make breakfast and scold someone on their drug use, and who becomes … oh, why spoil it? — is treated with the utmost seriousness as a character, so “she” can become pivotal in the finale. Admires Azaria, “It’s just great Joel Church-Cooper writing.”

As Karger points out, the secret of the “Brockmire” chemistry is merely the professionalism of all concerned. That extraordinary writing, and the mutual admiration of the two stars, make for a unique 32-episode total viewing experience.