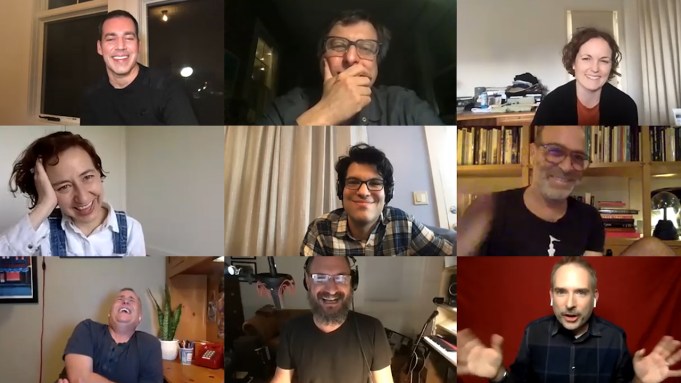 After a decade-long run, the “Bob’s Burgers” creators and cast are more in tune with the beloved show, and each other, than ever before. Although they miss recording as an ensemble amid the pandemic, they pride themselves on their natural and learned chemistry to continue improvising the show and digging deep into the roots of their characters.

“We don’t get to improvise together anymore, and I really do miss that, but I’ve been Louise for so long now that it’s always a delight to play her, and she’s in there, and she didn’t go away,” said Kristen Schaal, who voices Louise Belcher. “She might be a little more feistier than usual because of all the pent-up angst, but the quality is still dynamite, still really good.”

Loren Bouchard, Nora Smith, H. Jon Benjamin, John Roberts, Schaal, Eugene Mirman, Dan Mintz and Larry Murphy discussed show highlights and collaborations between the stars and creators of the Emmy Award-winning Fox animated series, as well as offered an exclusive look at the show’s upcoming 200th episode. The Q&A, part of the “Variety Streaming Room” and moderated by Variety senior editor Michael Schneider, was made in partnership with 20th Television and Fox Entertainment.

The panelists said navigating creative work from home presents its own set of challenges. Mirman, who voices the character of Gene Belcher, said, “I think the answer of how we’re doing under COVID … is it’s a totally manageable hellscape.”

At the same time, the cast has learned to anticipate each other’s thoughts as a result of spending so much time recording as an ensemble, the experience of which has helped them navigate the transition to remote recording.

“We are like a family outside and then when we’re on the mic together, too,” Roberts, who voices Linda Belcher, said. “We’re our characters and we know how to play off each other with, obviously, the writers are giving us so much to work with.”

The actors said they appreciated getting to work more closely with the writers and improvise “by proxy” with them through the script. Smith, who serves as executive producer, said the writers in turn adapt to the improvisation.

“I think the writers and the actors have gotten to know each other and, very much, we’ve met in the middle where the writers now write to our personalities and we, also, act to the writing,” Mirman said. “It merged over the years in a way that’s really fun. Ten years ago, you could watch something and we’d know if we improvised it or if someone wrote it. Now, I would have no idea if it was improvised or written because it’s so seamless.”

According to creator and executive producer Bouchard, the series’ 100th episode allowed the show to get back to its roots. As a result, the 200th episode will be quintessentially Bob’s (voiced by Benjamin) and can stand alone as a pilot episode. Aptly titled “Bob Belcher and the Terrible, Horrible, No Good, Very Bad Kids,” the episode references and unpacks the first scene of the pilot where Bob tells his children, “I love you, but you’re all terrible.”

While the series, renewed until at least Season 13 with a movie set to premiere next year, has amassed a devoted fan following, it didn’t start out that way. Bouchard recalled the moment where he had to fight for the fate of the show, fretting over each character’s facial expression and if the series would be picked up.

“I felt nervous, glad, sort of this mix, and I still, to this day, in a funny way, have nostalgia about the days when it was fighting for the pick-up and looking at the ratings with fear, only because it sharpens your senses. It keeps you real honest. You got the fate of the fans and a lot of people’s livelihoods that are on your shoulders and you don’t really take your eye off the ball in that situation,” Bouchard said.

Fast-forwarding to the fourth or fifth season, when the show reached solid footing, Bouchard was told by a network executive that the series was going to run forever, and it was up to the team how long they wanted to keep going.

“I, routinely, feel that in order to do this show where no one ages and we just keep exploring the same year of their lives over and over again — hopefully for another 10 years, at least — then it’s almost like we can’t look ahead,” Bouchard said. “You have to live in this eternal present moment.”