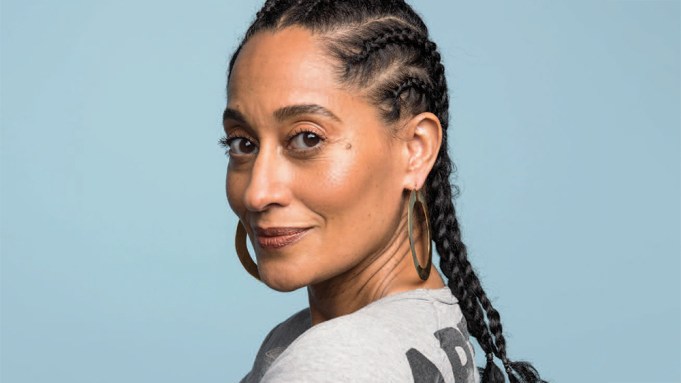 Tracee Ellis Ross certainly welcomes the Television Academy nominating a record number of Black actors for 2020 Emmys, but she also recognizes that it’s long overdue. “It’s about time,” Ross, who goes into the big night as a four-time nominee for her work as Dr. Rainbow Johnson on ABC’s “Black-ish,” says on Thursday’s episode of the Variety and iHeart podcast “The Big Ticket.” “I don’t know what’s been happening. It’s ridiculous. This is like a joke to me…At this point in our lives we’re still saying it’s a great year for people of color? It’s like, ‘Oh, come on. What are you guys doing?’”

The ceremony should celebrate the industry, she says. “I think part of what all of us have learned is you need to cherish the special moments, cherish the joyful moment,” says the actor, who starred earlier this year as a pop diva in the film “The High Note.”

Yet Ross, 47, believes more important goals are at stake right now than taking home the gold. “Don’t get me wrong — I would really like to win an Emmy. But more than that, I would really like people to vote in the general election and get informed,” she says, just days before presidential hopeful Joe Biden would announce California Sen. Kamala Harris as his running mate.

How are you holding up in quarantine?

It’s an adjustment. You know, trying to figure out how to stay safe. We’re going to be back on “Black-ish,” and it’s so bizarre.

When do you go back?

We had our first table read, and we’re sort of trickling in in sort of small ways, but I think we’re actually officially back in production on Aug. 24.

The table read was virtual?

Yes. I was really worried actually because we have really fun, hilarious table reads, which is a testament to the writers and a testament to the chemistry. It’s just special, and I was worried that Zoom was going to rob us of the thing that starts the beginning of each episode in such a magical and special way. But it was great! Our chemistry translates through the Zoom, and the writing was translating through the Zoom.

Congratulations on your Emmy nomination, your fourth one. Does it ever get old?

No! Are you kidding me? I will tell you though that it was not on my radar at all. I literally did not even know it was happening that morning. So when I turned on my phone, I was like, “What is going on?”

You really had no idea?

My attention is on other things, like my laundry and changing my sheets and mopping my floor and Swiffer-ing. I like everything just so, and that requires a lot of attention. And to be honest, I love this part of my life. I never get to do it — the cooking, cleaning, the being tethered to my own experience. I’m usually running through the house scarfing food down while I’m doing 17 other things.

Let’s talk about you making your singing debut in “The High Note.”

What a treat at this age really, finding something that I’ve always wanted to do and be like, “Oh, not so bad. That’s OK. I could do that.”

Were you nervous because of who your mom is? She is Diana Ross.

I was terrified because of my mom and the threat of comparison, and we live in a cancel culture so people are real quick to decide you suck. But it was so worth it. It was so worth walking through the fear and toward a dream. I felt complete freedom and liberation on the other side. I’m so grateful I took the leap.

What was it like playing the songs for your mom?

There was nothing about it like, “I’m playing my songs for Diana Ross.” Also with my mom, her kids can do no wrong. I think that the fear for me is that she wouldn’t be honest and she just says it was great. I have to play it for other people because she would be like, “It’s incredible. I’m crying. Look at what you’ve done.” But then I play it for the world, and they’re like, “That’s garbage.” But she just felt so much pride because she’s known how long I wanted to sing.

I have to ask, what do you think will happen in the election?

Every election is incredibly important. It is urgent always for those that are most vulnerable and that are the most affected by the inequity that is built into the fabric of this country. But we’re in a particularly urgent time right now. This is not a time to stick your head in the sand. This is not a time to claim or to think that your vote doesn’t matter. We say it every year, but there is a genuine urgency to this. I think democracy is at stake.

This interview has been edited and condensed. You can listen to the full interview with Ross above. You can also find “The Big Ticket” at iHeartRadio or wherever you listen to your favorite podcasts.