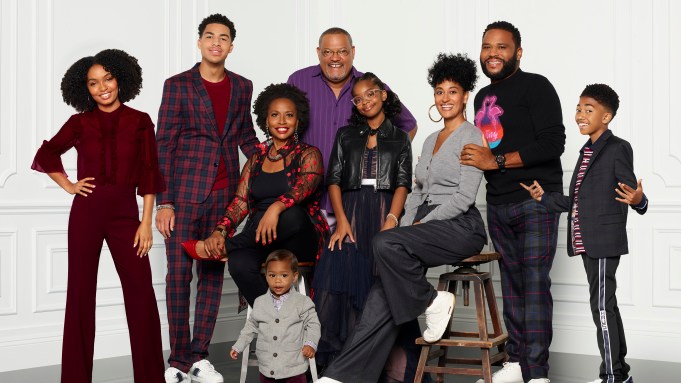 Kenya Barris has a lot on his plate already with three comedies in the “ish” universe already airing, as well as #BlackAF on Netflix (not to mention his overall deal to create new content with the streamer in general) — so what made him want to deliver a fourth “ish” series in “Old-ish,” starring “Black-ish’s” Laurence Fishburne and Jenifer Lewis?

“Everyone’s been wanting to see Pop and Ruby together because they’re basically together anyway,” Barris said during a virtual panel for “Black-ish’s” upcoming season on Tuesday. “It’s the weirdest divorce I’ve ever seen in my life. And truthfully in real life there is a huge recurrence of second time around in the older demographic…people are living longer and having experiences later in life, and it was just finding something that we felt we could tell a good story [about], that fit with the brand and what we’re doing.”

Barris went on to add that having a good relationship with his partners at ABC means they can “have fun” with the content being created. “We won’t do it unless we feel good about it,” he said. “Old-ish” has “been long-thought about and hopefully delivers in a way that is thoughtful and funny and special.”

The company being receptive to the voices behind the show, Barris said, has been essential in other areas, as well, including finally putting the “Please, Baby Please” episode that ABC had never aired on Hulu. “This was more of a situation of ‘the timing is right,'” he said of that episode finally streaming this summer. “We’re in a different place with the team. Hulu was the right place for it. It’s a big part of the family — of what ABC-Disney is and what they can do. ‘Black-ish’ does very well on Hulu, and I think it was a way to drive people to that and to show what kind of a show it can be in streaming. I really feel like when we [would have] put it on it would have been great, but it was just as received and just as timely now.”

Network brass listening to concerns about having “voices muted in a time like this” also played a part in getting the show added to the fall schedule after it was originally scheduled to debut mid-season, actor and executive producer Anthony Anderson said. He shared that he had a conversation with “the powers that be” at the network to explain that keeping the show off the air at such a pivotal time in history would be “a disservice to our community, a disservice to our audience and a disservice to our show.”

Not only is “Black-ish” back on the fall schedule with its seventh season premiere, but just a few weeks ahead of that, it will drop a special two-part election episode that is a mix of live-action and animation — the latter an idea brought up by actor and executive producer Tracee Ellis Ross out of her “desire to stay safe in COVID,” she said. “In my conversation with Karey Burke, I was like, ‘What are some of the ways we could get back to work quickly?'” Because she knows the show can do beautiful animation — and already has, as evidenced with the “Juneteenth” episode, for example” — and she was just not ready to return to set as early as it would have required to shoot the episode fully live-action, she brought it up, and it came to be.

The election special is directed by Oscar winner Matthew A. Cherry, who previously directed “The Gauntlet” episode of the sixth season of “Black-ish,” as well as an episode of its prequel spinoff “Mixed-ish.” About working with Cherry, Fishburne said: “Matthew Cherry is like working with Iron Man and we’re all the Avengers.”

Stacey Abrams guest stars in the special as herself, and Barris also lends his voice to the second half of the special. Seeing himself animated, Barris said, made him realize “I’ve had a rough road, guys. I’ve overachieved, to say the least.”

The art of “Black-ish” is also getting expanded through new key art for the upcoming season, which Kadir Nelson has been tapped to paint.

Nelson describes his own art as creating “expressive and emotionally resonant paintings that connect with viewers from all walks of life. I often revisit themes of American history and the journey of the hero. Primarily through two-dimensional oil paintings, I utilize dramatic lighting and perspective, dynamic compositions, robust and subtle palettes, and varied textures to create a visceral visual experience for the viewer.”

“I feel that art’s highest function is that of a mirror that reflects the beauty of the human spirit,” Nelson said in a statement. “I’m thrilled and honored to have been asked to create the key art for ‘Black-ish’ on ABC. I’m a fan of the show, and it’s especially pleasing to have met and worked with the cast and creatives.

“Black-ish” returns to ABC with a special two-part episode about voting on Oct. 4 and will then kick off its seventh season proper on Oct. 21. Watch a preview of the new season above.