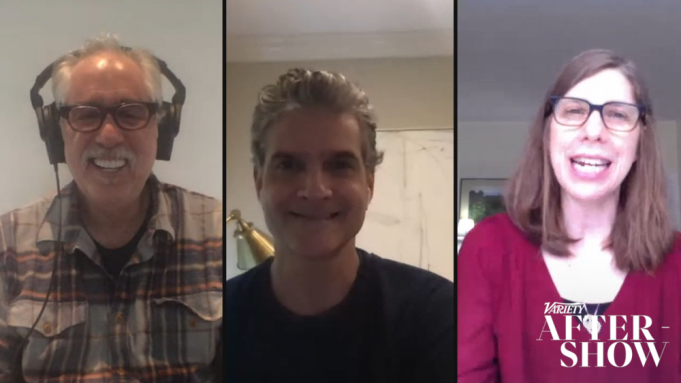 SPOILER ALERT: Do not read if you have not seen “The New Decas,” the season 5 premiere of Showtime’s “Billions.”

Can the group of hardcore characters who fuel the “Billions” universe overcome their baser instincts to find success and happiness? These are the broad themes of the fifth season of “Billions,” Showtime’s twisty-turny drama series set against the backdrop of New York’s investment and high-finance community.

Brian Koppelman and David Levien, series co-creators and showrunners, join the Variety After Show, presented by National Geographic, to break down the season premiere and offer some insights about the rest of the season ahead. The opener, “The New Decas,” was penned by Koppelman and Levien and directed by Matthew McLoota.

In the Q&A with Variety business editor Cynthia Littleton, Koppelman notes that the challenge of steering a new season is always to take the characters to new places while continuing the overarching storylines.

“It’s really important that we honor what we set up at the end of last season but not pay it off in exactly the way you might expect,” Koppleman says.

The season 5 premiere introduces a new foil for Damian Lewis’ alpha-male hedge-fund titan Bobby Axelrod — Mike Prince, a billionaire rival played by Corey Stoll. Axelrod is once again on a journey of “figuring how to feel good and gets a little bit distracted on that path by running in to likes of Mike Prince, who gets in his windshield in a big way,” says Levien.

During the half-hour interview, Koppelman and Levien discuss in broad strokes the challenges ahead for Chuck Rhoades, Paul Giamatti’s crusading New York state Attorney General, Wendy Rhoades (Maggie Siff), Axe Capital honcho and Chuck’s estranged wife, and Taylor Mason (Asia Kate Dillon), the investment genius and once-and-future Axe Capital player who is believed to be working with Chuck Rhoades to bring down Axelrod — or are they?

Koppelman and Levien offer insights into the production of the episode that includes a visit from WWE star Becky Lynch and a visit to a “rage room,” which was sparked by a gift to the showrunners at the end of last season by actor Samantha Mathis. The two also discuss how the pandemic-related shutdown of production in mid-March forced them to delay work on the final five episodes of the 12-episode season.

“I’m sure there’ll be some Purell bottles on people’s desks,” Koppelman says when asked if the final episodes will be adjusted to incorporate the coronavirus outbreak into the story.

The showrunners reveal that the lineup of directors for “Billions” season 5 is an eclectic list that includes Lee Tamahori (“Once Were Warriors”), Laurie Collyer (“Sherrybaby”), Shaz Bennett (“Alaska Is a Drag”) and series co-star David Costabile, who plays Axe’s venal lieutenant Mike “Wags” Wagner.

As “Billions” embarks on its fifth year, Koppelman and Levien say they feel the show has no shortage of material to mine for seasons to come, even at a time when the life span of many TV drama series is shortening.

“As long as it stays fresh and exciting to work on and as long as the network wants to keep going, we’ll keep doing it,” Levien says. “Right now we’re completely animated about the show.”