Pamela Adlon on Using the C-Word in ‘Better Things’ Season 4: ‘It’s About Who’s Saying It’ 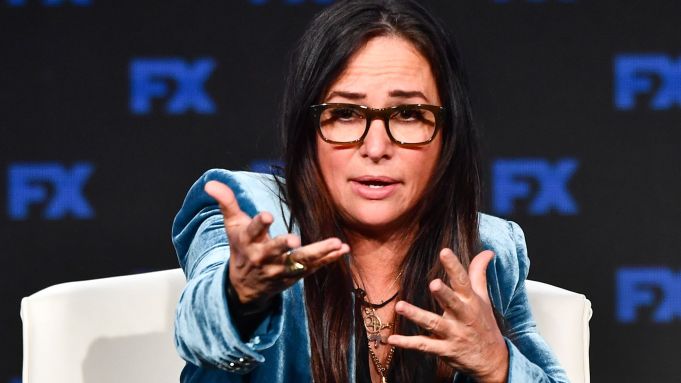 The upcoming fourth season of “Better Things” is out to deconstruct how arguments between mothers and daughters can escalate so far as to get to a point where they are calling each other c—s.

The scene was written and performed, but creator, writer, producer, director and actor Pamela Adlon admits she hasn’t yet had the conversation with Standards & Practices to know if it can definitely stay in the episode as currently cut together.

“I hope that we can keep it because it’s not gratuitous — I don’t believe so. I believe it’s massively important and layered,” Adlon said at FX’s Television Critics Assn. press tour panel Thursday. “It’s not about the sensationalistic aspect of this word. It’s about who’s saying it and the levels they go through.”

In the scene, Sam (Adlon) comes into her eldest daugher Max’s (Mikey Madison) room as she’s getting ready for work to express her concerns that she is taking her pain about her period out on those around her. As the scene goes on, they begin to fight about everything from Max potentially moving out — including possibly moving to her father’s house instead — to the fact that Max has her first job and thinks she is going to get fired from it. It gets to the point where Sam uses the c-word first, calling Max one.

“Things can escalate when you’re living in the same house, and it was kind of born from using this word that is basically probably the lowest word you could use for a woman, and it’s a mom saying it to her daughter. And then the daughter claps back and says, ‘No, you’re that word,’ and it just loses its meaning,” Adlon said.

The scene then flips, with Max saying she is one and her mother saying she’s not, and they go back and forth that way for a minute.

“It’s this big moment for the women, and it’s a diffusion. It’s a massive moment to know that you can survive this, and when you’re in a family, you can say all of this stuff to each other, but if there’s true remorse or love then you can live with it,” Adlon said.

The argument depicted in the show is one Adlon pointed out was “very much constructed just for this show” and not based on anything that happened with her own children. However, the idea of going from being really mad to OK in a short amount of time is one that stems from her childhood when she recalled a lot of nights going to bad angry with her father only for him to say hello to her in the morning like nothing was wrong when she was still thinking, “What the f— was that?”

“I’ve been figuring things out on my own,” Adlon said of parenting, so she has tried to infuse that into the show. Previously that came in when her character sat with her daughter to read a play because her child left it to the last minute as an assignment.

Adlon recalled Celia Imrie, who plays her mother on the show, being on set for that scene and commenting that she wished she had done things like that with her own child.

Adlon shared that she stepped into the writers’ room of Season 4 with themes, including rain, couples, togetherness and being alone. “These were all things that I wanted to build on,” she said. “I have these long drafts folders and notes and directions I want to go in, but it’s little details that I would walk in with: ‘This thing happened.'”

One of the latter was being in line to pay for items in a retail space with her daughter when another mother came in frantically looking for her own child who had gone missing in the store. “No one stepped out of line to look except me and my daughter,” she said. That made it into the fourth season.

Adlon has come a long way since the series premiere of “Better Things,” a series he co-created with Louis C.K. but now runs on her own — and also directs every episode. One of the hardest things she has had to do over the course of the run thus far is “maintaining the integrity.”

In the fourth season, “Better Things” calls back to Max telling Sam the middle child, Frankie (Hannah Alligood) is a boy, something she said in the first season but now claims she never said. At the time, Adlon recalled, people who were close to her in production were saying she needed to bring in a trans advocate.

“Why?” Adlon remembered asking. “Because Frankie’s trans” was what other told her, but she would respond, “Who said Frankie’s trans? It was an extremely hot time. And then I’m in the editing room and my editor was trans and three people on my show were trans that I never pointed out.

“Everyone’s extremely fluid in our house,” Adlon said of her own family. “There’s a huge difference between sex and gender. She was 12 years old at the time. Thank God I was able to keep my focus. The hardest part about making this show is not all the jobs that I do; the hardest part is maintaining the integrity of all of the characters and stories and not being pressured into making it more powerful or timely.”