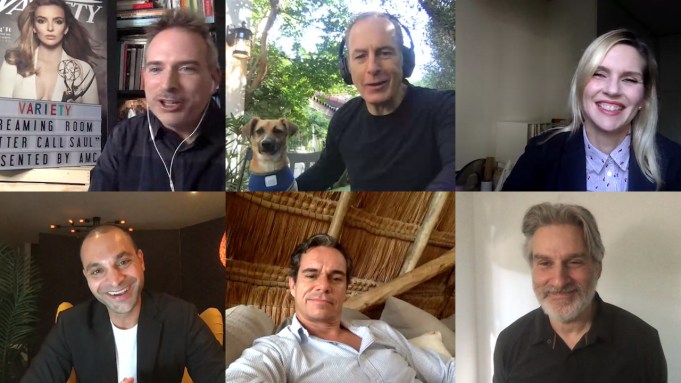 When “Better Call Saul” concluded its penultimate season this spring, the “Breaking Bad” prequel series had definitely entered the precipice of entering the grim criminal underworld of its predecessor. Lawyer Jimmy McGill (Bob Odenkirk) now deals with the drug cartel under his pseudonym Saul Goodman, and has brought his new wife Kim Wexler (Rhea Seehorn) into its orbit.

With only one season left to go, there are dozens of questions of how things will wrap up and set the stage for “Breaking Bad.” In a conversation moderated by Variety senior editor Michael Schneider, Odenkirk, Seehorn and fellow cast members Tony Dalton and Michael Mando, along with series creator and executive producer Peter Gould, joined the Variety Streaming Room after a screening of the Season 5 finale episode to dissect some of the season’s biggest moments and reflect on how the characters have evolved since the show began back in 2015.

Odenkirk began the conversation by talking about where McGill is now, and how much of him is left as opposed to the slimy Saul Goodman that fans know from “Breaking Bad.”

“I feel like [Jimmy] has come to some terms with being Saul where he’s very consciously compartmentalized himself,” Odenkirk said. “He’s decided, ‘I’m Saul at work and I’m Jimmy at home and that’s going to be okay. That’s going to work out.’ Of course, he’s seen already how those two things have overlapped in a dangerous and scary ways… Weirdly in the past I think there’s been I think almost an internal struggle. Now he’s consciously embraced the character of Saul, and yet he’s also said, ‘It’ll belong in this one part of my life and I can keep it separate.’ Now he’s going to face the challenge that maybe that’s not true.”

Nodding along to Odenkirk’s comments, Gould then voiced his agreement about the gradual transformation of the character.

“I don’t think this is a story of a guy who gets hit by a lightning bolt and becomes a different person,” Gould said. “This is about a guy who’s trying on different identities [and] looking for the one that’s going to work for him. The identity that maybe is most important to him is the identity he has with Kim Wexler. I think that it’s interesting because, when we started this out, I don’t think we thought of it as a love story, but in a lot of ways that’s what it’s become.”

When the series began, Kim Wexler was a moral compass of sorts to McGill, warning him against cutting corners while indulging in the occasional thrill of a grift with him. Now, she has met with the cartel face to face and doesn’t seem eager to back down. Seehorn explained her excitement as an actress about the trajectory of her character in the last season.

“This season was so challenging, and I mean that as blissful,” Seehorn said. “It was so much fun to have to do the mental acrobatics in your head for all of our characters. Yes, I would get scripts and be surprised as a fan. ‘Wow, now she’s doing this,’ but as soon as you sat down to do the math, because of the brilliance of Peter and our writers, I could always see where it came from. Why it was something that was in her and is at a boiling point. Whether it’s being revealed or it is introduced anew are very interesting questions. I think all of the characters in the series deal with that idea of, ‘Is this something that’s being brought out now or something that was always there and suppressed?'”

Meanwhile, Michael Mando’s Nacho wants nothing more than to exit the world of the cartel since his father’s life is being threatened. Mando commented on Nacho’s journey from an up-and-comer in the organization to being in over his head.

“It really is a redemption story,” Mando said. “It’s a story about someone who’s made a mistake when they were young and who’s doing every thing he can to do the right thing. He’s surrounded by all these people who are at war with each other who see him as an asset. It’s hard. I think it’s really heartbreaking for me. I think it’s heartbreaking for the father. God, I guess I’m a bit of a romantic and I hope that there’s a happy ending to this somewhere.”

Gould also touched upon a moment in the finale in which Dalton’s Lalo Salamanca crawls through an underground tunnel to escape an assassination attempt.

“One of the great things about this whole cast is these guys are very physical actors and we’re very lucky that they are,” Gould said. “Every single one of them, they act from the tips of their toes to the tops of their head. Tony, I remember watching him crawl through that tunnel like a bat out of hell. It was really exciting and it was hard for the crew to keep up with, but it felt exactly right because the guy is crawling for his life. He’s furious and he’s scared. Just the adrenaline in that moment was just really exciting to watch… As writers, we try to give these guys situations where they can use their physicality, not just the acting in here. A couple of seasons ago, Rhea had a whole scene where she was chasing a runaway car that almost hit an oil derrick. Michael’s jumped over roofs. Bob has been in dumpsters. I don’t know. It’s a good question. Why are we doing this to these guys?”

“It’s a competition,” Odenkirk said. “We’re trying to win Emmys, but we’re also trying to crush each other.”

Watch the full panel below.