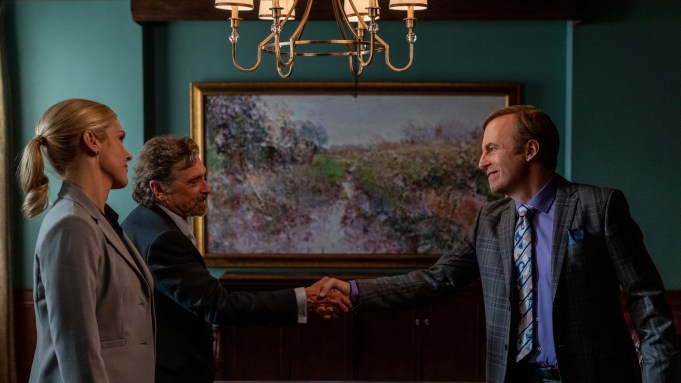 SPOILER ALERT: Do not read if you have not yet watched the sixth episode of “Better Call Saul” Season 5, titled “Wexler v. Goodman.”

Selling the dramatic cliffhanger at the end of Monday night’s episode of “Better Call Saul,” titled “Wexler v. Goodman,” proved a challenge for even star Bob Odenkirk. In a lively chat on “Variety After-Show” on Instagram — where Odenkirk answered questions from fans — following the episode’s airing, he also revealed that one of the season’s last two remaining episodes was particularly taxing.

“I almost got killed doing one of these episodes. Just shooting the entire thing almost killed me,” he said.

Here are the top five revelations from Variety’s interview with Odenkirk. Watch the interview in the video above.

1. Fans who suspect Kim’s marriage proposal serves an ulterior motive aren’t wrong. By the end of “Wexler v. Goodman,” it’s clear that Jimmy McGill/Saul Goodman’s (Odenkirk) relationship with girlfriend — and fellow legal manipulator — Kim Wexler (Rhea Seehorn) has deteriorated, almost to the point of no return, when Wexler proposes two dramatic options: they either break up or get married.

“As an actor, you kind of ask yourself, sometimes, if it’s going to be something you can make feel real, like make it feel legitimate,” said Odenkirk, adding that fans who suspect that a Wexler-Goodman union is motivated by “spousal privilege” (where a defendant can avoid having a spouse testify against him in a criminal trial) aren’t wrong.

“But it’s a little more than that. It’s a legal thing primarily, but at the same time, you can’t discount there’s a closeness between the characters that grows because of it,” he said.

2. His favorite cameo from “Breaking Bad” was Robert Forster. Of the many “Breaking Bad” cameos sprinkled throughout the show, there’s one that Odenkirk appreciates the most: Robert Forster, who played Ed Galbraith and passed away last October. Forster had filmed his portion of a scene in “Better Call Saul’s” fifth season premiere (a phone conversation between their characters) months prior to Odenkirk filming his. So while the two didn’t get to work together in person, Odenkirk remembers the late actor fondly.

“He was one of the greatest people I’ve ever met in show business. An incredibly sweet person who genuinely loved show business and loved acting and was so thankful and happy every day on the set,” Odenkirk said.

3. It’s harder to play Jimmy McGill than it is to play Saul Goodman. Mapping the Jimmy McGill-Saul Goodman-Cinnabon Gene evolution has been a delight, Odenkirk said. So have the moments where he taps into his sketch-comedy roots, which have always been — in the violent, duplicitous, at times nihilistic world of both “Breaking Bad” and “Better Call Saul” — a narrative balm and what made Saul Goodman such a fan favorite in the first place. Odenkirk personally relishes the scenes with the college film crew (played by Josh Fadem, Hayley Holmes and Julian Bonfiglio) and the “squat cobbler” gag from Season 2.

But he says playing Jimmy is much more challenging than playing Saul. “Jimmy is harder to play, but Jimmy is more rewarding to play. Saul is an effort, but he’s a performance,” he said.

As for whether or not Gene, the Cinnabon manager at an Omaha mall that becomes the next Jimmy/Saul iteration, has any “Jimmy” left in him?

“Not much, but some,” Odenkirk said. “I hope that that part of Jimmy that’s still inside of Gene is the part that will come through in the end and maybe save him, make his life whole again.”

4. There’s one thing about Saul Goodman in “Breaking Bad” that doesn’t make sense to him. “Better Call Saul’s” next season will be its sixth and final one, which Odenkirk is looking forward to, having played the role for a decade now. He said he’s also excited to have the writers answer some of his own burning questions, like why Kim is nowhere to be found in “Breaking Bad” (like fans, he suspects “something bad happened”) and how Saul learned to speak Spanish.

But there’s one moment from when Saul first appears in the “Breaking Bad” universe in 2009 that still doesn’t sit right with Odenkirk: “The one thing that doesn’t fit yet is when his assistant is walking away in the first scene, and he makes some wisecrack about wanting to grab her ass. Why would he do that? I don’t understand.”

5. Coronavirus has touched his family. Odenkirk revealed that a family member has tested positive for — and is recovering from — coronavirus. Like most everyone else, he has been social distancing with his family at home.

“I’m writing every day. I’m working out every day. I’m walking my dog a lot,” he said, noting that he is busy writing a comedy with fellow actor/writer Dino Stamatopoulos. He hopes other creatives are taking time to do the same.

“In show business, a lot of people have a desire to make their way — either become an important writer, actor, director, whatever you want to do [and] especially right now, you cannot force your way to the next place you want to go,” he observed. “You have to wait in line, and you have to develop your skills. And one thing you can always do is you can always work on yourself.