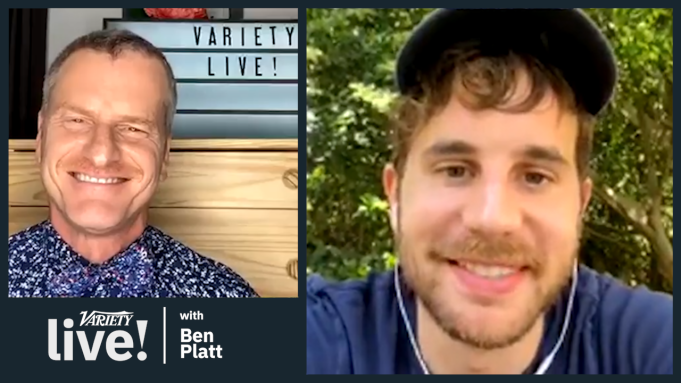 Ben Platt may have looked cool and collected when he first appeared on stage in his new Netflix concert special, “Ben Platt: Live From Radio City,” but he wasn’t exactly calm.

“It felt very surreal and the whole first song, I felt very scared and tense and tight,” Platt says during an interview on “Variety Live!” on Instagram. “And then as soon as we got through the first number, it was just like a free fall. It was great.”

The film was shot on the last stop of the Tony winner’s tour for his debut album “Sing to Me Instead.” In between songs — which included covers of Elton John and Brandi Carlile hits — Platt opens up about coming out as gay to his parents (he was 12 and called them while he was on a school trip to Israel), his late grandmother and more than one failed romance.

“I wanted it to feel like the album was a confessional in a way. I wanted you to gain something from seeing the show live that you didn’t gain from the album,” the “Politician” star says. “And that was putting all of the songs in as personal and specific of a context as possible, so that people really know exactly where they’re coming from. I think apart from just falling in love with the song musically, the way to really connect with one is to know exactly where it was born.”

The film opens with Platt getting ready backstage, which he says was inspired by similar footage of Liza Minnelli in her iconic 1972 television special “Liza with a Z.” Minnelli’s influence spread to other parts of his on-stage performance.

“I loved that it was so imperfect,” Platt says. “You see her wiping her sweat with a towel, you see her taking a breath. It’s not too cleaned up. [Director] Alex Timbers, who directed [my special] beautifully, he and I really wanted it to feel that live and imperfect and that was a little hard for me as a very anal, perfectionist, type-A person. I wanted to go in and clean up every little note and every little shot, like ‘Can we fade out the sweat?’ But I think it’s worth it. I think it really feels like a live experience, like a one-time thing that happened once and will never happen again.”

As for future music, Platt says he’d love to work with Ariana Grande and Cynthia Erivo, whom he went to see five nights in a row when she was in the “Color Purple” musical on Broadway.

Platt’s other Netflix project, the second season of “The Politician,” premieres June 19. The state senate race between Payton (Platt) and incumbent Dede Standish (Judith Light) gets heated and nasty. With Payton and his childhood cohorts a little older, “I think that allows for a bit of a sharper, focused humor and a little more of a raunchiness that’s fun, and it’s all a little bit more streamlined,” Platt says. “I think we have so much to set up in the first season, so much world to create and backstory to tell, and now we get to really focus on the specifics of this election. And it’s in New York, which we love.”

And yes, he’s “workshopping” his own drag queen name. “It’s a ‘Sound of Music’ reference: Refafa LaTiti, which I like, but the jury is out,” Platt explains, laughing. “She’s a musical comedy queen, if you will. A lot of lederhosen [and] a lot of Austrian influence.”