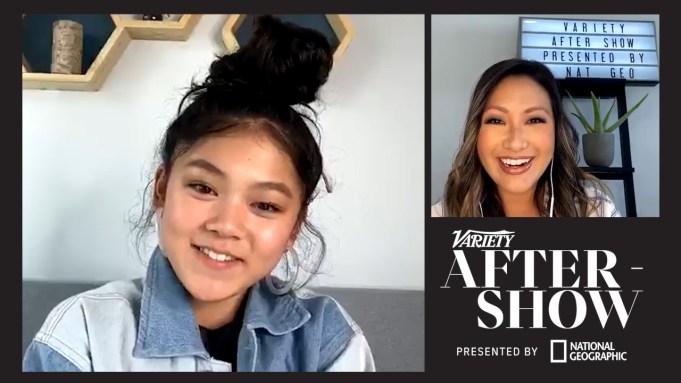 For many Asian Americans who grew up reading “The Baby-Sitters Club” book series in the ‘80s and ‘90s, Claudia Kishi is something of a pop culture icon, so much so that she’s the center of a new Netflix documentary, “The Claudia Kishi Club.”

But Momona Tamada, 13, who stars as Kishi in the streaming platform’s series “The Baby-Sitters Club,” hadn’t fully grasped the enduring influence of her character until recently (the role was also played by Tricia Joe in a 1995 film adaptation).

“When I started researching a lot about Claudia, I definitely saw how much of an impact she made on so many people’s lives, which is so cool. That I get to be that for younger generations — it’s, like, crazy,” the Japanese Canadian actor tells Variety on the “After-Show” presented by National Geographic. “I’ve been getting lots of emails saying like, ‘Oh, thank you so much for being this representation for me because I related to Claudia so, so much.’ And I think that’s just incredible.”

Tamada, a competitive dancer since age 4, is still early in her acting career but has already built a resume that includes roles in AMC’s “The Terror” and as a young Lara Jean in Netflix’s “To All the Boys I’ve Loved Before” films. She calls “To All the Boys…” star Lana Condor and Natalie Portman her acting role models.

As the artsy, academically disinclined vice president of the Baby-Sitters Club, Kishi is the fashion-forward and fun-loving heart of the critically acclaimed show. Tamada says she sees a few similarities between her and Kishi, including their love of art and their shared Japanese heritage.

Unlike Kishi, though, Tamada says she earns good grades in school and speaks Japanese, although she admits she’s working on keeping that up, as evidenced when her grandmother (who lives in Japan) visited her in Canada before Tamada started filming the show. She recalls encountering a language barrier.

“So, that was very difficult to me, and that was an emotion that I could apply to playing Claudia, which was really cool,” Tamada explains.

“My friends are all like, it’s so funny to hear you say, ‘menstruation,’ and it’s like, everyone’s like laughing about that,” she says with a giggle, touching on the show’s first episode, where Kishi is shown making a sculpture on the subject.

The show also includes nostalgic nods to its roots, like the landline phone which the BSC uses to communicate with potential clients. A Zoomer herself, Tamada says she was already familiar with landlines having played with toy versions of them as a child. But she was surprised to learn, via this interview, that they were once necessary to access the Internet. She lights up at the revelation.

“That’s so cool,” she says before adding, thoughtfully, “I mean, it sounds like that would be a little difficult.”

Watch the full interview with Momona Tamada on the “After-Show” above.