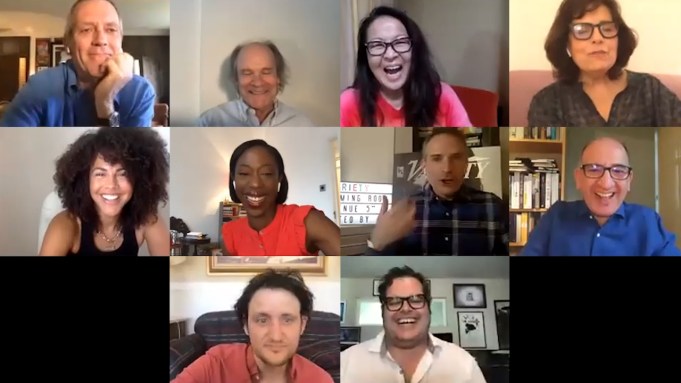 Set 40 years into the future, series creator Armando Iannucci takes viewers into his reimagined world on the maiden voyage of “Avenue 5.” Although it will take another four decades before anyone can praise Iannucci on his predictions, the hilarious HBO comedy leaves fans wondering if flashy tracksuits, inadequate personnel and cheap billion dollar ships will be a part of everyone’s unforeseen future.

Recently, “Avenue 5” stars Hugh Laurie, Josh Gad, Zach Woods, Rebecca Front, Suzy Nakamura, Nikki Amuka-Bird, Lenora Crichlow, Ethan Phillips and Iannucci sat down with Variety’s Michael Schneider in the Variety Streaming Room to breakdown the scientific research they did for the series and dissected the characters of the show.

The sci-fi series takes place aboard a billion dollar space cruise ship known as Avenue 5. The titular vessel is set for an eight-week journey around Saturn, but when the ship suddenly encounters technical difficulties, it’s up to suave captain Ryan Clark (Laurie) and his seemingly underqualified crew to calm the disgruntled passengers and find a way to deal with the unexpected events onboard.

Although it is impossible to accurately predict what the future might hold for humanity, when it comes to space/aerial crafts Iannucci did not stray too far from what the approaching technological advances may soon look like. “I went to the Jet Propulsion Laboratory and I went around SpaceX,” said Iannucci on what kind of research he did for the series.

“The first thing I was overwhelmed by was how advanced [Iannucci] was in his knowledge and enthusiasm for space travel,” said Laurie. “I thought we were going on sort of a jaunt…it rapidly became apparent that he was incredibly––is incredibly knowledgeable and enthusiastic about the whole notion of space travel.”

When things go awry the crew soon finds out people in certain positions are not as equipped at their job as it appears to be. For the character of Herman Judd, played by Gad, Iannucci found a little inspiration from today’s well-known defamed business figures to develop the eccentric rich owner of Avenue 5.

“I was fascinated though, by the evolution or de-evolution, if you will, of what the entrepreneur has become in the early 21st century,” said Gad. “And so [Iannucci] and I sort of talked about people like Billy McFarland, a huckster, as you said, the huckster behind the Fyre Festival or Elizabeth Holmes who created Theranos. And these people are so addicted to selling a product, but don’t have the savvy to actually make the great product.”

While many of the crew struggle with navigating how to control the ship gone askew, Karen Kelly (who is mocked by her first name that is now associated with the slang term for a self-entitled older woman who always demands to speak to the manager) becomes the character who rises to the top.

“She absolutely is thriving on this chaos, ” said Front, who plays the role of Karen. “I think the biggest problem for [her] will be if things ever start to go right on Avenue 5 and they just get back on the original trajectory and head to Earth, Karen will just collapse.”

Back in February it was announced the show would be returning for a second season with the premiere date still yet to be confirmed.

Watch the full panel discussion in the video below.