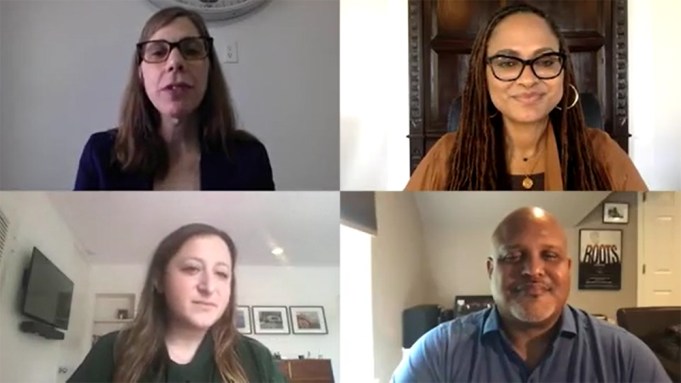 Ava DuVernay, Sarah Bremner, and Paul Garnes of Array Filmworks joined the Variety Virtual TV Fest on Wednesday, detailing how they have used Array as a means to develop and nurture new talent.

“‘Queen Sugar’ is a very special show to us because it was kind of the TV moment that launched this conversation on, ‘Hey, we need to build a longterm crew to tell a story about a family in Southern Louisiana,'” Garnes told Variety business editor Cynthia Littleton. “And one of the key things that we found over the years is the more we can infuse the crew with storytellers, people who have a point of view, people who can contribute to that process, the more robust that storytelling is in the long run.”

DuVernay has become passionate about TV in the past few years, saying “That’s where the best stories are happening.” However, despite being an accomplished feature director, she had trouble landing her first TV directing gig.

“I think the thing that we need to realize that is so really criminal is that women directors with feature film credits are seen as unproven in the TV world,” she said. “So I had won best director at Sundance, had had three independent features, but couldn’t get an episode of television.”

She said that directing episodes of TV is often a helpful measure for independent filmmakers looking to earn money to finance their films. Yet while male directors would be able to take advantage of this, DuVernay and others were left out in the cold. Through her and her team’s work on “Queen Sugar” and with Array, they have been able to focus in on the types of stories they want to tell.

“We’re not spending all day listening to pitches,” DuVernay said. “We are very clear about the kinds of things that we want to do. The ideas that we have are homegrown in house through our collaborators and we are seeking to expand those ideas first. That doesn’t mean that we don’t want to hear what the town is doing or hear ideas that might be in alignment with the vision, but there are many companies that have different configurations and ours is less about incoming (pitches).”

Bremner said that several of those who have worked on “Queen Sugar” have gone on to work with Array in developing their own new shows.

“We not only have worked with incredible female filmmakers on ‘Queen Sugar,” she said. “We also have taken into development some of their ideas for their next shows and are now championing them…That notion of family and having an ongoing creative relationship hopefully extending from one cool show into new development is a big part of how we try and continue to expand the types of stories that we’re telling.”