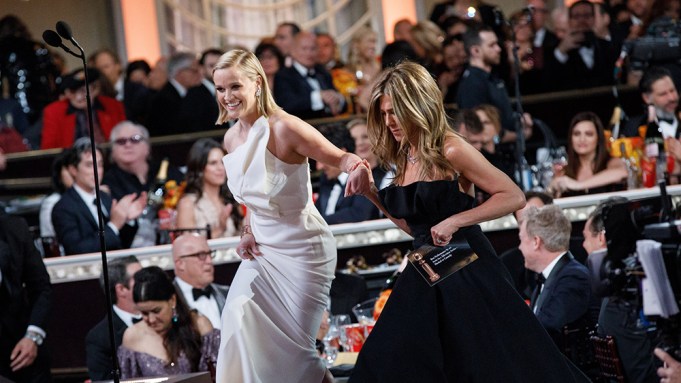 Apple TV Plus has been shut out at its first-ever Golden Globes.

The #MeToo-inspired series was nominated in two categories at the 77th annual ceremony: drama series and TV drama actress for both Jennifer Aniston and Reese Witherspoon. Neither star won.

Leading ladies Aniston and Witherspoon were expected to cancel each other out on the Globes ballot, where they were nominated alongside Olivia Colman of “The Crown,” Jodie Comer of “Killing Eve” and Nicole Kidman of “Big Little Lies.” As a series, “The Morning Show” faced stiff competition, too, nominated alongside the second seasons of both HBO’s “Big Little Lies” and “Succession,” and BBC America’s “Killing Eve,” as well as the third season of Netflix’s “The Crown.” HBO’s “Succession” picked up the drama series statue, while Colman nabbed the actress trophy.

Apple’s launch was highly anticipated, both from the business side and the content side, as it boasted high-profile series that included the small-screen returns of Aniston and Steve Carell in “The Morning Show,” as well as Jason Momoa in “See.” The new streamer kicked things off Nov. 1, just in time to be considered for winter awards season, and began with six high-profile awards contenders. In addition to “The Morning Show” and “See,” its other early dramas were the supernatural “Servant” and Ron D. Moore’s alternate history take on the space program, “For All Mankind.” Comedy “Dickinson” stars and is executive produced by Hailee Steinfeld. And Kathleen Barber’s novel “Are You Sleeping?” got the limited series adaptation treatment with “Truth Be Told,” starring and executive produced by Octavia Spencer. Only “The Morning Show” has cracked onto awards ballots thus far.

Apple follows in the footsteps of streaming giants such as Netflix, which began with one series — “House of Cards — dominating major awards attention right out of the gate. The difference, of course, is that when Netflix got into the originals game half a dozen years ago, it did so with a smaller volume than Apple did. Netflix earned its first awards recognition at the 71st Annual Golden Globes in 2014, picking up nominations for “House of Cards” in drama series, as well as TV drama actor for Kevin Spacey, TV drama actress for Robin Wright and supporting TV actor for Corey Stoll. Taylor Schilling of “Orange Is the New Black” also earned a TV drama actress nomination that year; Wright went on to win the trophy.

Amazon and Hulu got into the mix a bit later: Amazon scored its first Globes nominations at the 72nd annual ceremony in 2015 (for “Transparent” in comedy series and that series’ lead actor Jeffrey Tambor, winning both trophies), while Hulu cracked onto the ballot at the 73rd annual ceremony in 2016 with “Casual” and then in a bigger way the following year with “The Handmaid’s Tale” (a drama series nom and win, a TV lead actress nom and win for Elisabeth Moss, and a supporting TV actress nom for Ann Dowd).

For all three of these specific series, as well as their respective streaming homes, the first Globes recognition proved to just be the starting point. That will likely be the case for “The Morning Show” and Apple TV Plus, as well. “The Morning Show” will be eligible for its first Emmy consideration this year, while the platform is getting ready to premiere another awards contender in the anthological “Little America” from Kumail Nanjiani, Alan Yang, Lee Eisenberg, Emily V. Gordon, Joshuah Bearman and Joshua Davis.

“The Morning Show” launched Nov. 1 to mixed reviews but kept steady buzz going as subsequent episodes rolled out weekly. In November, “The Morning Show” executive producers Kerry Ehrin and Mimi Leder were on a panel at Recode’s Code Media conference in Los Angeles in which they addressed early negative reviews of the show. Leder in particular said she thought some of those responses came from those who were critical of Apple as a company.

“That reaction and that statement was based on some mixed reviews that we had that just didn’t feel warranted to me,” she told Variety. “It made me feel as though there are unfortunately people out there that want Apple to fail, that are not into streaming services, maybe because of the high caliber talent and the money involved.”

However, after receiving three Golden Globe nominations in December, Leder did say she wanted to “walk back from that statement.”

“Yes, the critics seem to love our show, and there are not as many Apple haters as I thought,” she told Variety. “And we are absolutely thrilled at the love we are receiving from the Hollywood Foreign Press. It’s just quite a humbling honor, and we are beyond proud of the work that we have done and are grateful at the recognition.”