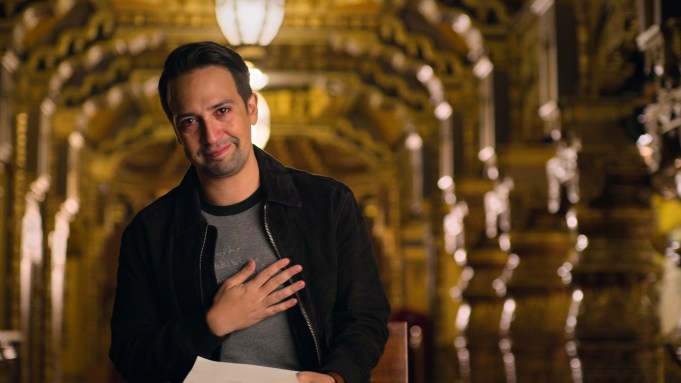 Inspired by Apple’s “Dear Apple” spots, “Dear…” takes an “inventive and cinematic approach to biographies of the most iconic figures in society today by using letters written by those whose lives have been changed through their work,” said the streamer. The first season, which will launch globally this spring on the service, will consist of 10 episodes that profile internationally recognized leaders including Oprah Winfrey, Gloria Steinem, Spike Lee, Lin-Manuel Miranda, Yara Shahidi, Stevie Wonder, Aly Raisman, Misty Copeland, Big Bird and more.

The advertising spots typically feature stories of how Apple products have changed their lives.

“Dear…” joins Apple TV Plus’s docuseries slate that includes the Cinema for Peace Award-winner “The Elephant Queen,” as well as upcoming projects that include “Visible: Out on Television,” “Beastie Boys Story” and “Dads.”

On the scripted front, Apple TV Plus will be debuting comedies such as “Mythic Quest: Raven’s Banquet” and the animated “Central Park” this year, as well as the adaptation of “Defending Jacob.” These series join a slate that includes the Golden Globe-nominated “The Morning Show,” as well as the Jason Momoa-led “See,” the psychological thriller “Servant,” Ron D. Moore’s space exploration “For All Mankind,” the Hailee Steinfeld-led “Dickinson, the Octavia Spencer-led “Truth Be Told,” the anthological “Little America” and more.