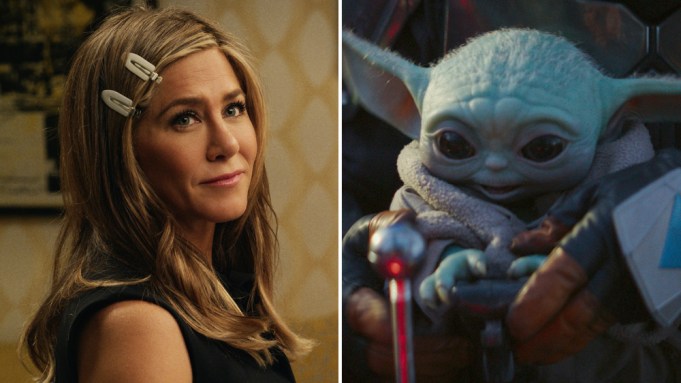 Baby Yoda is now an Emmy contender. So are several new streaming platforms.

Disney Plus, Apple TV Plus and Quibi all earned nominations from the Television Academy, with Disney Plus’ “The Mandalorian” making a surprise appearance on the best drama series list and Steve Carell and Jennifer Aniston getting nods in the lead acting categories for Apple TV Plus’ “The Morning Show.”

“The Mandalorian” nabbed a total of 15 Emmy nominations, in categories including sound editing, sound mixing, special visual effects, voice-over and stunt coordination, making it the most nominated program from a direct-to-consumer service that debuted in the last year. The voice-over nod went to “Star Wars” fan-favorite Taika Waititi for his performance as IG-11, the bounty hunter droid-turned Baby Yoda protector. Waititi wasn’t the only “Mandalorian” performer to receive a nomination, as Giancarlo Esposito broke into the guest actor in a drama category for playing the villainous, dark saber-wielding Moff Gideon. Lead actor contender Pedro Pascal wasn’t quite able to sneak a nomination, which isn’t all that surprising given he was under a helmet for the entire first season bar one scene.

The show’s surprise drama nomination will only serve to heighten anticipation ahead of its season 2 premiere later this year.

Disney Plus topped the new streamers with 19 nominations. Several other Disney Plus programs besides “Mandalorian” garnered notice, including “Forky Asks a Question” in the short-form animated category and “The World According to Jeff Goldblum” for hosted nonfiction. The hairstyling team from “A Celebration of the Music From Coco” earned a nod for contemporary hairstyling for a variety, nonfiction or reality program, while Angela Bassett got a nomination for narrating “The Imagineering Story” docuseries.

Meanwhile, much-maligned Quibi has 10 Emmy nominations to show for its work, dominating the short form categories with acting nods for Laurence Fishburne, Stephan James and Jasmine Cephas for “#FreeRayshawn,” Corey Hawkins for “Survive,” Anna Kendrick for “Dummy,” Kaitlin Olson for “Flipped,” and Kerri Kenney-Silver for “Reno 911!”.

Quibi’s “Most Dangerous Game” and “Reno 911!” earned nods in the best short-form comedy or drama series.

The nominations mark something of a new era for the Emmys, with a host of new streaming services in contention, and pushing legacy broadcast networks even further out of the spotlight. Of the programs with the most nominations, three of the top five — Amazon Prime Video’s “The Marvelous Mrs. Maisel,” Netflix’s “Ozark,” and “The Mandalorian” — came from direct-to-consumer platforms. (HBO’s “Watchmen” topped the list.)