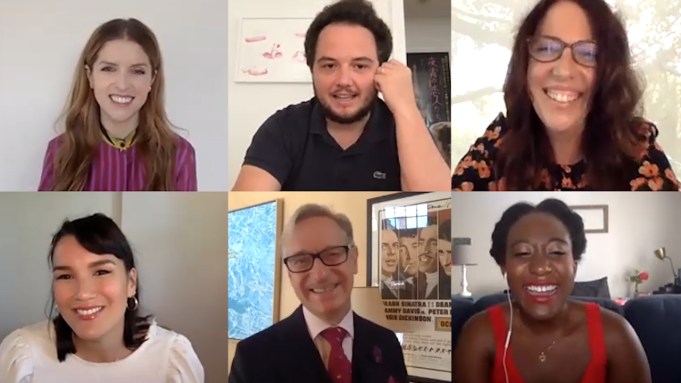 After screening the season one finale episode of HBO Max’s “Love Life,” Variety‘s Angelique Jackson hosted a panel discussion with Anna Kendrick, Sam Boyd, Zoë Chao, Bridget Bedard and Paul Feig to talk about its unexpected ending, writing their personal experiences into the show and what to expect in its second season.

Kendrick — who stars as Darby Carter and also served as an executive producer — said that although the ending may have been unexpected for some fans, it was exactly what Darby needed.

“[Darby] spent so much time being so inward focused and, ‘What is this relationship going to do for me? How is it going to fix me?’ Even as she’s getting more certain about who she is and what her boundaries are, to me, Darby’s such a different person from episode one to something like episode eight,” Kendrick said. “But, it really isn’t until all the way in episode ten that she is not looking to be validated. She knows she’s enough, so she can just be focused on, like, ‘You’re interesting. You might be somebody that I want in my life.’ Rather than, ‘Oh gosh, is this the person who’s going to make everything okay?'”

Co-showrunner and executive producer Bedard, affirmed that the ending felt just as unexpected to the writers as it may have to the fans — many of whom were rooting for Augie (played by Jin Ha) to win over Darby’s heart.

“We actually did, at one point, think it might be Augie. But as we got deeper in, we just felt like that seemed, first of all, predictable and also kind of left the viewer wondering why they even watched it, in a way, if you just circle back to that guy,” Bedard said.

Bedard found it imperative that the show was an accurate depiction of Darby’s growth, both internally and in the people she chose to date.

“I think we found a really good way to show how a person’s love life is actually a reflection of themselves and kind of an interaction with themselves,” Bedard said. “I think it would be impossible to show a love story that was not tied, at least for me, to who a person was a child, who a person is in their 20s, who a person is growing up.”

Executive producer Feig expressed that he loved the ending, as it mimicked what happened in his own life.

“I was kind of having trouble dating and a few things went terrible and I was just like, ‘Forget it. I’m a bachelor, that’s it, I’m done.’ That’s when I met my wife,” Feig said. “So, that’s what I love about that last episode. She’s satisfied in her life, she’s got it going on and she’s just like, ‘I’m fine.’ Then, she opens up and here he comes.”

Portraying that journey authentically often involved the show’s writers and stars alike integrating some of their own relationship mishaps into the mix. In order to do just that, “Love Life” creator and co-showrunner Boyd took a note from Feig.

“I had heard about ‘Freaks and Geeks,’ the show that Paul [Feig] created which is one of my favorites ever, where they had started their writer’s room with a questionnaire that was asking people about their various high school experiences and the answers to those questions ended up generating a lot of stories,” Boyd said. “So, for us, we wanted to have that same approach where we were starting by kind of digging into everyone’s lives and then, as Anna [Kendrick] said, by the time you’re actually shooting it, it all gets so amalgamated and it becomes this big soup of everything.”

Kendrick admitted that many of Darby’s struggles came from her own.

“I’ll just say this, there was a point where there was so much from my life that it made me very nervous,” Kendrick said. “The truth is, the show just changed so much, so often, and so many other people were so willing to give so much of themselves and the specifics of their life. Whether it was joyful of painful or embarrassing, that it all kind of got blended and remixed.”

Not only were the cast and creators’ personal lives woven into the show, but Chao, who plays Darby’s best friend Sara Yang, said that there was a very collaborative feel to the show even once filming had started.

“You guys were talking about how all of our real lives are woven in and it was really nice to be consulted about it,” Chao said. “Sam [Boyd] would come in to my trailer and be like, ‘What do you think about this? Does this ring true? Would she do this?’ It felt like we were all crafting these people together.”

“Love Life” has already been renewed for a second season, but the series will no longer center around Darby. Even though it will focus an entirely different character, Boyd is confident that the show’s heart will remain.

“To me, the real power of this show’s premise lies in our ability to reset from season to season,” Boyd said. “Even more specifically than that, our ability to split the difference between an anthology show and more of a traditional ongoing series so that it still feels like the same show and it really feels like you’re popping over and looking at a different person in this same world. There will be these peripheral connections but it still will feel, I think, totally fresh.”