Dylan Minnette Has an Idea for ’13 Reasons Why’ Season 5 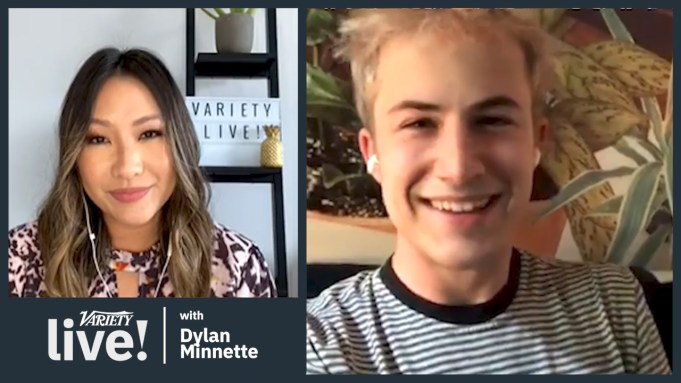 In episode 8 of the fourth season of “13 Reasons Why,” the students of Liberty High engage in a dramatic and violent encounter with members of the on-campus police force, a scene that — amid protests against racism and police brutality that have erupted around the world in recent days — feels oddly familiar.

Of course, it’s not a timeliness that star Dylan Minnette, who plays Clay Jensen, could have anticipated when the Netflix show filmed last year.

“It was definitely a commentary on the same themes, on police brutality and racial discrimination,” says Minnette on “Variety Live!”

Season 4, which premiered earlier in June, ended on a bittersweet, even optimistic note. After grappling with the unexpected death of his adopted brother Justin, Clay drives off to college with his best friend Tony (played by Christian Navarro), a callback to one of the first scenes in Season 1.

“You don’t see Clay fully recovered,” says Minnette of the show’s final episode. “You see him come to terms with what he’s struggling with — being able to say it in front of an entire school at graduation and be able to own it — and have an optimistic outlook on life… but you don’t see him recover.”

His character’s unraveling throughout the season, including struggles with dissociative identity disorder, was exactly the coda he had envisioned, as he “wanted to see Clay hit his lowest of lows.”

“I remember speaking to Brian Yorkey, the showrunner, over the course of the first few seasons, saying that I really want Clay to be in therapy in Season 4 because I want to take a deep dive into what’s actually going on in Clay’s mind,” he recalls. “We’ve seen him have these struggles since the beginning of the show, and I wanted to face that headfirst.”

“13 Reasons Why” has courted controversy throughout its run because of its depictions of teenage suicide and sexual assault, among other issues. Last July, Netflix revised scenes depicting suicide from the show’s first season. Each episode is prefaced by a public service announcement directing viewers to resources for suicide prevention, drug abuse and addiction and school violence, among others.

“I think that there’s no opinion on the series that is wrong. Everyone is entitled to their own opinion, in the way that they perceive it. And I’ve never frowned upon any which way anyone wants to look at [the show],” says Minnette. He adds that it’s the first time he’s been on a series whose legacy in pop culture, in part, will be starting many conversations about the issues modern teenagers struggle with.

And in the age of reboots and reimaginings, Minnette has an idea for a hypothetical Season 5: Clay quarantining in Evergreen County with his parents — and ghost versions of deceased characters Justin, Bryce, Montgomery and Hannah.

“It’s all set in one room,” he jokes. “Damn, actually we should have done this.”

Watch the full interview with Dylan Minnette on “Variety Live!” above.