Why ‘Succession’ Rap ‘L to the OG’ Isn’t in the Hunt for an Emmy, and More on One of the TV Academy’s Weirder Categories (Column) 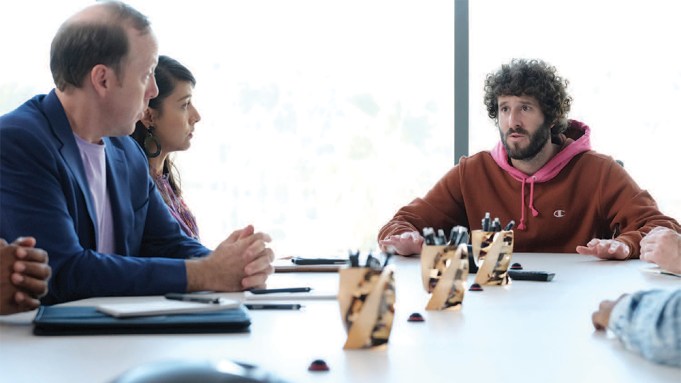 The Emmy nomination ballots are now closed, but in scouring this year’s entries, I was sad to see that “Succession” composer Nicholas Britell didn’t submit the show’s seminal Season 2 rap, “L to the OG.”

Featured in the “Succession” episode “Dundee,” the song was one of the cringiest, most memorable moments of the last TV season: At a black-tie dinner celebrating mega-mogul Logan Roy’s 50th year running Waystar Royco, his son Kendall (Jeremy Strong) — dressed in a baseball jersey, which had been under his tuxedo — stuns the crowd by rapping about his dad’s career. That embarrassing moment solidified for many viewers why they love to hate and hate to love the deliciously dysfunctional family at the heart of “Succession.”

From that moment on, I’ve been looking forward to the Emmys figuring out a way to recruit Strong to re-create that performance on the telecast. Even though it won’t be a contender, perhaps there’s still a way to get our “L to the OG” moment during the ceremony. But more important, why wasn’t it submitted?

Britell, who was in a hip-hop group in college, went back to some beats he created at the time, including one he felt would work for Kendall. After “Succession” creator Jesse Armstrong gave the go-ahead, Will Tracy and Adam McKay wrote the “L to the OG” lyrics and Britell put it all together, with Strong giving his input on the track as well.

But because it was an old beat, Britell closely followed the TV Academy rules, which are very rigid when it comes to whether anything repurposed for a song can be submitted: “No reedited, rearranged, reorchestrated, reimagined, reworked, rerecorded works are allowed.” Alas, “L to the OG” will have to wait for the Grammys, where it can compete in the best song written for visual media category (although TV songs are rarely nominated there, and only one has won: “Boss of Me,” from “Malcolm in the Middle,” in 2002).

“Disqualifications happen less frequently at the Emmys, but they do happen, and I’m sure that Britell was simply being honest and careful about his Emmy submissions,” writer Jon Burlingame, who covers TV and film music for Variety, tells me.

Even without “L to the OG,” the award for outstanding music and lyrics is perhaps my favorite category in the entire Emmy race, perhaps because of how delightfully bonkers it’s become in recent years.

Last year, for example, the winning song was “Antidepressants Are So Not a Big Deal,” from “Crazy Ex-Girlfriend,” lyrics by Rachel Bloom, Jack Dolgen and the late Adam Schlesinger, with music by Bloom and Schlesinger. Among its competition: a song titled “Holiday Party (I Did a Little Cocaine Tonight),” from “Documentary Now!”

Things really took off for the category in 2007, when “Saturday Night Live” song “Dick in a Box” won against entries such as “My Drunken Irish Dad” from “Family Guy” and “Everything Comes Down to Poo” from “Scrubs.”

This year’s submissions in the song category are the usual mix of earnest tracks from important series, sweet songs from kids’ shows … and silly, satirical or just plain sassy songs from the rest. Superstar The Weeknd is in there with a song from a guest spot on “American Dad!,” animated Apple TV Plus musical “Central Park” is submitting three songs (including one from Sara Bareilles) and Disney Plus’ “High School Musical: The Musical” has entered four.

Among other submissions: “Full Frontal With Samantha Bee” has a song about the 2020 Census, “Jimmy Kimmel Live” has one about the “Bagel Boss” of Long Island and “Saturday Night Live” has five songs in contention, including another one from The Weeknd.

And then there’s the unique case of FX’s comedy “Dave,” which ended its season with a storyline in which Dave (Dave Burd, aka Lil Dicky) pitches his new record label on “Jail,” a nine-minute opus that tells the entire story of the rapper being arrested for indecent exposure and being sent to prison, then confronting being behind bars in the most explicit way imaginable. In the episode, the label execs are horrified and stop the song midstream because of its depiction of racial gangs and sexual assault. Dave defies them and takes the number to the “Breakfast Club” radio show to argue it’s actually a comment on the criminal justice system. After being grilled about white appropriation of Black culture, Dave comes to his senses and decides not to share the song.

In real life, even “Jail” has been submitted for an Emmy. Told you: This category is bonkers.