Jimmy Kimmel on Hosting This Year’s Virtual Emmys: ‘Everything Is Different’ 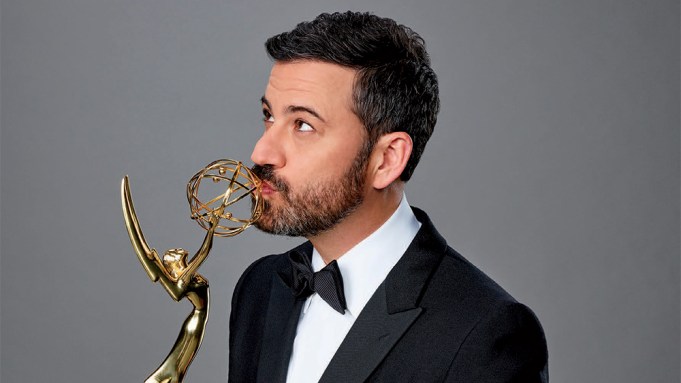 Jimmy Kimmel has been a part of my life since the moment I arrived in Los Angeles in 1996 and started listening to him every morning as Jimmy the Sports Guy on KROQ’s “Kevin & Bean Show.” As a radio geek myself, I’ve always loved that Kimmel started in radio, where it’s live; you must think fast and you have to rely on your instincts since there’s no audience to give you immediate feedback.

In many ways, radio was the perfect training ground for Kimmel as he prepares to host this year’s Emmy telecast — which will be live and with no audience, forcing him to think fast and rely on his instincts.

“I’m fairly comfortable with the idea of not getting a response from an audience,” Kimmel tells me. “Of course, it’s more fun when you do get big laughs for the jokes you work hard on for a couple of months, but what are you gonna do? It’s a pandemic!”

A few weeks ago, I spoke with Emmys executive producers Reggie Hudlin and Ian Stewart for Variety and broke down how this year’s show will go: Kimmel will be on a small stage inside Staples Center, a site chosen to make it easy for the crew to be socially distanced. It’s also necessary to handle the sheer number of camera feeds coming into the production: around 140, if they pull off a plan to send a crew to follow every major nominee.

“They picked the biggest possible venue for the smallest possible show,” Kimmel says. “We’re doing the show from no place to no one. We’re going to be handing out the awards remotely, and I hope that we get to see some excitement from inside the house — people’s families. I hope it’s not the typical ‘Sit in front of your monitor, with a carefully selected assortment of books behind you’ situation. I hope that people’s families are going crazy when they win.”

No matter what happens on Sept. 20, this still won’t be the most bizarre awards hosting experience for Kimmel. That, of course, will forever be the infamous 2017 Oscars, when “La La Land” was accidentally announced as best picture, before everyone realized that “Moonlight” was the true winner.

“That was a dreamlike type thing,” Kimmel says. “Knowing what you’re going into is a big part of how you react to something. And obviously we didn’t know that was gonna happen. This, we know what’s going to happen [at this year’s Emmys]. I mean, we don’t know if our connections are going to hold off but other than that, we know what’s gonna happen. I guess the only thing that would be comparable is if our Wi Fi cuts out and I have to stand there and talk for three hours.”

Kimmel says most of the show is falling into place, and that he expects to have a few celebrities join him at Staples Center, socially distanced, of course. In a year where most major awards shows have been prerecorded, including the recent MTV Video Music Awards, he and the other producers are stressing “live” for the Emmys.

“There’s not going to be a lot of pre-tapes,” he says. “We’ve determined that that’s more trouble than it’s worth. The show will be mostly what we do that night. I think if we try to do what we’ve done in the past, we’re going to fail.”

At the same time, Kimmel is clear that the Emmys will still take its main role seriously: honoring the TV talent who have worked their whole lives to reach this moment of recognition. “I want to make sure that it’s fulfilling and that they feel like they weren’t cheated out of the full Emmy experience,” Kimmel says. “We want to make it as special as it should be. And also, along the way, we’ll make sure to pay tribute to the people who are leading us through this pandemic.”

The Emmys will mark Kimmel’s return to TV after taking the summer off from “Jimmy Kimmel Live,” which has relied on guest hosts in recent months. While on break, Kimmel rented a Winnebago and drove his family to Idaho, stopping at national parks along the way. “I know I should probably say I’m itching to get back to work,” he says. “But the truth is, I’ve enjoyed relaxing.”

“Jimmy Kimmel Live” returns on Sept. 21 — the day after he presents the Emmys — as the fall TV season gets underway. But Kimmel has already been busy, having shot a new season of “Who Wants to Be a Millionaire,” which he hosts, last month.

“It went much better than I thought it was going to go,” Kimmel says of the new “Millionaire” season. “Especially when I showed up, it was like the end of the movie ‘ET.’ Everyone was in hazmat suits. And I was like ‘oh yeah, this is gonna be funny. I don’t know how we’re gonna make this lively and entertaining, everybody’s preparing for death here.’ It actually turned out to be, I think the episodes are gonna be really strong, actually. We just relied on the 15 people who were there working in the room to give us reactions and we had some pretty good shows. So it went pretty well.”

Since then, he’s been in Emmys prep mode. Kimmel had agreed to host and executive produce this year’s Emmys, since it’s on his home network of ABC, long before COVID-19 hit. “I have to say the Emmys are more fun to host,” he says. “It’s not as stuffy an affair and it’s not treated with the same amount of gravity that the Oscars are. And also I just think I know more people in television, and there are more comedians. Ultimately,I like to be around comedians, and then there are more of them on television.”

It’s a switch from last year, when the Emmys drew mostly negative reviews for going sans host. (“This year we kept the host and got rid of the audience,” Kimmel quips.) Now, Kimmel relishes the fact that out of necessity, they’ve been given permission to blow up the usual awards show format.

“We’ve had no choice but to reinvent it,” he says. “I mean, everything is different. I think the key for me is to have fun with the limitations. Make the negatives into positives and these things that we all have to do when we go into work now. … You know, everyone says, ‘These award shows are all the same.’ And this one is definitely not going to be the same.”