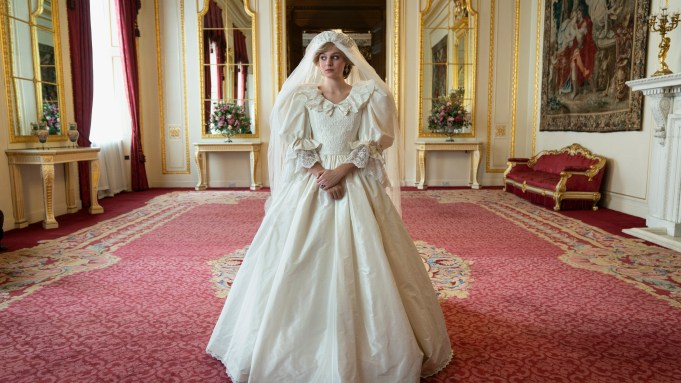 Patient viewers of Netflix’s royal drama “The Crown” are in for a serious pay-off with season 4, which introduces Princess Diana for the first time and delights in the painful tension between the Queen and then-Prime Minister Margaret Thatcher.

“Up until [this] point, we had been in deep history. But I do think this is the first of the modern series,” said creator Peter Morgan during a virtual press conference for the show on Thursday. “It’s so vivid, the memory of the Diana era, and it feels more current and alive.”

Netflix co-CEO Ted Sarandos, who has in the past said the show informs a “global zeitgeist,” excitedly introduced the Thursday press event, which took place days ahead of the season 4 premiere on Nov. 15. The streaming giant previewed two episodes, followed by a pre-recorded Q&A with the cast, Morgan and executive producer Suzanne Mackie, who recently departed “The Crown” producer Left Bank to set up shop on her own, with a Netflix deal in hand. Mackie will continue to work on the final two seasons of the show.

A luscious first episode of season 4 is grounded by the bitter tension between the British government, led by Thatcher, and the IRA (Irish Republican Army), focusing on the 1979 death of Lord Mountbatten, who was killed by a bomb planted by the organization. It is, however, Emma Corrin’s debut as Diana Spencer that is utterly engrossing from the moment she crosses paths — dressed in a “Midsummer Night’s Dream” costume — with Prince Charles in a scene reminiscent of Baz Luhrmann’s “Romeo + Juliet.”

Morgan spoke to the polarizing nature of Diana — who is only 18 when she meets Prince Charles — and her complicated legacy. “[She is] always quite warmly thought of, but nevertheless, there’s an unmistakable feeling that she was as much the agent of her own downfall as she was the victim of others’ cruelty.”

“This moment is so engrained in our culture,” noted Josh O’ Connor, who plays Prince Charles. “Diana was one of the first celebrities in the modern sense, so all of those stories are like folklore. I guess, in that sense, there was a familiarity with it, but beyond that, everything was new to me.”

Corrin highlighted that her and O’Connor were constantly reminding themselves over the course of the season not to “play the ending” to the couple’s relationship, which resulted in divorce in 1996 following a four-year separation.

Helena Bonham Carter, who portrays the Queen’s carefree younger sister Princess Margaret in the show, reflected on how young Diana was at the time, which she only fully appreciated while working on the show. “In my real life, Diana was always so much older to me, so that day she got married, I thought, ‘Oh she’s an adult.’ But it was only then in the read-through when you go, ‘Oh she is so much younger. And she is so innocent. And this is a disaster waiting to happen. And none of them have seen it.’”

Morgan said the timeline for season 4 spans the reign of former Prime Minister Margaret Thatcher from 1979 to 1990. “The writing tends to come quite quickly but the breaking down into episodes to try and address the greatest hits of the period, historically and politically, [is more challenging],” said the writer.

Gillian Anderson, who portrays Thatcher, described the season as depicting a “politically turbulent decade.” “It’s a very interesting portrait of Thatcher’s Britain. Peter’s very cleverly interwoven the political with the private with the family and it’s an interesting relationship between the monarch and the prime minister because they’re both the same age, but also the strength of Margaret Thatcher’s presence presents an interesting dynamic to the Queen.”

Morgan added, “When you’re looking at trying to tell a story about the reign of Margaret Thatcher, it’s precisely the moment where her opinions intersect or pivot to those of the Queen that ultimately become the richest episodes of ‘The Crown.’”

Olivia Colman, who plays the Queen for a second and final season before handing the reins to Imelda Staunton, didn’t mince words about the troubled relationship between the two figureheads. “It was terribly exciting at the beginning. Powerful woman versus powerful woman, with so much in common, but yes, slowly, slowly, they started — in our story, but I think it is true — to absolutely hate each other, which is so much fun to play,” said a gleeful Colman.

Episode two of season four takes place at the Queen’s Balmoral residence in Scotland, where Thatcher is invited for a weekend that gradually becomes deeply uncomfortable for everyone involved.

“[Balmoral] is where we think the Queen is most at home and there was an awful lot of funny stuff with Gillian wearing the wrong clothes in the middle of a field, and [she] almost fell out of a Landrover,” joked Colman. The latter scene, however, unfortunately didn’t make the final cut.

Colman said she found it “more comfortable” returning for another season of the show. “It is a bit more like a family. There is that pleasing, protecting, loving and joking that happens in normal families that we had totally settled into for season 4. It was such a joy to do. It was slightly scary in season 3 and then it was so much fun in season 4.”

Morgan, who struck an overall deal with Netflix late last year, famously backed out of season 6 of “The Crown” in January, with Netflix announcing that the show would end with season 5, only to make an abrupt about-face in July. “As we started to discuss the storylines for series 5, it soon became clear that in order to do justice to the richness and complexity of the story we should go back to the original plan and do six seasons,” said Morgan at the time.

Season 6, which will take the family into the 21st century, isn’t intended to “bring us any closer to present-day — it will simply enable us to cover the same period in greater detail,” said Morgan.