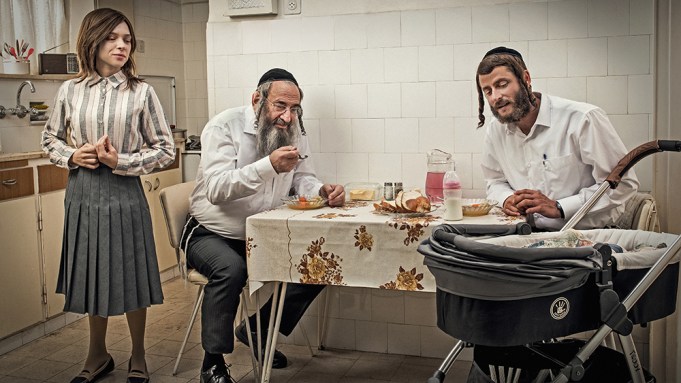 Israel’s Yes Studios (“Fauda”) has unveiled a first look clip and photos of the anticipated third season of its hit Netflix drama “Shtisel,” and has announced two new shows, “The Chef” and “Embezzlement.”

“Shtisel,” whose first two seasons are available on Netflix, follows a Haredi family living in an ultra-Orthodox neighborhood of Jerusalem reckoning with love, loss and the doldrums of daily life.

Created and written by Ori Elon and Yehonatan Indursky, the series stars Michael Aloni, Doval’e Glickman, Neta Riskin, Sasson Gabai and Shira Haas, the star of Netflix’s “Unorthodox” who is nominated for an Emmy Award. “Shtisel” was produced by Abot Hameiri, a Fremantle company, and is directed by Alon Zingman.

The third season of “Shtisel” picks up four years after the events of the previous season. Comprising nine episodes, Season 3 of the show started filming in July under strict COVID-19 protocols, and will be airing on Yes TV in Israel later this year. “Shtisel” producer Dikla Barkai confirmed to Variety that the show successfully completed production in early September, before the country locked down again on Sept. 13. The first clip and images of the upcoming third season were unveiled during a special Yes TV media event on Monday in Israel.

Yes Studios is also launching two new shows, including “Embezzlement,” a seven-part crime drama produced by Movie Plus, the team behind “Our Boys.”

Created by Yotam Gendelman, “Embezzlement” is based on the true story of bank teller Eti Alon, who single-handedly brought down a bank after embezzling more than $100 million in order to cover up her brother’s gambling losses.

“This is the story of a patriarchal family, a woman who sacrificed herself, and the tremendous amounts of money that was used to eventually fund the country’s underworld, resulting in the rise and arming of organized crime,” said Yes Studios.

“The Chef,” meanwhile, follows an unemployed tech worker who starts working in the kitchen of a prestigious restaurant run by a brilliant chef who is struggling to stay relevant.

The show was co-created and co-written by Erez Kavel and Orit Dabush. Kavel is a well-seasoned features screenwriter whose credits include the Sundance-prizewinning “Restoration,” and “Five Hours From Paris.” “The Chef” is produced by Yes Studios and Kastina Communications. Gal Toren (“Sirens”), Guri Alfi Aaron (“A Wonderful Country”), Rotem Sela (“Autonomies”) and Yael Elkana (“The Commune”) star in the series, which is produced by Ayelet Imberman and Meny Aviram.

Both series are completed. “The Chef” is slated to launch in late 2020 and “Embezzlement” in early 2021. “The Chef” has already been selected for the Berlin Series Festival and the Zurich Film Festival.

Yes Studios is a distribution and production company fully owned by Yes TV, a leading pay TV platform in Israel. Yes Studios is the producer and distributor of “Fauda” as well as “Your Honor,” “Charlie Golf One” and “On the Spectrum.”