On Friday, July 22 2011, Anders Behring Breivik, a 32-year-old Norwegian,  drove a white van from Skoyen to the Government quarter in Oslo, where he parked at 3.17 pm. In the van was a 2,100 pound home-made bomb, with a seven-minute fuse, whose explosion killed eight people. He then travelled to the island of Utoya, then hosting a camp of the Labour Party’s teen Workers’ Youth League, where he shot dead 77 campers, mostly teenagers. Some ran, swam or begged for their lives, others played dead.

Produced by Norwegian pubcaster production arm NRK Drama, created by Sara Johnsen and Pål Sletaune, and distributed by the U.K.-based DRG, part of the Nordic Entertainment Group, drama series “22 July” is not to be confused with Paul Greengrass’ Netflix movie. It’s a very different proposition,  recording rather the reactions of its ensemble cast – Aline and Harald, two journalists at Oslo’s Aftenposten newspaper, Norway0s biggest newspaper; Anne Cathrine, a chief anesthetist at an Oslo trauma unit, Eivind, a police officer who scours for dead bodies after the massacre; a teacher, Helga, who transfers to a primary school where one pupil has lost his elder sister at Utøya; and Mads, a blogger who railing against the destruction of Norwegian identity by Muslim immigration, who Breivik – in the series – claims inspired him to act.

A fiction, using composite characters, but including real-life footage, and meticulously based on the findings of a Commission and Aftenposten, “22 July” does not pull its punches as Aline and Harald expose a monumental lack of preparation among Norwegian police: Helicopters at the ready to intervene were told to wait; the first police patrol from Honefoss secured pier, directed traffic, didn’t attempt to confront the killer; the emergency intervention Delta Force sailed to Utøya from the wrong place -Storøya – and its dingy near sank, its occupants being rescued by boats belonging to mainland campers.

Some scenes recorded are near surreal: the streets below the bombed government building rained by papers from offices above. Others are harrowingly devastating, such as forensic evidence of two victims’ deaths read out at Breivik’s trial: “The shot was fired at point-blank range. The projectile fragments into thousands of small fragments in the skull base. She may have moved a slight distance before fainting from the blood loss.”

Equally haunting is the quiet heroism of its composite characters, such as cop Eivand, who refuses to give up on denouncing the real reasons for a young boy’s fatal accident, even though he holds himself partly to blame and has lost his job because of his insistence.

Variety chatted to “22 July’s” head writer Sara Johnsen, best known to date as the writer-director of award-winning feature films – “Kissed by Winter”, “Upperdog,” “All That Matters is Past” – just after “22 July’s” world premiere on NRK on Jan. 5.

This is a story of how people reacted to the massacre rather than an analysis of its origins. But it is bookended by a story of a little boy who falls from scaffolding under suspicious circumstances. That would seem key when you suggest not only how people reacted to the massacre but also how they attempted to explain it: the crucial link between parents and young children and violence. Could you comment?

The boy’s fall is both a story about a system that fails to protect children and how the police, forced to save money and please the system, sometimes fail badly in these matters. Really badly!

Its also part of  the story reflecting the terrorist’s childhood. His childhood does not explain his actions, but it’s an important and maybe under-communicated part of the whole tragedy. It’s one perspective that we felt also had to be part of the series.

Why choose representatives of the professions – policeman, doctor, teacher, journalist – as of of the five main characters?

Pål Sletaune and I  got this idea in 2013. We were both very impacted and thought, talked and read a lot about July 22, but we did not know how to approach it in a meaningful way. Then we got the perspective from watching “Treme” and also thinking about “The Wire.” We had read articles about doctors and policemen that worked that day. and we felt these people’s experiences could tell us something about Norway and the systems we have. We went to NRK and in 2014 we got backing to start researching more and interview people. We also had two journalists to help us. The professions we portray are all involved in July 22 and they had to face difficulties during that day and the times to come. We feel that by making drama out of their experiences, we say something important about consequences- mainly from the terror attack- but also from actions/ non-actions made by people working in a system. 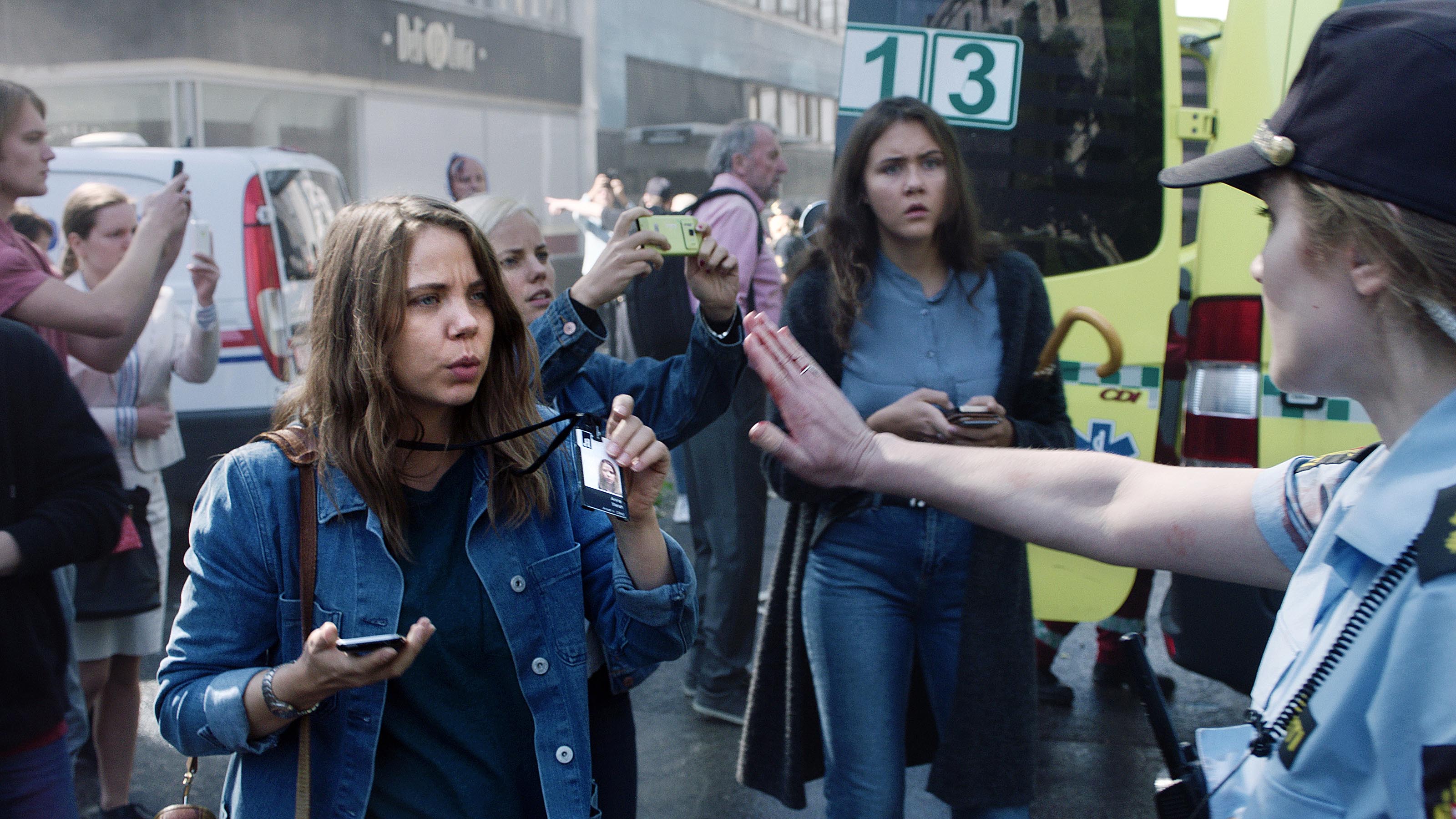 Journalist Aline’s assertions about the slow police reaction point up a larger point, perhaps: the police were hugely understaffed, Northern Buskerud manned by just one person. Ulleval Hospital’s trauma unit is similarly threatened with cost cuts as the series begins…Again, could you comment?

When we started working, we learned about how New Public Management thinking played out through all our systems. All the doctors we interviewed were angry and sad about how the hospital was run in 2011  ( and now!). The policemen felt the same, they had as an example for years asked to be two at the central in NBP. All this is described in the very critical Gjørv report that goes through how the systems worked and also failed under July 22.

We also learned about how false the language of this”effective and economical” thinking is and how far from the real world the models they make feel. We talked to people who explained how a model to save money in a car factory is also used to tell politicians how they can save money in hospitals.

The hospital managed to work very well to handle the consequences of the attack, but this was mainly because the doctors took so much responsibility and had a lot of training.

A policeman needs good orders and on the day of July 22 the police system failed. There are many reasons but we feel that to understand it one has to look at the way the police is organized and at the ideology. There was too much top management with people at the top that did not know the real work. Again this is NPM thinking: A boss is a boss, does not matter where and what he works with.

How did you approach the writing of a series which, though fiction in the story lines of its composite characters, has – vitally – to reflect real events which resonate with audiences?

First we talked to people and got their experiences. Out of the experiences we made characters. We used the event- every truthful bit – as plot: It has a natural time line. There was a lot of material. In the end, we had to ask: What makes the greatest impression on us will also be the strongest and most important thing to tell?

”22 July” avoids showing any part of the massacre, though you hear it, listen to the devastating court record of the cause of death of two victims. Was this simply because you wanted to focus on another subject?

Yes, as I said, we think one can tell a lot about the horror of the action by showing details and people working, We didn’t want to show the actually shooting, to cast actors that would represent real victims, in 2013 that felt very very wrong.

How far, as head writer and co-creator with director Pål Sletaune, were you able to restructure the series in editing, if that was necessary?

We edited this series for one and a half years and Pål and his crew shot a lot of material, so the time came in handy.

I dedicated a long time to writing the first episode, we had so many drafts and we took a long time to editing it- and reconstructing. Mostly the story of the boy falling was reconstructed and put in Episode One and out of Episode Two.

I’d claim that our editor Zaklina Stojcevska is one the best editors in Europe and we all worked really well together,

And did you give Pål guidelines on direction? If so, what were they?

Pål and I really made this series all together, we had the idea and wrote together from the start and shared the same vision. It made everything easier in the writer-director relation that we had such a long time to work and discuss.

Both of us  wrote, cast, thought, edited, worked on sound and directed. Still we sat up every night after shooting days and talked about the scenes. We also had a lot of really talented people in the crew and most of all our co- director Gjylieta Berisha who was also part of pre-production and in our idea group.

But Pål Sletaune found the visual style, and one has maybe to be a director to know how hard it it to resemble reality. I think he did a great job. He also had to be the hard man and argue when producers wanted to save money. This is the job I hate the most.