Continue to Variety SKIP AD
You will be redirected back to your article in seconds
Nov 23, 2020 6:31am PT 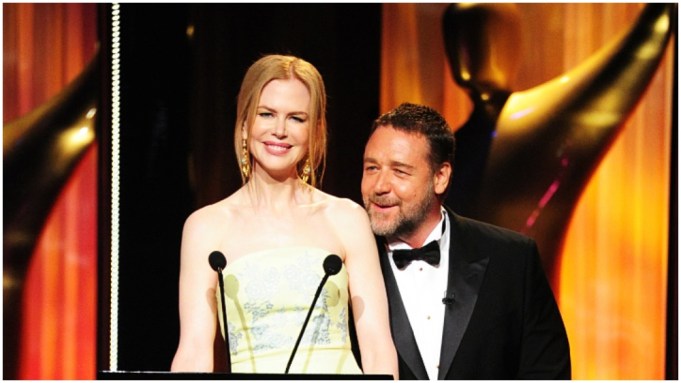 The Australian Academy of Cinema and Television (AACTA) has announced that two of the country’s most recognizable on-screen performers, Russell Crowe and Nicole Kidman, will assume the roles of Academy president and vice president respectively.

Crowe’s Australian work includes “The Water Diviner,” his directorial debut for which he received five AACTA Awards, and performances in “Boy Erased” and “True History of The Kelly Gang.” For her part, Kidman’s domestic work takes in performances in “Top of The Lake,” “Lion” and “Boy Erased,” each earning her AACTA Awards. She is also currently filming an adaptation of Liane Moriarty’s novel “Nine Perfect Strangers.”

“The support of Russell Crowe and Nicole Kidman has been integral to AACTA’s growth over the last decade, helping us to achieve record industry and audience growth and engagement in Australia and internationally,” said AACTA CEO Damian Trewhella.

“It’s an incredible honor to be asked to serve as AACTA President,” said Crowe. “I want to refocus our politicians, of all persuasions, on the power and reach of our local screen industry. I’ll be working on encouraging the government to give Australian producers the fiscal tools they need to be globally competitive, while simultaneously fostering local talent and magnetizing the industry to attract international productions.”

“I’ve always been so proud of the Australian screen industry and what it continues to achieve globally. I’m looking forward to playing a role in setting a tone and a platform for future success,” Kidman added.

ITV Studios and Japan’s Nippon TV have agreed a new co-development deal that will see the companies work together to create a new international format for the global marketplace.

Several existing and to-be-developed ideas will be considered before deciding which will be taken to market and eventually produced in the U.K. and Japan. Nippon TV will then handle distribution across Asia and ITV the rest of the world.

Earlier this year, the two brands announced that ITV had acquired international production rights for Nippon’s popular gameshow format “Red Carpet Survival” an all territories where it has an unscripted production base.

A 30-year veteran of the force, Sutton was involved in 37 murder investigations with 35 leading to convictions, an exceptional rate. The series will revisit several of the most high-profile cases from Sutton’s career. He is also the inspiration for Martin Clunes’ character on the ITV drama “Manhunt,” recently commissioned for a second season.

“The Real Manhunter” is the first commission of an exclusive agreement between Revelation Films with Sutton for all non-scripted projects. Revelation’s Tony Carne produces and Trevor Drane directs.

The company develops IP and projects from Gerry Anderson’s personal archive and manages his estate and existing works, which include classic brands such as “Thunderbirds,” “Captain Scarlet,” “UFO” and “Space: 1999,” as well as new properties developed internally for a range of platforms.

The deal with ITV Studios will see Anderson expand on its range of products, responding to a growing market demand for updated content from the company’s classic catalog, including physical media and merchandising. The Official Gerry Anderson Store’s sales figures are on course to more than double what they did in 2019.

Nuria Giménez Lorang’s Spanish feature “My Mexican Bretzel” was the big winner at the 69th International Film Festival Mannheim-Heidelberg, scoring the €25,000 ($29,756) International Newcomer and Fipresci Awards at an award ceremony streamed on the festival’s website on over the weekend. American filmmaker Sabrina Doyle’s “Lorelei” was this year’s Audience Award winner, and also scooped the Student Jury Award.