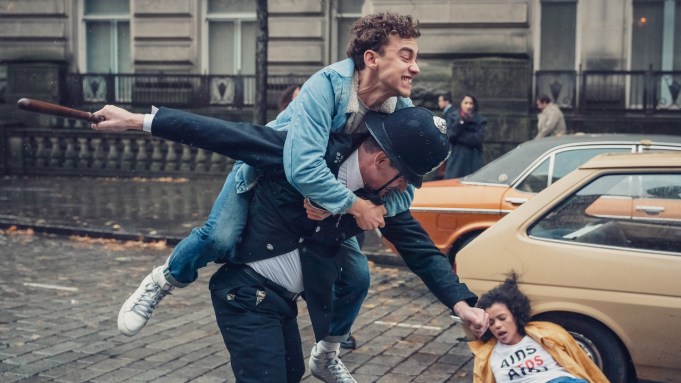 Channel 4 in the U.K. has dropped a first-look teaser and still image for Russell T Davies’ highly anticipated upcoming series “It’s a Sin.”

Starting at the beginning of the decade, “It’s a Sin” follows Ritchie, Roscoe and Colin, three new arrivals to London looking to start a new life. The series follows the three fast friends through the decade as they mature together with the AIDS pandemic looming in the background.

Alexander will play Ritchie, his family’s favorite child who keeps his sexuality closeted from his parents, Douglas plays party boy Roscoe and Scott Howells plays Colin, the quiet one of the three, about to become an apprentice on Savile Row.

“I lived through those times, and it’s taken me decades to build up to this,” says Davies. “And as time marches on, there’s a danger the story will be forgotten. So it’s an honor to write this for the ones we lost, and the ones who survived.”

The series is produced by RED Production Company, a StudioCanal company, and executive produced by Nicola Shindler (“Years and Years”) and Davies, with Peter Hoar (“Umbrella Academy”) directing.

Norwegian filmmaker Øystein Karlsen (“Exit,” “Lilyhammer”) will adapt the new six-hour series, starring “After Life” alum Kerry Godliman as the series’ main character Pearl Nolan, the chef-owner of the Whitstable Pearl restaurant, which she runs with her son, Charlie. A multitasker, she also heads a newly formed detective agency where she employs long-dormant skills picked up during formal police-training years before.

Cineflix Rights is lined up to handle international distribution, with the series premiering exclusively on Acorn TV in North America, New Zealand, Australia and the U.K. Production is set to begin Oct. 26 in Whitstable.

Norwegian animated feature “Two Buddies and a Badger 2 – The Great Big Beast” has posted the best weekend take of any film this year, pre- or post-COVID.

More than half of Norwegian cinemagoers last weekend picked “Two Buddies” as their film of choice, resulting in 43,408 admissions from just 176 screens and limited seating, according to the Nordisk Film & TV Fond. This year’s pre-COVID blockbuster release, “1917,” sold 38,457 admissions in January, while “Tenet” managed just 32,955.

Perhaps more impressive, “Two Buddies” surpassed the opening weekend take of the franchise’s first film, which pulled in 41,603 admissions in September 2015. According to Filmweb.no, Norwegian cinemas had three times the seating capacity of today under COVID-19 regulations.

“Two Buddies and a Badger 2” is co-directed by Rune Spaans and Gunhild Enger and produced by Tordenfilm in association with Qvisten Animation. Sola Media sells internationally.

Jackson Wild, formerly the Jackson Hole Wildlife Film Festival, announced its winners this week, with Netflix Original “My Octopus Teacher,” from Sea Change Project and ZDFE’s Off the Fence, taking a festival-best four prizes, including the Grand Teton Award for the event’s best film.

The awards are billed as a celebration to excellence and innovation in nature, science and conservation storytelling. More than 30 awards were announced at a streaming awards ceremony, a result of COVID-19 forcing the event online for its first ever Jackson Wild Virtual Summit.

“The Octopus in My House,” (Passion Planet)

“The Edge of All We Know” (Collapsar films)

“H2O The Molecule That Made Us,” (WGBH, Passion Pictures)

David Allen, Anna Fitch, (“The Octopus in My House”)

“Corona – The Pandemic and the Pangolin,” (Terra Mater Factual Studios)