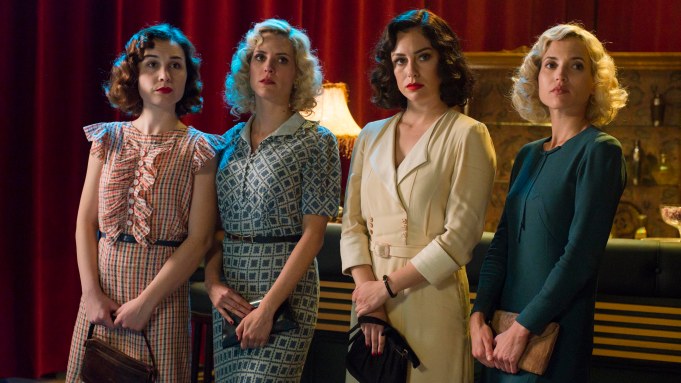 “Cable Girls” (“Chicas del Cable”) Netflix’s first Spanish Original series, will premiere its fifth and final season on Feb. 14. At a press event on Thursday, the platform shared the trailer for the upcoming season while previewing the coming year.

When “Cable Girls,” premiered on April 28, 2017, it fit snugly into a industrial model – think “Velvet” – which had allowed producer Bambu Producciones to conquer Latin America with its original series rather than reversions or titles dubbed into a neutral Spanish: A female-led period drama exploring social and political themes still relevant today starring a cast of familiar Spanish actors. Following a group of young women working for a Spanish telecommunications company, “Cable Girls” focused on the problems facing women the rapidly changing world of pre-Civil War Spain.

The Final Season, however, obviously raises the ante. Set during the thick of the Spanish Civil War, it starts with the tragic death of Ángeles still looming over the group of friends. Meanwhile, Carlota and Oscar have fled Madrid after Carlota was framed for a political assassination, and Lidia (Blanca Suárez) – formerly Alba – is in America with her childhood sweetheart Francisco. In the trailer, we see Lidia’s return after seven years abroad, and her unshakable resolve to bring Ángeles’ daughter Sofia back from the war front, the main plot point which will drive the rest of the season’s drama.

The Platino Awards and Ibero-American Audiovisual Conference have announced the addition of a market to this year’s proceedings, running May 1-3 at the Barceló Maya Arena Convention Center in Riviera Maya, Mexico. Created with the intent of strengthening the Ibero-American audiovisual industry sector and its relationship with tourism and education, the three-day event will run within the framework of the 7th Platino Xcaret Awards and provide meeting space for all participants in the sector as well as an Unwto Affiliate Members Conference focusing on AV tourism. The market is the result of a collaboration between Egeda, Fipca, the government of Quintana Roo, the World Tourism Organization, Barceló Group and other tour operators in the region with the support of Canacine (the National Chamber of the Film Industry of Mexico). Focusing on movies and series from Latin America, Spain and Portugal, the Platino Awards host more than 2,500 industry professionals including more than 1,000 producers, distributors and exhibitors, as well as government support agencies and more than 300 accredited journalists.

Viacom Intl. Studios (VIS) and Diagonal TV, the fiction wing of Endemol Shine Iberia, have announced the joint development of a new series, “The Gypsy Bride,” adapting mystery author Carmen Mola’s popular novel of the same name. The book has sold more than 100,000 copies in seven countries since publishing in 2018. In the series, Susana Macaya, a young woman with a Romani father, disappears after her bachelorette party and is later found dead, suffering the same grizzly fate as her sister Lara seven years before her. The case falls into the hands of Elena Blanco, a veteran homicide detective with a dark past, who’s obsessed with her work and resolving her own history while leaning on alcohol, sex and music to cope.

Canadian broadcaster CTV announced a new half-hour comedy series from “Letterkenny” producers New Metric Media titled “Children Ruin Everything.” The new series is executive produced by creator Kurt Smeaton (“Schitt’s Creek”), Chuck Tatham (“Modern Family”) and Mark Montefiore (“Bad Blood”) and focuses on one couple’s struggle to hold on to bits of their pre-children life, and their inevitable failure to do so, thwarted by their brood. The series began development in 2016 and will begin production in spring 2020 in and around the Toronto area. International distribution will be handled by Bell Media with New Metric Media in charge of international sales.