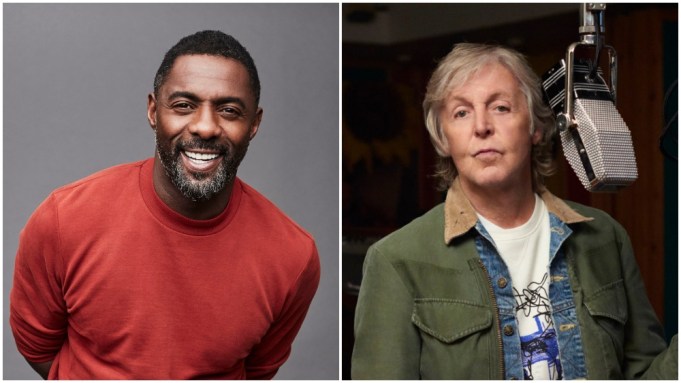 Two British legends are joining forces for a BBC special this December.

Idris Elba will sit down with Paul McCartney for a BBC One and BBC Music special that will join the broadcaster’s holiday schedule. The 60-minute program, which will be recorded in London in the coming weeks, will see Elba interview McCartney about his career as one of the most successful musicians and composers in pop music history.

Produced by SO Television, the show will span the former Beatle’s journey up to the present day, as he continues to produce solo material and collaborations. The artist will soon release his 26th post-Beatles album, “McCartney III,” the third album in a trilogy of classics featuring McCartney playing every instrument and writing and recording every song. The singer launched his solo career in 1970.

BBC One is also set to broadcast McCartney’s 2018 Cavern Club performance. The original Cavern Club in Liverpool was where The Beatles played nearly 300 times between 1961-1963. Over 50 years later, in July 2018, McCartney played a secret gig at the legendary venue, performing a 28-song set to 250 audience members.

Elba said of the special, “When I was asked if I wanted to speak to Paul McCartney, after I realized it wasn’t a joke, I immediately said yes — who wouldn’t?! I am a massive fan of Paul’s! His work has inspired and driven me as a musician, and once I get through the shock of sharing the stage with him, I’m excited to talk about his music and craft. What an honour! Looking forward to sitting with you Paul.”

McCartney said he was “looking forward to sitting down to a chat with the mighty Idris!”

Elba, the Golden Globe and Emmy-nominated star of “Concrete Cowboy,” “Suicide Squad” and “The Harder They Fall,” recently received the BAFTA Special Award in recognition of his career and commitment to championing diversity and new talent in the industry. Elba, who has long courted rumors about being next up to play iconic spy James Bond, is best known to BBC One viewers as DCI John Luther in “Luther,” the BBC crime drama which debuted in 2010.

Elba is also a rapper and launched the record label 7Wallace Music in 2018.

Kate Phillips, acting controller of BBC One, said, “Paul McCartney has undoubtedly created some of the U.K.’s best loved songs, songs which are known throughout the world, so I’m thrilled that he’ll lift the lid on how he continues to create lyrics and music that will forever stand the test of time.

“The must-see combination of Paul in conversation with one of our best loved actors and super fan, Idris Elba, as well as an incredible live performance from the Cavern, are the perfect Christmas presents for BBC audiences,” continued Phillips.

“Idris Elba meets Paul McCartney” was ordered by Charlotte Moore, chief content officer at the BBC. It was commissioned for BBC One and BBC Music by Jan Younghusband, head of TV commissioning, and Phillips. Executive producers are Graham Stuart, Andy Rowe and Dylan Jones.

Meanwhile, “Paul McCartney Live at The Cavern Club” is a Done and Dusted/MPL Communications production. The producers were Scott Rodger for MPL and Simon Fisher for Done + Dusted. The director was Paul Dugdale.