Offering a snapshot of the new realities in Latin America’s Pay TV market, Buenos Aires-based data and marketing research firm Business Bureau (BB) has published a map of both the Pay TV and OTT landscape in Latin America for the first time.

“We have been posting the map of Pay TV statistics in the region since 2012 but it’s the first time we have incorporated the OTT market in it,” said BB Chief Executive Officer Tomas Gennari, who has observed the exponential growth of Pay TV in the region for the past 10 years.

“It accelerated in 2018 but seems to have plateaued last year,” he noted, as more consumers, especially the younger demographic, migrate to Over-the-Top (OTT) streaming services.

As a result, “the big PayTV players have been reinventing themselves, launching their own OTTs and becoming super content aggregators in the process,” he added.

“We are focused on providing entertainment to all consumers when and where they want,” said Michael Bowling, President of DIRECTV Latin America, the leading Pay TV company in the region. “Technology and consumer demands are changing consumption of content across media, making this a very exciting time for our industry,” he noted.

“As a standalone OTT product, DIRECTV GO was launched in Colombia and Chile in 2018 and has since expanded to Peru, Ecuador and Uruguay,” said Bowling. As a TV Everywhere product, DIRECTV GO is available to its prepaid and postpaid customers in Argentina, Chile, Colombia, Ecuador, Peru and Uruguay at no additional charge, he added.

However, Pan-regional Pay TV penetration stands at 51%, with further growth stymied by the slow development of broadband infrastructure, at times exacerbated by social, political or economic factors.

The paucity of credit card use in the region has posed a problem for streaming services, led by Netflix, which entered the market in 2011 and has 29.4 million subscribers to date, according to its report to the Securities and Exchange Commission (SEC) in December.

Bloomberg estimates that the total number of Netflix subscribers in Latin America equals a third of the population with broadband access in the region.

“Challenges with connectivity and payment platforms have largely been overcome in recent years,” said Bowling. “On the connectivity front, we are seeing people are finding more ways to connect, and on the payment front, we are innovators in pre-paid which is helping us overcome those challenges,” he added.

Unsurprisingly, pan-regional households combining both PayTV and OTTs (now at 25%) continue to grow, per Gennari.

Each country in Latin America poses its own set of challenges. For instance, broadband penetration (43%) in Brazil, despite being the largest country in the region, has barely expanded in past years mostly due to the topography of the country, which is dominated by mountains and the Amazon jungle. Satellite TV has been the only way to reach many viewers in Brazil, said Gennari, who also points out that a well-entrenched and robust free-to-air television market has also provided stiff competition to Pay TV.

“The Brazilian government has been pushing to expand fixed broadband internet infrastructure in rural areas, so this will contribute to growth,” Gennari asserted. “Brazil and Mexico are the growth drivers in the region.”

Gennari forecasts a 49% penetration of OTTs in the region by 2024 but sees stagnant growth unless broadband infrastructure expands.

To break past this ceiling, Latin America may adapt India’s solution where mobile broadband penetration has spiked over the past few years, driven by a fast-growing mobile subscriber base and the expanding adoption of 4G LTE services and eventually, 5G services.

Last July, Netflix launched a lower-priced plan of only $2.80 a month in India, but restricted to a single mobile device with standard 480p streams. It has signaled that it may offer a similar service in select territories. 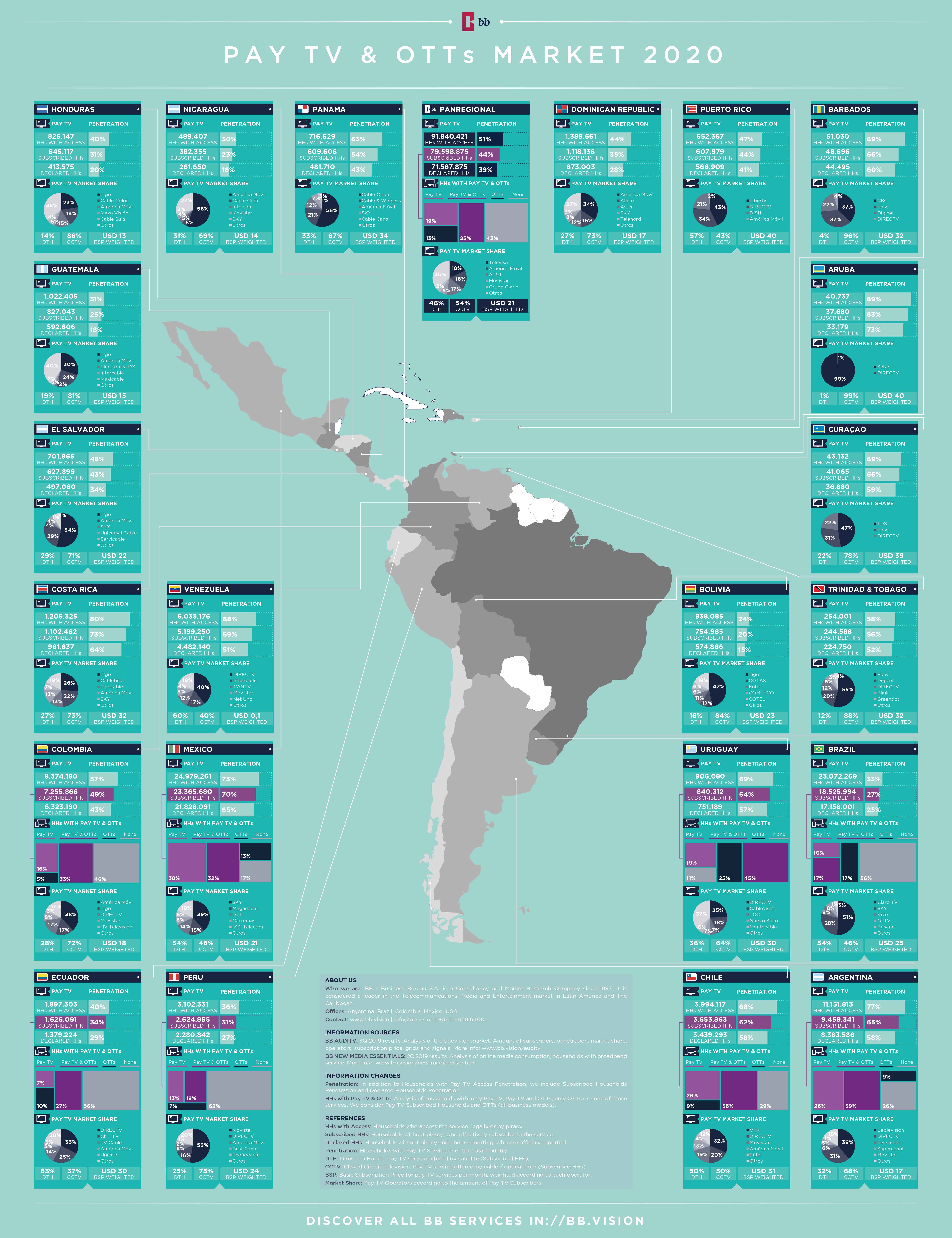