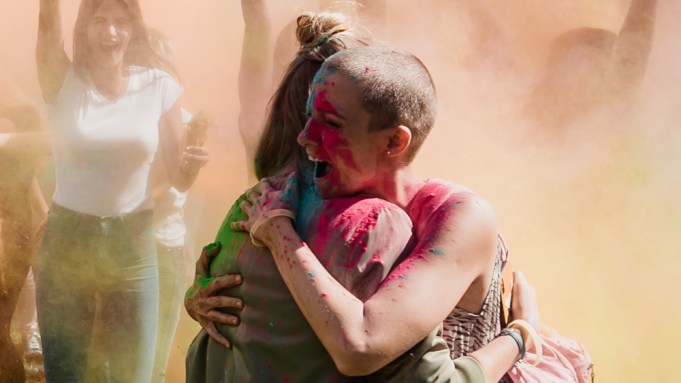 Russian comedy-drama series “257 Reasons to Live,” which will play in competition at Canneseries, follows cancer patient Zhenya after she unexpectedly goes into remission and receives the all-clear.

Unable to believe her luck, Zhenya (played by Polina Maximova) is determined not to waste a minute of her life. She comes across an old notebook she started when she was first diagnosed, containing a bucket list of 257 things she would like to do before she dies. So she sets out to complete the list.

Alexey Lyapichev, the creative producer and lead writer on “257 Reasons to Live,” talks to Variety about the series, which is directed by Maksim Sveshnikov, produced by Yellow, Black and White, Start and Super Production, and sold worldwide by Beta Film.

What was the inspiration for the story?
Cancer is the 21st century disease. It has affected lots of families and people all over the world. I guess more than 50 % of all people working on this project have had some personal experience of cancer. While preparing for this series I heard many stories about it. And usually they were very sad. So we decided to touch on the most optimistic part of it – the remission, when the afflicted person realizes that life has given him or her another chance. So to those who are still struggling with this disease our message was: “You can fight it, you can beat it, everything can be better!” I hope that we have managed to make the series as positive, inspirational and uplifting as we intended.

How would you describe the tone of the series? It reminded me of “Fleabag.”
To tell you the truth, when we shot the pilot, we did not know anything about “Fleabag.” But when I saw the first season of “Fleabag,” it reminded me of “257 Reasons to Live,” but only technically. The story is different and so are the characters.

Our main character is more naive, more of an old-school person – she has an old-fashioned point of view. She always expects to find justice, kindness… all the good things. But usually she faces the opposite. She sees the very cold and cruel world, but keeps going, and tries not to give up, even when she is being challenged and has to experience the worst.

The men in the series are not portrayed in a good light. Was it a conscious decision to see life from a woman’s perspective? What does that add to the drama?
We did not have a specific goal to show men in this way, and I hope if you watch the season until the end, you will also find a positive depiction of men in our series.

Showing this story from a woman’s point of view was a conscious decision – with great respect to all women. It is very difficult to face cancer and to fight this disease, and it is even harder to win this battle, so it deserves great respect when a woman does it all on her own and finds strength to continue fighting.

What is the target demographic group for the series?
I hope it will be of interest to different groups and types of people. As for cancer, it does not choose its victims by their age. So we hope it will give faith, strength and hope to all the people who face this illness. And I think that it could also be interesting for those who don’t have any personal experience of cancer. Because it shows how strong you can become facing all the bad things and misfortune in your life.

What notes did you give Polina Maximova to guide her in her performance as Zhenya?
The best thing that happened to all of us is Polina. In real life, she acts exactly like Zhenya, her character. While she was reading the script, she laughed at the fact that all this could have happened in her real life, too. Because some of the storylines in our series looked exactly like the events that had happened to her. That is why we did not have to give her special notes about anything. Polina is a very kind and naive person, and like her character, she usually gets in some awkward situations. Probably the only guidance we gave her was to deliver a performance that wasn’t too comedic, which could be too eccentric for the dramedy genre.

How would you describe Zhenya’s transformation from episode one to episode two and on through the series?
Zhenya realizes that her thoughts (“I’ll beat cancer and life will be wonderful again”) are not realistic. Because life has white and black stripes, and some things are not positive at all. Through the story she learns that even when you beat one problem it does not necessarily bring everything back to order. Most likely, you will have to solve another problem. So do not relax, take life as it is and fight, if needed. Because this is how it works.

What type of roles is Polina Maximova well-known for in Russia?
Polina is well-known as a comedy actress. She used to act in different sitcoms and comedy series. I guess this is her first role that requires both deep drama and comedy performance at the same time.

Does the series portray a view of Russian society that hasn’t been seen often in the West?
In our series, there are no specific aspects of life in Russia that Western society is unfamiliar with. Even though the Russians might have their own mentality and look at some things differently, they appreciate the same things and the same values: love, kindness, happiness, truth, friendship. I think our series deals with topics that are relevant to all the people across the world.

Can you tell me about the other projects “Yellow, Black and White” is working on?
Yellow, Black and White are Russia’s leading studio and are well known in the West too, producing versatile content for all age groups and across all genres. For instance, this year, besides “257 Reasons to Live,” they are also delivering the new female action drama “Hope”; the psychological thriller “A Good Man,” with a special member of cast from “The Young Pope”; and the outstanding vampire dramedy “Midland Vampires,” among others.