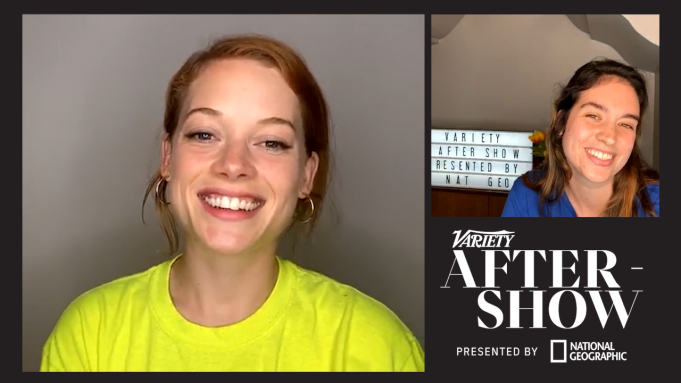 Don’t be fooled by the song and dance, “Zoey’s Extraordinary Playlist” is not for the weak of heart.

Even though some viewers may have seen Mitch’s (Peter Gallagher) death coming, there was no way to emotionally prepare  for the season finale of NBC’s musical dramedy. Jane Levy, who portrays the titular Zoey, wasn’t even safe.

“I put on make-up and I watched the show and I’ve already seen the finale and am freakin’ in it but I cried and then I cried again,” she said in an interview with Variety.

You don’t have a musical background. What were your original thoughts about this project?

I don’t even know about musicals and I’ve never really at all investigated the world of musicals. So I’m in this funny position as the lead of this show and I am the rookie. And I’m working with all these extremely experienced and knowledgeable musical theater actors and fans and writers. It’s just a brand new thing for me. The most fun thing about making television and movies is that it is such a collaborative art in that you never really know. The script is obviously the skeleton and the base and extremely important but you never really know what it’s going to become because there’s so many people contributing. So when I read the script, I just had no idea that I would come to care about the show as much as I do.

Walk us through your rehearsal process.

I didn’t have much rehearsal because I’m in practically every scene in the show and every single musical number because it’s seen through my character’s eyes. When it’s another character performing, I am “learning” my number on the day, but it’s usually me walking around these incredibly talented and practiced scene partners. Mandy Moore, our choreographer, is amazing. It varied from number to number, but I would say that on average each actor would have two rehearsals per number maybe like two hours each. Some were much more. I don’t sing and dance except for beginning of Episode 2, end of Episode 8 and then some of the finale. For [Episode] 8, when I was performing every single number, we took three days off of production so I could learn all of that.

Short! [Laughs] It’s not much, because it was like three days. Mandy is an extremely generous and collaborative artist wherein she really creates to our specific “instruments,” like our bodies. She wants to know a lot about what we think. So the first day of the those three days was conversations. “What is this number for Zoey?” It was an interesting thing too because these are “heart songs” so it’s your deepest, hidden, innermost longings, desires. … Zoey’s a very neurotic character, she’s always hiding how she actually feels so to actually explore deeply what Zoey may feel sexually or her deepest fear. To be able to be unguarded, present that as a musical number was really exciting for me and for the rest of the team.

So the finale — when did you find out that Zoey’s father going to die?

I knew that from the pilot. Austin [Winsberg] had always structured the season with the end of losing Mitch. Our creator’s father had PSP, progressive nuclear palsy, the degenerative disease that’s represented in our show, and I think that this story came from a fantasy of wondering what his dad was thinking in the final months of his life. Expression through song and dance is sort of like our most grand and so this idea came from wanting to be able to communicate with his dad and wanting to know what was going on with him. So I knew from when we shot the pilot that he was going to die.

I feel like it wasn’t surprising for me as a viewer, but even going into it with this arc, it still caught me so off guard. What was shooting that on set like?

Just to live and to love, we lose people and it’s like the hardest truth of our reality and our existence as human beings. We don’t live forever. We all can relate to grief and loss and we will all experience that at some point in our life. So yeah, it was a very emotional ending, one, because we were all saying goodbye to each other so it’s already in the air, and then two, because we all associate with our own experience. When we watch something or are around something we are reminded of our mortality and the people around us’ mortality and the people that we love and we’ve lost and that we’re scared of losing.

One hundred percent. I grew up watching “The O.C.” and I thought he was our universal dad, for sure. He is so paternal, generous, funny. He doesn’t take everything so seriously. He’s been doing this for so many years and he’s just incredibly moving. He’s a great actor and he affected me so much when we worked together. He’s just so available in this way that is like not cheesy. It just feels authentic. Having him play my dad, I can’t imagine doing this with anyone else. I actually remember — this is probably a bad thing to share — but I remember reading the script and being like, “Imagine some man you don’t know singing ‘True Colors’ to you.” I was like, “I don’t think I can handle that. I’m cringing already.”

How do you and Zoey feel on the ending of “Team Max” versus “Team Simon”?

I have a couple things to say. One, I think “Jealous” was so good and also so hot. I was like, “Simon’s hot! Simon’s so hot! Simon is so hot!” Zoey feels that way. Jane feels that way. But he’s messed up, he’s confused. But he’s hot, so in short term you’re like, “OK, Simon’s really hot but in the long term, Max is just like so sweet and just like funny and he’s got it all.” Zoey doesn’t have to choose right now. She just lost her father.

I will say that both musical numbers, John Clarence Stewart was amazing, Skyler doing John Legend does all sorts of things at once. He’s romantic, he’s sweet, he’s funny, he’s awkward, he’s sexy.

Who would Zoey choose to quarantine with in a pandemic, Simon or Max?

Well, Zoey makes a lot of mistakes so I don’t know who is the right choice for her. I mean we all know who the right one is…