Zendaya Talks to MJ Rodriguez About ‘Euphoria,’ ‘Pose’ and Learning Her Own Worth 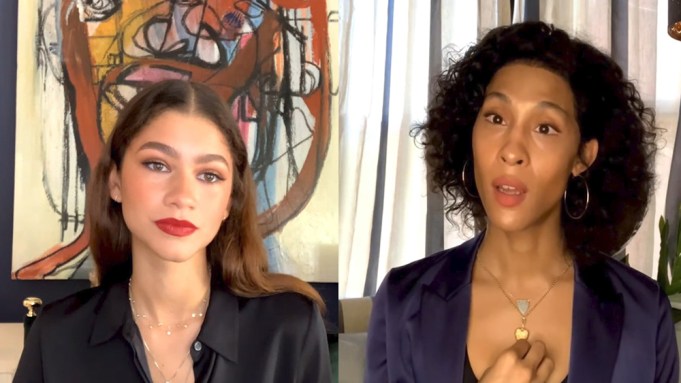 On “Euphoria,” Zendaya plays Rue, an introverted teenager who numbs the pain of high school by turning to drugs. It’s a performance whose emotional power comes from a razor-thin closeness to the truth. Every bit as raw and real is MJ Rodriguez’s powerful turn on “Pose” as Blanca, the den mother of a group of orphan performers in the drama about transgender women in New York. They talked to each other over video chat for Variety‘s Actors on Actors issue.

MJ Rodriguez: Ms. Zendaya, as you may know, I am an extreme fan of “Euphoria.” I love your work. I think you are an amazing actress and so versatile. What was it like finding Rue?

Zendaya: Rue is obviously very different from me, but there’s something that feels like home. Something that feels very stepping into shoes that you somehow already have worn before. I just felt like I was falling into her a lot. I’m sure you can relate, but that feeling of when a character feels like they’re your sister or your best friend. I care about Rue as if she’s someone in my life. And I just want her to be OK.

I’m a huge fan of “Pose,” by the way. I think you are also brilliant. I was watching the first season when I was in London doing “Spider-Man,” and it got me through, because I had so much downtime by myself. How did it come about?

Rodriguez: That means a lot coming from you. To how “Pose” came into my life, it was fast-paced. At first, I heard it from a couple of my girlfriends. And then I remember just jumping straight in. It was the most beautiful moment of my life going through that process of auditioning for a television show, because I had never done that before.

I knew I had the ability to do it. And then everything sprawled out and Blanca came to life. Ryan Murphy was in the room for the second testing, and he brought Dominique [Jackson], and it was instant chemistry between us. I had already done the work on how I would contribute to her character, how I would make sure that she was the compassionate, caring, loving woman, but also bring pieces of my mother and pieces of me and pieces of a lot of trans women who are around me.

Zendaya: Did you become close with these people on set? Did you almost become this mother-like figure outside of this character?

Rodriguez: When we first started, I had worked on a movie and I had known Indya Moore for about two years prior to “Pose.” Billy Porter was associate director on the Off Broadway production of this show that I was doing, “Rent.” Ryan Jamaal Swain and Angel Bismark and Jason [A. Rodriguez], all of these amazing individuals. We just built upon how Mj felt a mother is supposed to be.

There are a lot of topics of discussion in “Euphoria” around trans identity and how one moves in the world as a woman of that experience. What was it like also maneuvering in a somewhat platonic but also deep relationship with a character [Jules, played by Hunter Schafer] from a different community?

Zendaya: Rue and Jules is a relationship about pure love. I think it was love at first sight for Rue. I think the first time she sees her, she’s like, “I have to be in this girl’s life.” That’s why she invites herself to her house. I think it’s beautiful to watch Hunter because this was her first acting job. I’m just lucky to be able to be part of that really special love story that hasn’t been told or seen before.

Rodriguez: I’m going to roll the clip back a little bit and talk about how much of a powerful boxer you are. I have actually been an extreme fan of yours. You were on Disney, and you became a producer at 17 years old. How did you manage to do that?

Zendaya: I had just been doing Disney Channel for so long. I started when I was 13 years old. By the time I was 17, I had a better understanding and focus of what I wanted. A lot of times in this industry, it’s about recognizing your power and not selling yourself short. It’s kind of like that corny thing of know your worth. It’s knowing what you can bring to the table. And I knew that I had more to offer in a more professional capacity. I wanted the title of a producer when I was younger because I wanted to learn what it was like to do all that stuff behind the scenes. My hope is, the more that I’m able to do the behind-the-scenes stuff, the more voices I can uplift that aren’t necessarily mine.

Rodriguez: It’s funny that you mentioned knowing your worth. A couple of days ago, a little personal day, I was with my boyfriend. And then out of nowhere, I said, “I have to know my worth.” It’s a slow, gradual build. It’s like a ladder: You have to constantly — especially as women in the business — we always have to find our way when it comes to our worth. And I’m so glad I found my worth as a strong Latina melanin Black trans woman in the industry. And most of that came from a lot of people on the television screen. One of them being you.

Zendaya: That is so beautiful.

Rodriguez: As we all know, we’re living in an age where there’s Ms. Rona, where she’s creating a new norm for all of us. And with that being said, I’m sure we all know that production has been postponed. How did you deal with that?

Zendaya: We were supposed to go back to work, I believe, on March 16. And three or four days before that, they were shut down. I can’t complain. I’m very lucky to be safe and healthy and still know that I have a job, “Euphoria,” that will be there. I think all we ever wanted was for people to feel seen through our work. And so that’s all I want to continue to do, to show the human side of what addiction does to a person. Hopefully, I get to get back into my Chucks and do it again.

Rodriguez: Yeah, girl, because we want some more Rue.

Zendaya: I think one of the most impactful parts of “Pose” is the way it reflects and showcases the AIDS epidemic and how it affected the community. What are your thoughts, bringing that to life?

Rodriguez: It’s heartbreaking every single time. It’s heart-wrenching, but it feels so beautiful because for a while there was a separation, and it almost felt like people were being left out. When I say that, specifically it’s the African American community. For me, I always wanted to make sure I showed what a lot of people did in the LGBTQIA community to make sure that their loved ones were OK. Most of them were displaced. I wanted to try to at least convey what Blanca was doing. Aside from her being a mother, she was someone who knew that she had a future, and she wanted to make sure the kids behind her know that it’s going to be a fight. But at the end of the tunnel, there’s going to be a light.

Zendaya: In many ways, I feel like Rue is just me in another version of my life or a different way my life could’ve gone.

Rodriguez: I went to go see “Spider-Man,” and I solely went to see you. I’ve always seen Mary Jane, who I love dearly, her green eyes and her red hair. But seeing you and the way you took it there and you gave such a total different spin, I just want to know what that was like.

Zendaya: “Spider-Man” was one of the first movies that I did outside of Disney Channel. And yeah, I didn’t have much to do in the first movie, but I was so just excited to be doing the movie at all. And I was lucky because they already kind of wanted to re-create the character and turn her into a new version of what I think maybe the original Mary Jane character represented, and just do it in our own way in this Marvel Cinematic Universe.

I kind of came into it and there was already on the page a smart, quick, sharp young girl who comes off a bit quirky or offbeat. I have a lot of fun doing it. I like being able to do comedy and things that aren’t so heavy.

Rodriguez: What was the set like? Were you harnessed?

Zendaya: We got to travel so much for that last movie. I spent most of my time in London, and when you wake up at three in the morning, I’m literally running outside the Tower of London before it opens. I get to run from these killer drones that nobody can see, because they’re not there yet.

It’s massive. It’s very different from “Euphoria,” where it’s close and you have more time. Whereas on something like “Spider-Man,” it’s such a huge thing. And there’s so many secrets, and half of the script you can’t even read because there’s too many spoilers for, at the time, “Endgame” and all these other things. It’s like, you don’t really know what you’re doing. It’s just so big that you’re like, “I’m just going to figure it out as I go.” And me swinging around, we did a real swing, but they didn’t end up using it. We ended up really just being carried maybe two feet off the ground.