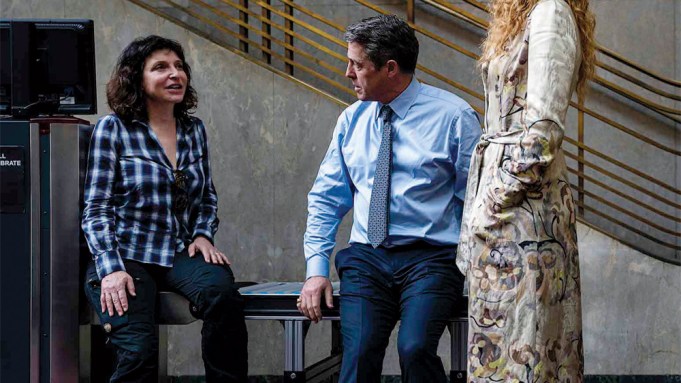 Emmy-winning director Susanne Bier has been on a hot streak for the past few years, with projects ranging from thought-provoking limited series (“The Night Manager”) to intensely emotional films (“Bird Box”). Her latest venture is a six-part adaptation of Jean Hanff Korelitz’s 2014 novel “You Should Have Known,” retitled for HBO as “The Undoing.” Bier executive produces and directs all episodes of the series, which was created by David E. Kelley and stars Nicole Kidman as Grace, a woman whose seemingly perfect life is upended when her husband, Jonathan (Hugh Grant), disappears right around the same time Elena (Matilda De Angelis), a parent at their son’s school, is found dead.

It’s still rare that a television director is also an executive producer on a series, but it’s even less common for one person to helm all episodes of a series. How did that volume and extra responsibility affect your process?

Because I come from auteur feature films, which is very much the European tradition, I don’t think I could have done it any different. The way I work is so ingrained in, essentially, taking charge. That doesn’t mean to say that [executive producer] David E. Kelley isn’t totally doing what he does, but because I come from a different place than traditional TV, I see the role as slightly different. I do feel that it’s a shared vision — that it starts with David and then spilled over to me and we’re totally aligned in it.

In speaking to that vision, how did you strike the tonal balance between family drama and thriller-mystery-whodunnit?

I wanted the whodunnit or the thriller or, you could say, the sense of the world falling apart because nobody can trust anyone to be the red line or the strongest trait. And then I wanted the family story — the forgiveness or the not forgiveness, and them trying to talk through it — to be a result of the existential confusion that it brings when you realize that no one is exactly who they seem to be.

That feels like such a fine line to walk with Nicole and Hugh, in terms of not wanting to give away the secrets too soon.

There was a lot of deciding in the editing room because they are both incredibly generous actors, and very emotional actors. Specifically Nicole is very much about being in that acute situation and having a very deep emotional truth. As it is with Hugh, but they have a slightly different way of accessing it. They would give that, and at times we would be oversharing while shooting and then paring back in the edit. That’s the beauty of the edit: It’s usually easier to pare things back than to push things [that] aren’t there. We had a lot of conversations about, when do we twist it and when do we turn it? Something I feel is often a mistake in a thriller is when the actor feels that they have to carry that responsibility and they have to hold back — because what happens is they become disengaged. And so I think it’s about letting the cast know that you are aware of who knows what at what point, so you don’t feel that in the scene, as an actor, you need to edit at the same time. It’s not necessary; I will do that.

Did you have a certain guideline for shooting Nicole’s character, Grace, versus Hugh’s character, Jonathan, in order to lead a viewer into their very different head spaces and perhaps even subtly suggest guilt or innocence?

[Grace’s] world is falling apart, so it was crucial that the audience understood that. In a way we were within her mind — to a point. There is also a point where you may feel you don’t trust her all the way, necessarily. And yes, it was conscious about when to do that, but they’re also hugely intelligent actors so they also play the game and how interesting is it if I’m facing that person in a slightly dubious way?

How do you feel about the audience trying to solve the case as they watch? Do you want them to suspect Grace, not just Jonathan, at certain points?

The book is called “You Should Have Known” and there’s a lot of attention within this thriller about what we expect, our own anticipation and how that filters into our own perception of what is true and what is not true. And inevitably, that is also the case with Grace. Yes, of course I would love for audiences to be confused by it, and I hope they will, but I also think that the whole game of, “Am I seeing the real person or am I seeing what I want to see?” is a very important trait of it.

“You Should Have Known” inspired the story of “The Undoing,” but how much did you use the source material on set?

David only really based the first two episodes on the book and then the rest is his own writing, so for me it was more fascination with the characters, the fascination with events and that psychological state of mind, more than the actual incidents for the book or actual references.

Did that lend itself to giving Grace more agency and capability in the show, so that she was not just a woman who was blindsided?

In a very interesting way it makes the character more enigmatic that she’s capable. There’s a huge gap between her inner turmoil and her outer efficiency — because that efficiency doesn’t go away. She kind of has a steeliness, which is also, from my point of view, quite fascinating. There was a calibration of, when is it enigmatic and when is it weird? And I think that calibration is made sympathetic by her strong relationship with her son [Noah Jupe] and with becoming much, much closer with her father [Donald Sutherland] throughout the course of the series. They start out being polite and slightly cold, and then you realize that underneath the formality, there is a real deep connection. And I think it’s part of why we love her and are, at the same time, slightly intimidated by her.

The early episode interactions between Grace and her father seemed to speak to the social class she grew up in — having to be a bit more proper or formal.

I want to say that the coldness in the beginning, for me, had just as much to do with the secrets in the family. Possibly the social strata somewhat enables those secrets better than other tiers in society — just because there are more ways to escape. But for sure, figuring out how to deal with the upperclassness of it and not be irrelevant was very important. But she is someone who has someone in that world and one foot in a world that is more accessible, like she doesn’t have maids; she cooks for herself. You might not notice it, but for me it certainly made a difference. I certainly feel if you’ve never been to a supermarket, how do you know about anybody or the world? You need to live a life that is not that dissimilar to the rest of the world in order to have an understanding of it.

The show spends time talking about how Elena had a son on scholarship, and the other mothers within that school seemed to look down on her for not being of the same circumstances as they were. What were the challenges in blending the two worlds for the show?

I was interested in Elena’s world, but those characters were not as obviously part of the dramatic engine [of the show], so there wasn’t the time to actually spend with them and go deeper into that world. I think the show makes some quite firm statements about the justice system, which, for me as a European, was a real eye-opener. It was a real eye-opener that the justice system [in America] is more about winning or losing, not about being morally correct. That was very educational. Do you know what I mean with that?

Oh yes, even just watching Grace interact with the police initially, going with them to answer questions because she assumes they are there to help her. If the situation were reversed and Elena was the one being asked to go down to the station, she likely would not have been so calm and unconcerned.

There’s also a sense that [Grace] is naturally protected, which Edgar Ramirez’s character is really offended by. There is an almost aggressive frustration in him, which has to do with wanting to solve a horrific murder and having to deal with a very entitled part of society, which [most] of the time gets away with whatever they do and whatever they’re hiding. And that is to me what’s really interesting and felt very disturbing, actually.

What were the conversations behind-the-scenes about Elena’s race and how hard to hit the discussion of bias within the police or these communities?

Had it been one of the other moms at the school, it would have been treated completely differently. Now it’s like a scandal they want to go away, but they don’t really want to enable the solution, which is why Edgar Ramirez’s [character] is, rightly, so incredibly frustrated. For sure there is a huge difference. The way they treat Elena right from the beginning has a lot of that unease — they feel uneasy because they’re not used to somebody like her in their midst.

Age: 60
Hometown: Copenhagen, Denmark
Commute tunes: “Stevie Wonder. You have to write that I’m laughing because it’s not part of the show at all, but it put me in such a good mood going to set every day.”
Cause she cares most about: “Women’s equal rights, women’s equal pay in the world.”
Last show she binge-watched: “The Good Fight”
What she’s reading: The “Outline” trilogy by Rachel Cusk