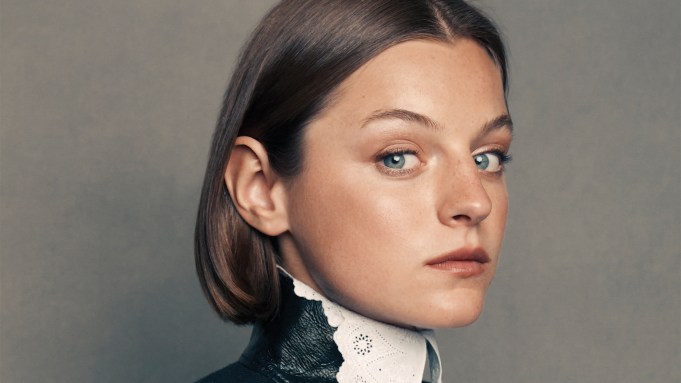 Emma Corrin is spinning out of control shooting a scene from “The Crown” Season 4 in the vast extravagance of a stately English house, Cher’s ’90s dance number “Believe” blasting over the loudspeakers.

Four minutes of increasingly frenzied flailing later, Corrin comes to a halt, panting with exhaustion. She has just captured a young Diana Spencer’s intense claustrophobia during a brutal princess crash course ahead of her wedding to Prince Charles. After weeks of isolation in Buckingham Palace, interrupted only by strict etiquette and ballet lessons, the 20-year-old Diana is going mad.

“Em, that was great, really great,” says the episode’s director, Benjamin Caron, approaching Corrin. “But you were mouthing the words the entire time. Can we do it again?”

Though Season 4 of “The Crown” technically isn’t Corrin’s television debut, it stands to be an introduction to many viewers as dramatic and triumphant as Diana’s first meeting with the royal family at Balmoral.

Diana’s life changed beyond recognition when she became Princess of Wales, and Corrin is acutely aware the same thing could happen to her.

Corrin was born in 1995 in the chocolate-box town of Royal Tunbridge Wells in southeast England. Although she doesn’t come from a family of staggering nobility like Diana, their paths in early life were not entirely dissimilar.

Neither Corrin, nor anyone else in the room, will forget the moment she was offered the part during a chemistry read with Josh O’Connor (Prince Charles).

“It felt like one of the most special, intuitive decisions I’ve made in my career,” says “The Crown” executive producer Suzanne Mackie. “Emma froze, she started to cry, Ben started to cry, and Josh gave her a big hug. It was really emotional; there was such a purity in it.”

But with that moment of sheer ecstasy came a word of warning from Caron — one Corrin says hasn’t rung true just yet but will.

“Ben said to me if you ever get followed by a photographer, or your name ends up in the paper, when you’re surrounded by flashing lights, and you feel daunted or overwhelmed or anything you feel, this is exactly how she would be feeling. You’re going to have a parallel experience,” Corrin says. “[The show] already has changed my life quite a lot, and I expect when it comes out, things will get a little mad for a bit.”

But for the time being, Corrin is sitting cross-legged on her living room sofa in rainy London. She looks out the window from time to time to check if it will ever stop; it rarely does in England. The flowing Diana gowns and sparkling tiaras of later Season 4 episodes have been swapped for an oversize black hoodie and a jagged pearl necklace, which she plays with as she talks via Zoom. Her adorable cockapoo, Spencer (named after Diana’s family, of course), is curled up next to her on a cozy blanket.

Like Diana, Corrin attended a posh all-girls boarding school, where she developed a taste for treading the boards through dance and theater. The thought that she might one day become an actor was planted even earlier.

She “must have been maybe 10” when she played the outlandish Toad of Toad Hall in a production of “The Wind in the Willows.” The reviews from parents were politely glowing, she recalls.

“Afterwards, someone’s mum came up to me and very innocuously said, ‘You were great, honey. Have you thought about being an actor?’ I think that planted a seed, and there was nothing else I ever really wanted to do after that,” Corrin says. “Marine biology was in contention for a little bit, but there was never a great chance of that happening.”

From there, her performance as kind, shy Audrey in her boarding school’s production of “Little Shop of Horrors” helped hone her acting and singing chops. But her fledgling acting career hit a temporary roadblock when she tried and failed to get into drama school two years running.

Instead, Corrin studied drama at the University of Bristol, where she found herself to be “deeply unhappy” almost from the moment she started. “I really didn’t like it because it wasn’t drama school; it wasn’t training in craft. It was the theory of drama, which I’m not that interested in,” she explains. “It’s weird how somewhere can be so wrong for you. In retrospect, I was miserable there for no particular reason other than it didn’t suit me. I wasn’t comfortable at all.”

After seeking advice from an inspirational high school teacher, Corrin plucked up the courage to apply to Cambridge (“The idea of going there was crazy; I’d never been the academic one in my friendship group,” she allows), and was admitted to study “education in English and drama.”

It wasn’t strictly drama school, but Corrin found her feet in the theater scene, learning from the independence and responsibility that came with putting on her own plays and “pulling my own weight.”

“People do compare it to the experience of doing rep,” she says. “You’re making all your own work, and the amount of effort people put in is incredible. It’s up to us to create everything. It was a great lesson in showing up and being accountable, not letting people down.”

Corrin first auditioned for Diana while still in school, and seemed destined to join the ranks of Oxbridge grads who fall into the world of film and television at breakneck speed after graduating. A fleeting turn in ITV mystery series “Grantchester” and a more prominent role as nightclub dancer and aspiring actor Esme Winikus in Epix drama “Pennyworth” served as good steppingstones for the scale of a production like “The Crown,” she says.

But nothing could have fully prepared her for playing Diana. After all, Olivia Colman, Helena Bonham Carter and Gillian Anderson weren’t in her university plays, and none of her previous roles had demanded a metamorphosis from “clueless little girl” to global fashion and philanthropic icon.

Akin to Diana stepping through the ring of fire at Balmoral in Episode 2 (all right, maybe not quite as intimidating), Corrin was a newcomer to a “Crown” cast that already had a full season together.

“I came in as Emma to a very established group of people, most of them insane household names, and I think it played to my advantage in crafting this character and how she would have felt,” she says. “There were moments where I felt very out of my depth. I was always made to feel at home, but it was an interesting situation.”

The colossal Netflix series has always been about the royal family as a whole, but there’s no doubt who the jewel in the narrative crown is this season. We meet Diana near the very beginning of Episode 1, prancing around dressed as a magical tree from “A Midsummer Night’s Dream” and batting her eyelashes at a blushing Prince Charles.

The teenage Diana introduced at the beginning of Season 4 is a fizzing ball of honesty and energy who dances the night away with her girlfriends in London clubs and sports an array of spectacularly hideous Sloane-y sweaters.

She’s a far cry from the dazzling princess the entire world remembers. Corrin loves that.

“It was wonderful to take her back to that time. When she met Charles for the first time, it was just that she had a crush, and that’s all I had to play,” she says. “It’s something I can so relate to, that thing of not wanting them to see you, but obviously really wanting them to see you, and how you’re going to relive what happened a million times in your head after.”

Diana dreams of marrying Charles and becoming a princess. However, Charles’ coldness, the royal family’s suffocating traditions and her own debilitating eating disorder combine to shatter those aspirations.

Many viewers may be “blindsided” by the version of Diana she portrays, Corrin says. Showrunner Peter Morgan and the writers tried to “move beyond the sensationalism and the cult of personality,” she explains, which continue to haunt the princess’s memory to this day.

Caron says that Corrin’s “genuine empathy” for Diana helped her understand the princess as a person. “I think that shows in her performance,” he says. “She walks that line between strength and vulnerability. Everyone struggles with tough love, no one more so than Diana, and Emma captured that aspect of the human condition, that desperate intensity of youth when everything feels all or nothing. Viewers will come to this season with a picture of Diana in their minds. I know I did. But Emma’s performance is so compelling she will very quickly win people over as ‘The Crown’s’ Diana.”

Corrin was just 2 years old when Diana died in a tragic car accident (which will surely be a pivotal moment in the final two seasons), and although the actor has no living memory of her, people of a certain age volunteer their recollections of the princess.

“My parents’ friends feel the need to tell me about her, as if I can do something with it. They’re sweet, well-meaning and always very tenuous stories. They’re all ‘I had an uncle whose best friend, well, his brother sat next to her once at dinner.’ She’s always done something outrageous that everyone finds very funny and lovely. It’s a phenomenon; it helps you get a feel of what people thought of her,” Corrin says. “Everyone has a Diana story; I feel like I should start collecting them. I suppose I have my own one now.”

From the moment Diana became a princess, the eyes of the world followed her everywhere she went. There’s no question she handled fame in a manner utterly unfamiliar to the royal family, which helped her build legions of adoring fans.

Corrin isn’t sure how to deal with the fickle beast of fame quite yet. But she’s trying to figure it out, hoping that when the curtain rises on her grand opening, she won’t go spinning out of control.

“I get very disoriented by the fact that people will know you without knowing you at all. I get torn between feeling like, ‘Well, if the public are going to know me, I want them to know the real me,’ and then necessity, which is actually not to share anything at all and to keep yourself very private,” Corrin says. “That’s a very difficult thing to do because I don’t like inauthenticity. But I suppose all of this is to some extent inauthentic. I’m probably overthinking it — no, I’m definitely overthinking it. I know I’ll really miss playing her. I’ll miss her.”