In April 2020, just when “The Challenge” audience was getting used to sheltering in place in their own homes due to the COVID-19 pandemic, MTV launched the “Total Madness” season of that reality competition series, which sealed its contestants off from the general public and housed them in a bunker, due to its post-apocalyptic theme.

Having shot that season before the pandemic swept the globe meant that production on “Total Madness” was business as usual for the team, led by showrunner Emer Harkin. It wasn’t until the “Double Agents” season, which premieres Dec. 9, that they had to figure out how to safely scout, travel cast and crew and film full-contact competitions amid the ongoing real-world pandemic.

“For everybody [in the cast], it was about getting [their] head wrapped around [the new] steps that would get us to the show, and then once they were in the house they could proceed as normal,” Harkin tells Variety. “By ensuring they were all in quarantine and all had negative [COVID test] results, it meant we could afford ourselves that position. There was really no way we could execute our show otherwise.”

What will play out on-screen over the course of “The Challenge: Double Agents” looks like every other season, and one important gameplay was even carried over from the “Total Madness” season: the idea that to make it to the finals, a challenger had to earn a skull by competing in an elimination round. Of the skull addition, Harkin says: “It’s something that totally turned our game and the format on its head. I think the audience really liked it, I think the cast really liked it. That’s not to say it needs to have a place in every season going forward, but what we did this time was we had a limited number of skulls and when they’re gone, that’s it. It raised the stakes even higher.”

But the stakes for Harkin and her production team on “The Challenge: Double Agents” were also extremely high, due to the nature of needing to keep everyone safe, healthy and employed amid the pandemic. They shot the season over nine weeks this fall and never once had a positive COVID test result, she shares. But this success didn’t come without its own challenges. And this time around, the 36-season-old show even experienced a few major firsts, including building a club. 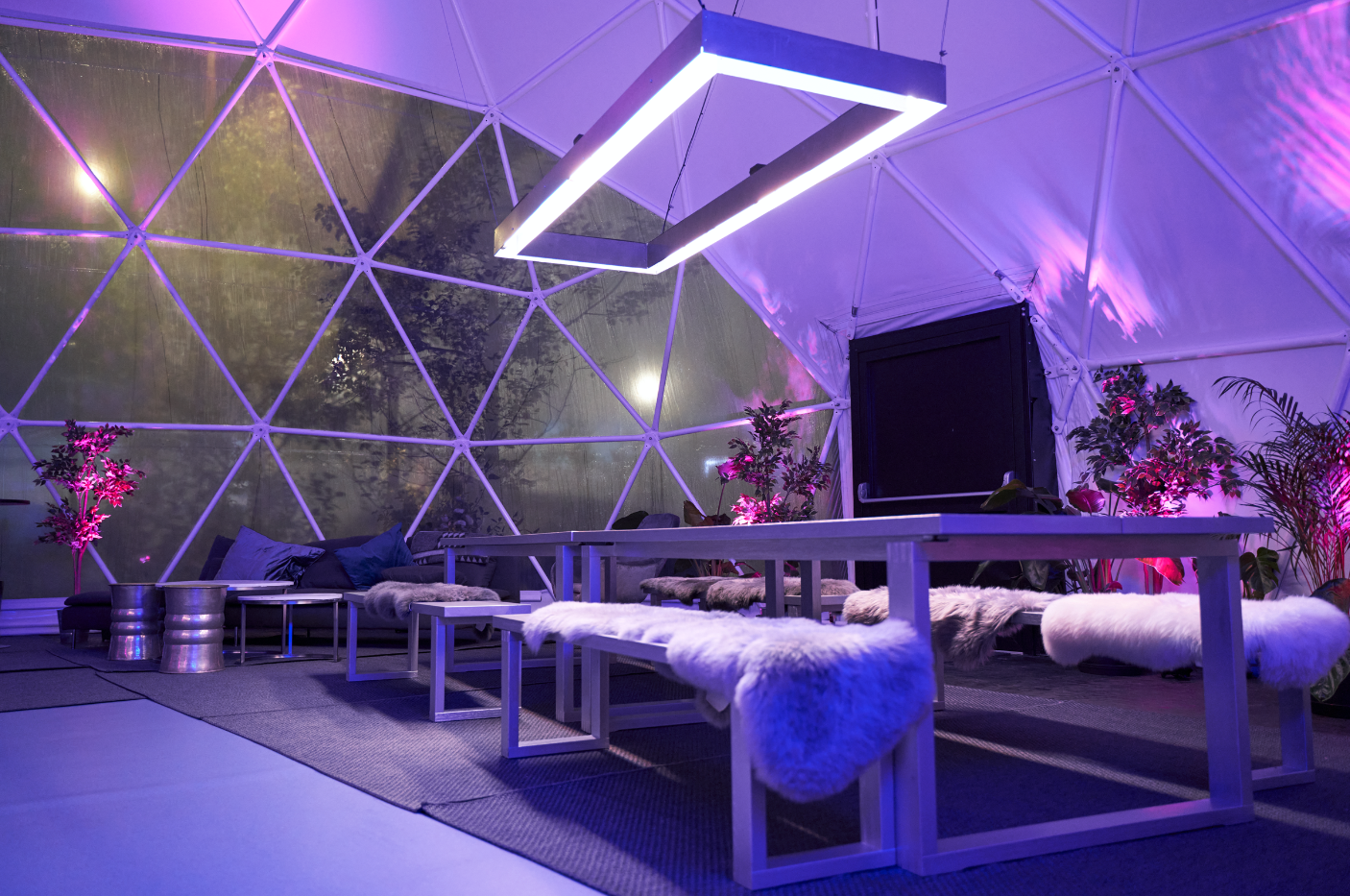 In a typical season when challengers want to go out on the town at night, they hop in a van and camera crews follow them to a location production has scouted. This time around, due to the need to keep them in their bubble, the show created that space separate from the house in which the challengers lived during filming. Having the control over the space allowed for physical safety of all who stepped inside, of course, but it also provided the production the opportunity to tie the space into the theme of the season with “quite a specific look” and provide a much-needed area to aid in challengers’ mental health.

“It’s something we deemed important because it’s really good for them to be able to let loose, let their hair down and relax after a challenge,” Harkin says. “I think that’s definitely diluted if you’re just partying in your living room, or where you ate your breakfast that morning.”

Another new experience on “The Challenge: Double Agents” was finding the location for the show in general. They landed on Iceland, in part because of its topography, which has everything from glaciers to volcanos to black sand beaches that would make for visually interesting backdrops for competition challenges, elimination challenges and the eventual finale. Due to travel restrictions, this is one season of “The Challenge” that will not see its finalists switching locations at the end of the season, Harkin reveals. Travel restrictions also meant that Harkin could only scout locations virtually this season.

“Traditionally, I scout a couple of months in advance, so I’ll go to multiple countries and check what they have on offer. That was simply not possible this time,” she says. Instead, she took virtual tours of everything from potential challenge locations to cast house properties and crew accommodations. “Being able to do that virtually was really, really eye-opening [but] it’s also quite daunting because you can never underestimate the advantage of having boots on the ground and really seeing and feeling a location.”

Harkin began pre-production on this season in January 2020, with plans to film in March. But as that month came closer and the coronavirus spread, plans for the season shifted accordingly, too. Suddenly the “stunning backdrop” of Iceland was only half the importance of filming there: the other half was how safe it would be for the cast and crew who were flying in from all over the world.

Harkin traveled to Iceland in July, with other members of the team joining her through September, when they began filming.

“When we arrived there was a 24-hour quarantine. The way that they do it is you arrive at the airport and you go through — just like going through customs — a COVID booth [where] they do a test. You download an app and they alert you on the app when you’re cleared and then you can start moving freely,” Harkin says.

The production “owned” a hotel, meaning they took over an entire hotel space for the international crew that had flown in for the duration of filming. The crew would travel to the locations and back to the hotel together in a bubble of sorts, but the production did also employ a number of locals who would go back to their regular homes at the end of the day. Those local members of the crew were kept completely separate from the cast, through a tiered system represented by colored bands that the show created.

“The bands dictated where you could be on set,” Harkin explains. “If we had a caterer who was local to Reykjavik and not part of our home bubble, they would never be near the cast; we would have a conduit person who would take the meals and bring them to the cast. We basically treated our cast as one person: We had them all in quarantine and rigorously tested so we knew when they entered the cast house they were all healthy and well. So we just needed to preserve them.”

Everyone took COVID tests every three days to ensure they were still negative, Harkin says, which amounted to 3,000 COVID tests throughout filming.

Since many of this season’s challengers are veterans with a deep history with the show and this particular production team (“Double Agents” is Chris “CT” Tamburello’s 18th overall season, for example), there was “a strong trust” that helped them say yes to signing up for an adventure they love under new guidelines, Harkin says. Noticeably absent is Johnny “Bananas” Devenanzio, a “Challenge” veteran who won “Total Madness.” But his absence is not intentional on the show’s part to “omit a previous winner,” Harkin says. Putting together the cast, which this season includes more newcomers than usual and also professional athletes Lolo Jones and Lio Rush, is a “crazy jigsaw puzzle,” she notes. “People’s willingness to travel during COVID” was one new piece of that puzzle this season.

If any of the cast members had received a positive COVID test and been unable to start the season, there were alternates on standby. But, if someone had tested positive in the middle of filming, production would have had to shut down, send that person home and address their exit in the show. “We couldn’t keep people there for months on end, just waiting,” Harkin admits.

The structure of “The Challenge: Double Agents” is an individual game disguised as a team one, Harkin says. (“You control your destiny in the game at every juncture, so it is most certainly not the pairs format we’ve done before and there’s twists to this format that we’ve never done before.”) But while the cast interacts closely with each other both inside the house and on the challenge field, the crew had to maintain the safe, six-feet apart distance from them at all times. This meant the camera crew used different lenses in order to achieve some of their closeups and cast members put on their own microphones whenever possible, Harkin says.

Often having to run along side challengers while carrying their gear in competitions, the crew on “The Challenge” always has to be in fine physical shape, but this season they had to be able to do it all in full PPE. While the cold weather in Iceland sometimes made them grateful for the masks, which provided a little warmth, Harkin says, she also knows it was no easy feat. “Our security guards were wearing masks and PPE 24/7,” she says. To keep everyone in the crew from over-exerting, “we ensured that everybody took regular breaks and stepped outside so they weren’t with enclosed with the cast for prolonged periods. We would tag camera crews out much more frequently to cover scenes,” she adds.

“The Challenge: Double Agents” will air through early 2021, as the pandemic, too, still rages on in many parts of the world. Typically, the competition series airs more than one season within a calendar year, and delivering another season under COVID-safe guidelines is something that Harkin feels more than ready and willing to do.

“Now that we’ve done it we’re in such a privileged position to know how to do it,” she says. “We know how to travel crew and how to travel cast and how to quarantine; we know the types of countries we should shoot in; we know the types of properties and vendors we want to work with, right down to catering providers and cleaners. Now that we’ve got that framework in place the sky’s the limit, really.”