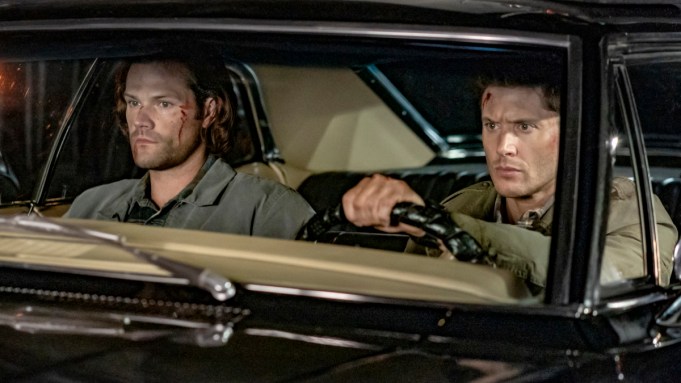 It’s the start of a new year and a new (final) batch of “Supernatural” episodes, and what would such a beginning be without the Winchester brothers once again split apart from each other?

At the end of the eighth episode of the 15th season of the CW demon-hunting drama, Dean (Jensen Ackles) and Castiel (Misha Collins) were presumably heading back to purgatory after Michael (Jake Abel) opened a 12-hour rift. Meanwhile, Sam (Jared Padalecki) and Eileen (guest star Shoshannah Stern) were tricked and trapped by Chuck aka God (Rob Benedict).

When the season returns with an aptly-titled ninth episode called “The Trap” on Jan. 16, those pairs are working together to learn some new truths and try to stop Chuck.

“It’s really a chance to let both boys be the star of their own story,” showrunner Andrew Dabb tells Variety of the separation. “They’re together a lot, and we love to keep them together, but there are times when, for the sake of the story, it’s best if we do two things at once, so splitting them up is a good way to do that.”

Within the story, Chuck needed the brothers split apart for “reasons we will discover shortly,” Dabb adds. Luring Sam away from Dean under the guise of helping a fellow hunter puts him in the almighty being’s clutches, while Dean is revisiting “a very formative place” for him with a clock ticking on his time there.

“After [“The Trap”] Sam and Dean are going to find their lives fundamentally changed,” Dabb says. “Episode 9 is a pivot point for our season. Every episode after it will be deeply affected by it.”

Here, Dabb discusses “Supernatural’s” return to purgatory, the pairing of Sam and Eileen, and how Chuck’s written ending for the Winchesters will pay off.

What was the inspiration behind returning Dean and Castiel to purgatory at this point in the final season?

In some ways this is, particularly for Dean, a way to revisit a very formative place for him as a character. There are certainly moments where Dean changed fundamentally: losing his father was one, going to hell was one, going to purgatory was one, the return of their mother was one. So in our last season, we haven’t touched base with all of them, but we’ve been nodding towards that, so to have Dean go back to purgatory with Cass in a twisted replay as to how they were years ago was something we wanted to do. It also became clear to us that if we’re dealing with God and we’re dealing with creation, then we have to deal with all of creation. For us, it’s other universes, heaven, hell, purgatory — it’s all part of the same cosmology.

How different is this purgatory from what the audience or even Dean remembers from Season 8? Is it shot differently to reflect the changes Dean and Castiel have undergone in the time since they were there last?

It’s the purgatory that he met Benny, it’s that same exact purgatory, yes. We shoot the show a little bit differently now than we did back then because technology changes and all of that, but at the end of the day, we wanted it to have the same fundamental feeling.

There is a literal ticking clock on Dean’s time in purgatory, implying he could be stuck there once again, and Sam is standing in front of Chuck, who could just snap his fingers and do whatever he wants to him. Who should the audience be more worried about at this point?

I think you should probably be more worried about Sam, because even if God doesn’t snap his fingers and kill him, God can do a lot of damage — not just physical damage but psychologically. God knows literally everything about our guys: He knows what they want, he knows all their secrets, and he can use that to undercut them in ways we haven’t really touched on. It starts in Episode 9. Maybe physically Sam’s not going to die, but psychologically a lot of stuff is going to spin Sam into, I don’t want to say a darker place necessarily but, a place where he starts to doubt himself and doubt a lot of things around him pretty strongly.

Was it important to pair Sam with Eileen so she could be a counterpoint or sounding board when he gets to this point emotionally?

I think it was important to bring her back and pair them together for a number of reasons. No. 1 is we just liked the two of them together, and No. 2 is when you’re in a world with Chuck and Sam, both of whom are God-like in their own ways, having Eileen there to offer some real world, boots on the ground balance is helpful for that. It really helps to add a normal person’s perspective, even though Eileen is not normal either, but as normal as it gets on this show.

At what point does Sam try to use his cosmic link against Chuck?

I would say the link gets wrapped up sooner rather than later. But without giving too many spoilers, that proves harder to do than imagined. The tension for Sam now for Sam is not if he’ll survive it but how he’ll survive it.

If Chuck created everything, theoretically it feels like killing him should end everything, including Dean and Sam. They’ve been willing to sacrifice themselves before, but the show has had a long-time message of “kick it in the ass” and “always keep fighting,” which some may feel is negated if they sacrifice themselves to stop Chuck. How did you approach these pieces of the storytelling?

[Stopping Chuck] has been the biggest question we’ve had this season. We’ve, over the past 15 seasons of “Supernatural,” developed a pretty healthy cosmology in terms of rules and things like that. We’re not looking to violate those rules, but within those rules, we have found a way to bring Chuck to a satisfying conclusion. It’s tough. It’s a hard thing to do. You’re dealing with cosmic forces, you’re dealing with God. It’s not like Dean can just stab him in the heart. There are consequences for all of that stuff, and that’s one of the things the guys are grappling with as we go forward in the season.

The problem Sam and Dean have is that that spell was given to them by Chuck so the question becomes, “Would Chuck hand them the way to stop him?” In the previous episode with Adam, they literally said that, so it’s a matter of, now that they know they’ve had an unreliable narrator this entire time, how can they themselves dig up the answers? The answers that we are giving people have been laid in this season, last season — it’s something that has been quietly going on in the background for awhile. We don’t want to make up something whole cloth, but at the same time, nobody wants to see the same story they’ve seen before, and we certainly don’t want to tell that story, so it’s a matter of doing it in a way that honors the past, honors our lore, but takes our guys on a journey we haven’t seen before.

And how does the show’s message come into play in crafting the end, especially when you’ve said, “It’s a true ending, and in a true ending, people can’t keep coming back over and over again. They’re going to be facing life or death — this time it’s for real,” yet Jensen and Jared have admitted they’re open to more stories down the line?

I think the show has always been about keeping fighting and hope and all that [and] we don’t want to lose that in our last season. I feel no pressure to end this in an open-ended way. Should “Supernatural” come back, most likely that’s going to be somebody else’s problem. [Executive producer] Bob Singer and I have said from the beginning we’re writing a true ending to this show. It’s not like something is going to happen to Sam and Dean and then we pull back from the shadows and out steps Jeffrey Dean Morgan. That’s not the game we’re playing.

The ending for the Winchesters’ story that Chuck wrote this season included a grave marked with their surname. How much of that moment was foreshadowing versus a red herring versus something in between?

Chuck’s ending, what he wrote in Becky’s house, will pay off completely. It’s not needless; it’s not fading foreshadowing. It’s something you will see pay off at some point during the season. It’s meant to create a little tension with the audience, but my guess is it kicks much more into gear later in the season than it does now.

This final season has had many callbacks to earlier days. Is there an element of bringing the story full circle at the end in regards to how Sam was on the road towards a normal life and Dean pulled him back in?

Not necessarily. The guys have changed, so it would be weird to have them still be holding onto the dreams they had 15 years ago — and that was their perfect life. Certainly we want to give people closure in a lot of different ways in this final season, but I don’t think we’re actively looking to beat-for-beat mirror, to end these guys where they started. To me, that invalidates the journey, in a way.

Since you’ve said you’ve seeded pieces in recent episodes, is there a road map to the end that you think fans will figure out ahead of time, or would you be upset if they knew exactly where things were headed going into the finale?

If someone figures it out, that’s great. People are really smart, and it wouldn’t surprise me if that did happen. But that being said, it’s not a mystery, and in no way shape or form are we saying, “If you figure this out before the finale, you win a prize.” My hope is that, like any good finales, it’s surprising but in hindsight inevitable. But fans theorizing I think is great, and I can guarantee you someone is going to guess it.

“Supernatural” airs Thursdays at 8 p.m. on the CW.