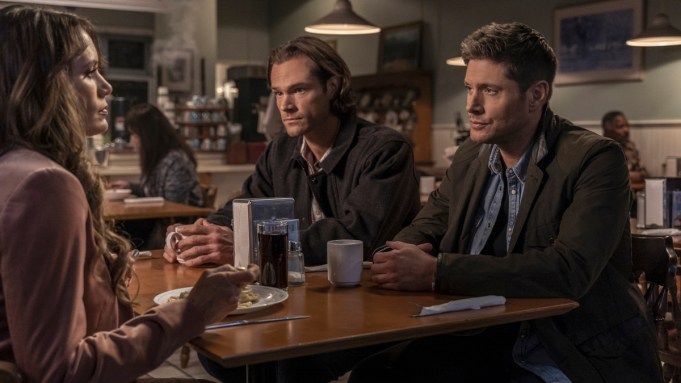 SPOILER ALERT: Do not read if you have not watched “Gimme Shelter,” the 15th episode of “Supernatural’s” final season.

With only a handful of episodes left before The CW’s long-running demon-hunting drama “Supernatural” signs off for good, every line of dialogue, every frame of footage and every decision — from guest star casting to guest director hiring — counts. Matt Cohen, who got his start on the show playing young John Winchester in 2008, admits he was certainly feeling the weight of that responsibility when he stepped on set to direct “Gimme Shelter,” the 15th episode of the final season.

“Gimme Shelter,” which was penned by staff writer Davy Perez, was a dialogue-heavy episode that featured two seemingly distinct stories, for which Cohen focused on the common emotional tonality. Half of the episode featured Dean (Jensen Ackles) and Sam (Jared Padalecki) reconnecting with God’s sister Amara (Emily Swallow), at first because they need her to get to God, who is busy destroying the other universes. But their time with her delivers the all-important revelations that she is not actually the first born, but God’s twin (“creation and destruction, light and dark, balance”), as well as why she really brought the Winchesters’ mother Mary (Samantha Smith) back from the dead a few years earlier. The other half of the episode focused on Castiel (Misha Collins) and Jack (Alex Calvert) on the case of deaths and disappearances of people within a religious group.

“I wanted the scenes to bounce off of each other and you’re battling two different predicaments, but very similar. Each of the four characters in these scenes — Cass, Jack, Amara and Dean — are fighting for their own thing for their own reason, therefore living their own truth in the eyes of God,” Cohen says.

In order to truly sell the various levels of emotions in the episode, Cohen notes he didn’t want to rely on fancy camerawork or elaborate setups, but instead focus on tight closeups of the actors’ faces.

“I had come off working on a soap opera a few years ago and there is something in me that soap operas do very well, and it can be really irritating to the actors a lot of the time [but] the camera will just sit on your face until your face sells the moment, and that’s your cut point,” he explains. “I tried to bring a little soap opera to the sci-fi experience.”

Here, Cohen talks with Variety about his experience directing “Gimme Shelter,” including setting up the seemingly cryptic news Castiel has to deliver to Dean.

Right up front in the episode, it is stated that Castiel and Jack’s case is quote-unquote just a murdered kid, but the show has proven before that quote-unquote just people are often the worst monsters these guys will face. What went into your shot style selection for those scenes, in order to still bring a creepy and mysterious, even if not otherworldly, vibe?

As a new director the only things I’ve had a chance to direct are action-based, so when I got this episode I was a bit flustered that there wasn’t a huge fight sequence and there wasn’t a car chase or any stuff like that. I read the script several times and to me it became a script of characters and really just each person dealing with their own truths and letting these truths intersect with each other, so I decided to let the faces of the actors really tell the story. It’s the traditional way that stories have been told in Hollywood for so long, without doing too much, so I thought, “Let me keep it more simple and let me let these actors work. Let me get out of their way and let me let them perform.” So I wanted to keep the creepy in the eyes of the actors. And you’ve got Jack and Cass on an emotional journey, and there’s a love story there between the two of them, and there’s a love story between those two and the boys, and I wanted that to play out, too. I knew they would be able to deliver a performance to me. If I said, “Misha, this is what we’re doing, just do it,” and then let the camera run until what I was looking for comes out, that’s what they did. Because they’re such pros, it came rather quickly. The caliber of actors that I was working with, including my guest stars, are some of the best that are doing it in television, and I wanted that to be portrayed.

What went into calibrating the emotions Castiel and Jack exhibited with each other versus with the group members? Castiel, for example, seemed more open and raw when speaking about Jack during that group meeting than he has been in a long time.

Everybody loves Castiel, he’s our favorite angel, but he can be a dry presence. There are these moments in the truck where Cass and Jack are driving and this information gets dropped on Cass about what Jack is planning to do, and I wanted to see what Misha would do with that. He’s been this character for a long time and I didn’t want to steer him off his course, but I pushed him and I let the camera run for a few takes in a row, and I thought what we got was really interesting: It’s a complete internal battle of Cass sitting there and trying to deal with and trying to comprehend the sacrifice that Jack is willing to make for the boys to forgive him — and how irritated and somber at the same point that made Cass. It is a little more than we typically see from Castiel, but it’s also not outside the realm of Castiel, and that’s some of the most honest Cass and Jack we get to see. It’s a father-son talk and the talk you don’t want to have. It was, “Hey I know you’re my loved one, but you’re going to have to pull the plug on me if you want everybody to survive,” and that’s not easy information to digest. [Misha] just allowed it to fully affect him, and I think what you see in that scene is shades of Misha as a father intertwine with Cass’ feelings for Jack. And you’ve got to let that happen. I don’t want to be the director that gets in the way of these guys. I want these guys to deliver the performance that they know their character should be delivering.

Similarly, when Dean told Amara he would never hurt her, he was emotional doing so. Is their connection too strong to let him go through with the plan?

Sam and Dean are the “find a way” guys: They’re going to find a way and if, in the process, it means betraying or hurting someone that either one of them has developed feelings for, unfortunately, their eyes are on the prize and that prize is life and mankind. I think Dean’s feelings are completely real towards Amara, and Amara’s towards Dean, and there are moments of, “Can I really trust you? Should I really trust you?” It’s the same moment when anybody tells you something drastic. No matter how long you know them, you still look across the table, and in your mind you’re going, “Is this their truth, or is this THE truth?” And I think everybody’s battling that, and it reflects a lot of what’s going on in society right now: Every human in this country is living in their own truth, so therefore everything outside their truth is wrong, and they’re going to fight against what they think is wrong. And I think Amara and Dean are at that point. They want to be in the same fight, but the fight’s never going to be the same when you’re dealing with a supernatural being and you’re dealing with Dean trying to save mankind and stop God. But Emily and Jensen, they sit across the table from each other and magic is going to happen. They’re saying a million different things within their expressions. That’s what good actors do, and you’ve got to let good actors be good actors. The scenes between Amara and Dean are some of the strongest acting scenes I’ve ever seen on television.

There are a few moments in the episode that set up things to be paid off in another director’s episode, from Sylvia getting in the police car, which is being driven by the crossroads demon, to Cass saying he has something important to tell Dean, but not actually saying what that thing is. How much did you need to know about what’s to come with those pieces in order to get what you wanted?

Honestly, I was trying to avoid overselling fake moments, but I wanted to put the weight on the God storyline, with the pastor and the soup kitchen and the major, major difference in how our characters in this episode all view God and are dealing with God. I wanted to set up stuff that I felt would lend itself to the future episodes [in that way], but “Supernatural” keeps its secrets. I know a little bit; I just know barely more than you know. And you have a feeling, just being a part of it for 10 years, but this is the end, so I didn’t know how it was going to unfold and that information wasn’t shared with me. But there are setups and it is previewing what I think is some very heavy end-of-the-world type stuff [so] I need to get the audience thinking, “God may be watching this episode. God may be looking down on these circumstances and hearing these conversations. Is God speaking through our pastor? Maybe. Is God trying to put messages through Castiel to Dean? Maybe.” I don’t want to rule out anything, but I don’t want to oversell an abundance of false fronts to the audience, so I tried to keep it relevant and within the wheelhouse of “Supernatural,” which is, there is always a bigger story happening here.

Since lingering on actors’ faces was so important to this episode, what options did you actually have Misha throw out for what Cass needed to tell Dean in order to elicit a reaction from Jensen?

Listen, even if I did want Misha to say something, he would probably say whatever he wants. That sentence probably went something like, “Dean, I have something to tell you: This is the last shot and I’m going the eff home now.” Those guys are such pros that they can be within a moment and hop right out of that moment so well. I did tell Misha — I pushed him in a direction for that final scene and he didn’t want to go in the direction I was pushing him and we had a collaborative talk that ended up in what you see on the screen, and I think we both won. He had a take on it, I had a take on it and we met in the middle, and what you got was this actually terrified moment of Dean going, “Wait a minute, what’s going on?” and Cass going, “I don’t want to say to you what I have to say to you” and that’s where we ended up. There’s always the, “Oh I wish at the end of the episode I could shoot one more take and one more setup of Cass sitting on his hands and knees with Dean, and they’re emotional and you see what they’re going to say” — but that’s for next week!

“Supernatural” airs Thursdays at 8 p.m. on The CW.