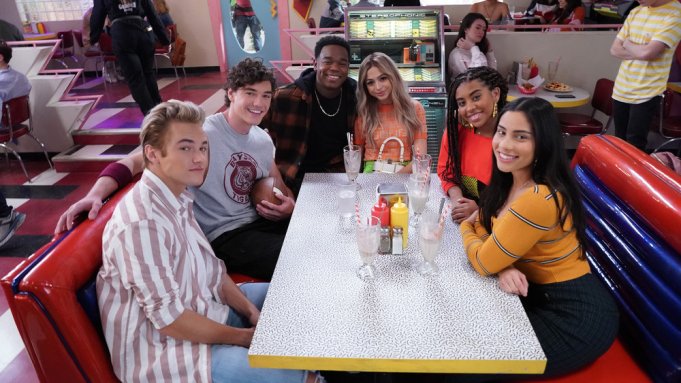 Although Peacock’s “Saved by the Bell” sequel series is set in 2020 and made for a 2020 audience, some things remained too iconic to alter, from sets such as the Bayside High School hallway and the Max diner, to central characters such as Slater (Mario Lopez) and Jessie (Elizabeth Berkley Lauren), and the overall comedic but still family-friendly vibe to the show.

“This show isn’t, nor did it want to be, the ‘Euphoria’ version of ‘Saved by the Bell.’ I don’t think anyone wants to see Slater sending dick pics,” showrunner Tracey Wigfield tells Variety.

The original “Saved by the Bell” launched on NBC’s Saturday morning lineup in 1989, with a primary audience of kids and teens (“tweens” are encompassed in that, as the term was not used back then). Because it was broad-reaching in its demographic and created primarily to compete with cartoons, its depiction of high school, especially in its first season, was extremely chaste. With the exception of a joke in the pilot episode about how Kelly Kapowski (Tiffani Thiessen) had multiple boyfriends before high school, the majority of the six core characters’ romantic lives were depicted as having crushes, attending dances, and giving pecks on the cheek. As the series went on, it incorporated more teachable moments about jealousy in relationships, as well as lessons about the dangers of drinking and driving and the importance of just saying “no” to drugs. The latter even came with a PSA from the cast and then-NBC president Brandon Tartikoff, and an extended D.A.R.E. campaign, in which series star Mark-Paul Gosselaar recorded an automated greeting for the 1-800 number.

Wigfield’s version of “Saved by the Bell” centers on six new core students at the high school, three of whom have grown up in their Pacific Palisades’ privileged environment and three of whom are new additions to the Bayside student body after Governor Zack Morris (Gosselaar) closed their school and Bayside absorbed some of the displaced population.

Wigfield didn’t want to “mess with my childhood” but says she did set out to make her “Saved by the Bell” “a level up” from the original in terms of edginess. But while romantic interests pop up (including a fight at a school event reminiscent of Zack and Slater’s teenage tussle), they are far from the characters’ main focus.

“Part of the reason I was such a fan of the [original] show was because I was in third grade and didn’t know what sex was, so I was like, ‘That seems like a nice amount of romance: people sometimes kiss in cars, but nothing else happens and nothing scary happens,” Wigfield says.

Just like the original, there is a misguided Morris (Zack’s son, Mac, played by Mitchell Hoog). “It’s because of how he was raised: with an amount of privilege that’s unhealthy,” says Hoog. “I was given everything that I want immediately. It never had a wait time. I think that’s a very dangerous thing, which makes me just blind and ignorant.”

There are also popular athletes (Jessie’s son Jamie, played by Belmont Cameli; and Aisha, played by Alycia Pascual-Peña), there is a popular cheerleader (Josie Totah), there is the ambitious and driven go-getter (Daisy, played by Haskiri Velazquez), and there is the sort-of outsider (Devante, played by Dexter Darden). But unlike the original, the Morris is not the center of the show’s universe.

“I tried to think about the show through a 2020 lens and how people watch the show now and what draws people to the show now,” says Wigfield, adding that there isn’t a true “one-to-one” comparison of new characters to the old ones because there were “fun subversions” the writers wanted to offer. For example, “Lexi is a little bit like Zack Morris, too. For Jessie’s son, although he looks kind of like Slater and is the jock, there was something funny to me that he was more the Kelly Kapowski on the show — that his archetype was the very emotional dumb-dumb. He walks around wearing half a shirt and it’s girls fighting over him,” she says.

(Berkley Lauren notes Jamie may be that way because Jessie, as a mother, is “highly overprotective [and] has infantilized him.”)

But, Wigfield adds, since part of the show was going to focus on poking fun at Zack — who learned a lot of individual lessons during his time at Bayside but, given his track record as governor, the major ones didn’t seem to stick — she wanted to bring the audience into the new show “someone who is nothing like Zack.”

Rather than create Zack’s son to be the antithesis of him, Wigfield and her writers’ room focused on Daisy. She may enter Bayside with fresh eyes, but she has one very important connection to the original: She does the infamous “time-out” fourth-wall breaks.

“When I was thinking about this show and what would be fun about it, I was a little bit inspired by those ‘Brady Bunch’ movies; there’s something interesting about having characters in present day who are a little bit stuck in the old show — but those characters can’t be the center of the show because they’re lunatics,” Wigfield says. “You need a straight man coming in and being like, ‘Why are you weird?'”

As Daisy, Aisha and Devante adjust to their life in their new school, they will be thrown into some of the classic “Saved by the Bell” moments, from a student council election to a harvest dance, a school play and football — which, for the first time in the show’s history, won’t be shown using archival footage. This new “Saved by the Bell” went on location to film at a real-life football field.

Being a more aware generation, they will also deal with issues from inequality to stereotypes head-on.

“We are specifically from the Latinx community and we’re not accustomed to seeing stories around us, and the fact that we’re able to spearhead this show as two Latina women means the world and hopefully will empower our community,” says Pascual-Peña of herself and Velazquez. However, within the show, Aisha is “met with misogyny and people underestimating her for being a woman when it comes to her wanting to play football and then she ends up overcoming every obstacle that’s put in her way.”

Darden adds that his character is immediately assumed to be an amazing addition to the Bayside football team — all because of his appearance. “I went through that in my own personal life with basketball and then transferring into the arts,” he says, noting that his character, too, wants to express an artistic side. “I hope it opens up the realm for people to understand that you can be multi-faceted.”

The “Saved by the Bell” universe has also evolved its school personnel. Years ago it was Mr. Belding (Dennis Haskins) trying to bond with his students so much he even showed up at their houses to complain about the women in their lives. Now, there is of course a new principal (played by John Michael Higgins), but Slater and Jessie are also hoping to guide the impressionable young minds of their alma mater.

Slater, once the captain of the Bayside football and wrestling teams, is now coaching football. “He’s stuck in his era, his glory days back in his day; [he] wears the same clothes, listens to the same music,” Lopez admits.

Jessie, on the other hand, is back at Bayside to be closer to her son “while her marriage is on the rocks,” Berkley Lauren says.

“I wanted to remain true to the fact that Jessie was a bit ahead of her time: she was a feminist, she was an activist and she had these very clear visions for herself when she was so young. So I wanted to make sure that when we reconnected with her we understood what she actually has accomplished. So we made sure her backstory in the 25 year break was filled with rich things she did succeed at: she did TED Talks, she has a PhD, she’s a best-selling author of parenting books, she probably was in politics,” she continues. “But what I also liked, just like in the original, was even though she seemingly had it all together, we also saw some breaking moments in the past and no matter how much we all grow, there’s still seeds of who we were as kids even in us as grownups. Her personal life is a bit of a mess and she is that perfectionist she always was [and] is a bit imbalanced.”

The trick for Wigfield and her writers’ room was balancing all of these new (and new versions) of characters, while still paying homage and respect to the original. The latter is done down to the last detail with references in dialogue (Bo Revere, anyone?) and Easter eggs that she made sure to have sprinkled throughout the various sets and scenes (Slater’s wrestling singlet in his office, for one).

“To me the fun of doing it is having these inside jokes with the audience, ‘Remember this?'” she says.

Most importantly, though, despite a more modern tone, the spirit remains: “‘Saved by the Bell’ does tell stories that no matter where you come from, what background, there’s a place for you,” says Velazquez.

“Saved by the Bell” streams Nov. 25 on Peacock.