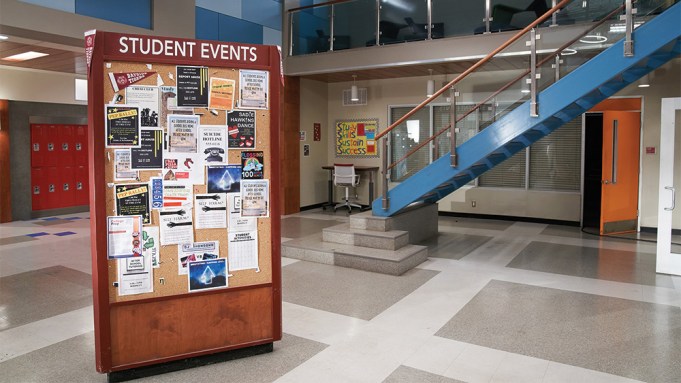 A lot has changed in the almost 30 years since Zack Morris (Mark-Paul Gosselaar) and the gang from the original “Saved by the Bell” graduated from Bayside High School. Not only is he now the governor of California within the world of that show, but the school itself has gotten a major upgrade for the new Peacock series, courtesy of production designer Joseph Lucky.

Iconic original sets including the Bayside hallway corner, principal’s office and the Max diner have been painstakingly re-created — often, Lucky says, by using screenshots as references because the original sketches have been lost to time. “Trying to mimic someone else’s work [Ken Johnson designed the original] isn’t as easy as it seems, so the challenge there for me was to actually get it right and then to put my touches on it,” he explains.

Those touches include the distinct red color of the lockers, which was selected after he, showrunner Tracey Wigfield and executive producer Franco Bario reviewed episodes of the original series, on which they fluctuated between red and orange lockers, to determine what color the school would have three decades later. Lucky says it was a “gut instinct” to go with red, finding a hue that would complement the maroon in the Bayside logo, which is displayed prominently throughout the halls. In something of a nod to the early-1990s series, he used orange for classroom doors.

He was also able to create many sets completely from scratch. “We’re playing Bayside as, it’s a public school but it’s a really well-funded, nice public school,” Wigfield says of the Pacific Palisades-set location. “When you’re in that old-fashioned hallway, it has stayed the same, but also organically blends from that set to reveal that elsewhere in the school it’s a lot nicer and bigger.”

The hallway in the original series depicted a short set of stairs that only went up, implying that the majority of the action on the show would take place on the first floor of the school. For the Peacock show, however, Lucky wanted to establish a mezzanine level “to give it a grandeur to show they have spent a lot of money on the school.” In order to do this, he designed the main lobby of Bayside featuring a long glass and chrome staircase as a “focal point.”

“It’s a gathering area where you can bring people in from the outside, mingling with those in the school,” he says. “I liked the idea of making it a four seasons high school: keeping it very warm, cozy, big and elegant.”

Lucky’s design process started with the architecture, ensuring the new staircase and the hallways he was creating would be long enough to allow for the many walk-and-talks Wigfield was scripting. “The school has to have a great energy,” he says, “so the design had to have elements of continuous hallways, kind of like ‘The West Wing.'”

Then he worked in a mixture of textures and design elements inspired by Dutch painter Piet Mondrian for additional flare.

The one set piece that couldn’t be vibrant was the principal’s office because the joke is that his character “is a guy whose life sucks and he can’t even get an updated chair from the school board, so his office literally hasn’t changed in 30 years,” says Wigfield. That proved to be one of the bigger challenges for Lucky, since none of the original set pieces, from the desk to the filing cabinets, were still in storage anywhere.

Lucky and Wigfield previously worked together on her NBC sitcom “Great News,” which she says created a shorthand and an easy, trust-filled collaboration for the new series. For the most part, she admits she was vague in her scripts when she would write “interior” and then the location, allowing Lucky to run with his own ideas. “He made really thoughtful choices,” she says.

When it came to the Max, Wigfield “wanted it to be like a time capsule,” down to the pay phone on the wall next to the door. But because the new “Saved by the Bell” is a single-camera comedy, there was the opportunity to finally see what was on the other side of the imaginary fourth wall that the original multi-camera format never showed. Creating that piece, a service counter, was part of what made the Max set the most enjoyable one for Lucky.

The Memphis Design of the Max was “so iconic,” Lucky says. “People love it and know it — but they only know half of this set. So, for them to walk in and go, ‘Yes, this is what it should look like,’ that’s pretty exciting.”