‘Saved by the Bell’: Josie Totah on Playing the New ‘It’ Girl of Bayside and Exploring Gender Identity On-Screen 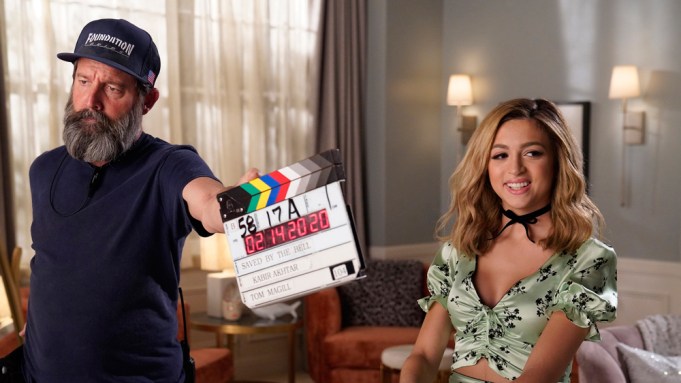 Josie Totah started her career as a child star on such series as “Jessie,” “Back in the Game,” “Glee” and “Champions,” as well as in films including “Other People.” Now the transgender actor has a starring role on a new version of a childhood favorite, “Saved by the Bell.” In the Peacock comedy, premiering Nov. 25, Totah plays a popular cheerleader named Lexi, and she also serves as a producer on the series.

What made you want to take on a behind-the-scenes position, in addition to acting, on “Saved by the Bell”?

When I was approached to do the show, I was obviously so shocked and pleased that someone would even come to me and offer me a job like this because that had never happened. So first and foremost, it was like, “Is this real? I’m so excited. Yes, yes, yes!” And then the more we got to talking about the character and her storyline, specifically her gender identity, it became clear to me that if I was going to do the show, I needed to have more stake in it. If we were going to explore her gender identity, there had to be going representation behind the camera or in our writers’ room or on our producing team. And I was so grateful that Universal and [showrunner] Tracey Wigfield really championed me and allowed me to be a producer on this project because I didn’t feel comfortable doing a show that explored my character’s gender identity if representation didn’t exist. I didn’t feel it was right, I didn’t feel like the story would be told authentically, and I would have had to have stakes in my character’s story in order to do it. I had said no initially because I didn’t think that was a possibility — and also because I was thinking about staying in school because I had already been out of school for so long — and it was hard for me to do because it was such an amazing opportunity. But then once Tracey came to me with the producer credit and with this obviously incredibly opportunity, I was like, “Sorry school, I must go to the stage!” So that was my journey to that.

How do you feel the producer role further challenges you or teaches you about yourself and your capabilities within this industry?

I think so often on a show when you’re working with people who are younger or maybe less experienced, they feel like they can’t speak up or use their voice on something. So it was really important to me to be a voice for the [other young actors] on our show, specifically Alycia Pascual-Peña. The first thing that I did in that role was making sure our hair department reflected our cast and that we had representation in that sense because Alycia, she’s a Black woman and had never had a Black artist do her hair. So on aspects like that it was super, super humbling and just a privilege to be a part of. It taught me that and it was super fun to have a voice at the table.

Did it matter to you if the character you played was trans?

I just wanted to play — and I feel like this is most people’s M.O. — the most evolved, well-written character. I only want to play characters that are worth being told and their stories aren’t just thrown on. They’re not just trans for a reason or not trans for a reason. It was important that whatever role I was taking on, it was fully thought-through and the arc was something I found interesting.

The main characters on the original “Saved by the Bell” fit into the archetypes of the jock, the nerd, the popular girl, etc. If you had to compare Lexi to one of the original characters, who would you say she is the most like?

I would say she’s the most like Kelly Kapowski in that she’s the “it” girl at the school. But I would say she’s a much more evolved version, a much more upper-echelon, smarter, wilder person — in the best way. What I think is so awesome about the show is the dynamic characters and the fact that the writing is just so, so smart this time around. And you’ll find that within the storylines of our characters and their different dimensions, which is super cool because in the beginning I think we’re jumping into those archetypes and then as the season goes on you’ll see the characters’ arcs reflect their growth and their change.

Do you feel like there’s more or less pressure on you, considering your character is brand new and not related to one of the original characters?

Not really, I’m just showing up and doing my job and having a fun time.

How much of that fun includes musical moments, given your background, as well as the show’s history with its main characters formulating a band?

This is not going to be another “Glee” moment! There are music elements in it, but not in a way that’s like the whole world has gone musical. It’s more like, “Now we’re going to the school musical.”

How important is it to you to incorporate music in your career as you move forward?

It’s actually so funny that you ask that because I never intended in pursuing any music thing, but every project I do somehow assumes I’m a singer and that I love music so I have literally sang in every project I’ve done for the past decade, for reasons unbeknownst to me. So I still don’t have plans of doing it, but knowing my track record, I’ll probably be in a musical film tomorrow.

What is it about the half-hour comedy genre that keeps drawing you in?

I feel like for so long because there was such a limited selection of content — just a feature or broadcast television — representation wasn’t getting its way on screen. But now that we have so many outlets like Peacock, like these streaming services, it’s so exciting that we get to tell these stories. And I just love how we can tell it in a half-hour, single-cam way. Obviously “Moonlight” is an incredible movie, but we can tell something like that over the course of a season — not that our show is anything like “Moonlight,” in fact I don’t know why I brought that one up. But I guess what I’m saying is, you are going to learn so much from a season of our show without even knowing it. Basically you’re learning in a tangible way, but it’s not being shoved down your throat, and it’s in time, that’s what I’m trying to say.

How does being just slightly older than the character you portray, especially as a producer on “Saved by the Bell,” inform how much you could look back on your own teenage experiences and say, “That should be reflected in this show”?

Just getting to have a voice was super cool because our showrunner Tracey was constantly turning to not only me as a producer but also the entire cast to do a temperature check with us, to see if it felt right or if whatever we were saying or doing in the episode reflected not only our age group but also our identities, whether that was our race or our gender. We always got to have input. At one point me and my cast mate Dexter [Darden] sat down with our showrunner and Matthew Cherry, who’s an incredible director and an amazing man, and we rewrote a scene sitting in the Max, right after rehearsal but before we were about to shoot it. And I think that’s a testament to how much Tracey cares about our show and wants it to reflect reality, and that was super cool.

What needed to be reflected differently: Was it topical pop culture references or more of an experience a person in that character’s skin would go through?

We had so many conversations on our show about race, gender, equity and classism. And we have them in ways that are tangible and funny to watch — and not an after-school special that are teaching you, if that makes sense.

It definitely does. There were quite a few original series’ episodes that felt like after-school specials.

For sure. What I love about our show is that the through-line or runner that you’ll see throughout the season is us making fun of the original show and everything that was wrong [with it]. I think that’s so important and paramount to bringing back the show because we’re self-aware: We’re admitting that we weren’t always right, but now we’re going to do it right.

Age: 19
Hometown: Sacramento, Calif.
Favorite original “Saved by the Bell” character: Lisa Turtle
Last show she binge-watched: “I May Destroy You”
Most used app on her phone: email
Childhood hero: “My parents continuously saved my ass time after time again so they are constantly my heroes.”
Historical figure she’d like to meet: social activist Marsha P. Johnson