Tessa Thompson and Ramy Youssef on ‘Westworld,’ ‘Ramy’ and Why Representation Matters 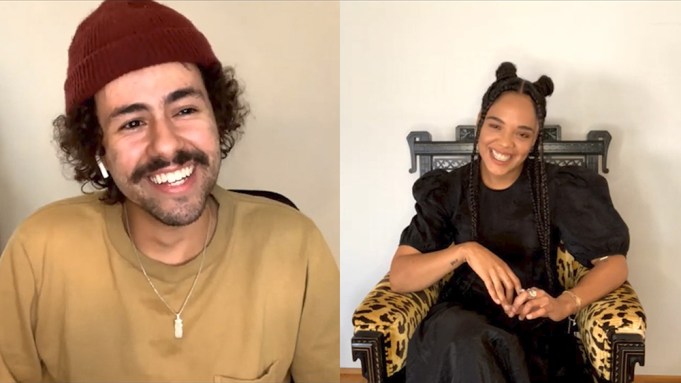 Ramy Youssef’s Golden Globe win this year, for his comic role on his series “Ramy,” came as a delightful surprise. And on “Westworld,” Tessa Thompson is casting into the future, imagining a woman of color who’s eventually inhabited by an android — and keeping her work human scale throughout. They talked to each other over video chat for Variety‘s Actors on Actors issue.

Ramy Youssef: You have a way cooler chair than I do. I wish I had a chair on that level — just amazing. I’m so excited to talk to you. What was it like to jump into this thing?

Tessa Thompson: I joined “Westworld” at the end of Season 1. I sent in an audition tape for the pilot. I was trying to figure out how to play a robot, and then I didn’t get a call back. I never heard anything about it. Much later, there was this chance to play a human on the show. My first scenes were with Jeffrey Wright and with Anthony Hopkins. It felt surreal to occupy this space where I had the power over them. That was bizarre.

Youssef: I’m assuming you don’t know where it’s going. As an actor, sometimes you just pick up on things that are in the script that even the writers don’t know. I will write stuff for people on my show. Then they’ll tell me stuff, and I’m like, “Oh, man, I didn’t see it that way.”

Thompson: I had broad ideas: “What does power look like in the future, in a young woman of color?” But the only thing I knew is that I would potentially have sex with a robot. We talked about this woman sampling the merchandise in the park — that would be her expression of power. I continue not to know where the show’s going to take me. I’m curious for you, because you’re pulling from your life. Were there pockets of your life that you are surprised that you actually excavated?

Youssef: The feeling that I was chasing was wanting to be as nervous as I could. What I actually ended up doing — you can’t know until you meet the people. That’s why I love good actors, because they tell good writers what’s going on.

I have seeds from people in my family or my community, but then how do we take them to places that people usually hide? It gets tricky, because my show is the only show in the English language that’s attempting to show Muslims or that is speaking Arabic. There’s an instinct to not want to take risks, but you have to.

What level of responsibility do you feel, when you know people are looking at you as representing Black women?

Thompson: There is a real feeling of responsibility when you’re the only one. There’s this burden of being exceptional. While I think you are exceptional and I hope I’m exceptional, too, I don’t think we should be the only ones. The work that we do should be inside a diversity of ideas around our identity, because Muslims are not a monolith, and neither are Black people. I try not to feel responsibility to be an ambassador, because I can only speak to my own experience. I as a light-skinned Black woman have a different experience than some of my counterparts.

Watching your show — I wasn’t ever seeing a Muslim family presented that way. When we’re able to speak from a place of honesty, we set people free, because there’s bound to be somebody that feels seen and understood in a way that they hadn’t before. I feel heartened that inside Hollywood there’s this idea around diversity, but I get annoyed with the way that the term is thrown around, because, for me, the thing that’s exciting is diversity of ideas.

Thompson: You look at the way that Black and Brown people are portrayed in the media, and there’s a sameness — we’re obsessed with watching Black pain and Black and Brown criminality. I want for us to be able to exist in ways that we’ve never existed before. I’m not sure that I’ve seen —

Youssef: You’re not sure that you’ve seen what?

But a lot of the stuff you’re hitting on, I wonder how much it factors into the roles that you’re choosing. Now you’re in this place where you have the nuance of choice.

Thompson: There would be auditions [for characters] that were so one-dimensional and in some cases offensive. I wanted to work, but I could never do those parts very well. Breakdowns would say, “25, sexy.” I had to ask my agent to black out the descriptions because I would feel so intimidated when I knew that a character was supposed to be perceived as sexy. Reading those words made me feel so small. I was tired of the opportunities that I was presented. I told myself, “I’ll move from Los Angeles. I’ll move to New York. Maybe I’ll do a play. Or maybe I’ll hang out on a park bench.”

And then I found this script, “Dear White People” — it was an interrogation of Hollywood. The film told us that culture isn’t just represented in media — culture is created in media. You create a culture where you expect Black people to look, act, think and behave a certain way; you perpetuate ideas around them that are harmful. That’s something that we’re talking about in a robust way now. That film changed my trajectory. It made it OK for me to no longer stomach some of those portrayals, to figure out that I wanted to pave a new course.

Youssef: We grew up watching ourselves in marginalized roles. And then we get to a place where we get to be acting and writing and address those things head on.

We have to do all this unwiring, to undo our own frames of reference about ourselves. And sometimes I’ll watch “Tim and Eric” and I’m like, “Why do I have to talk about being Muslim?”

Thompson: Sometimes it’s hard not to think about it in terms of race or gender identity, which is annoying. But I look at all the films and all the television shows growing up that I loved so much; we were invisible inside of those narratives. I want to go back and rewrite those things. There’s so many spaces that I’d love to occupy, but I feel like that still is a conversation that makes it about gender or race. If we don’t have to think about that, what do we want to think about?

Youssef: I want ownership over these narratives; I don’t want them to be told by somebody who doesn’t have the values that are being portrayed. Writing a story about a Muslim family or a Black woman coming into her own — that’s a good business idea at this point. That’s something that any writer in Sherman Oaks would be like …

Youssef: A barometer for me is “Could that dude in Studio City think of this storyline?” I have to make sure he wouldn’t think of this. That’s how specific it’s got to be. I want this to be something only I could know.

Thompson: You don’t want some guy named Dan to be writing it outside of Chipotle on Ventura?

Youssef: If Dan could have written this over a burrito bowl, it’s got to go. No offense to Dans. Growing up, I had the news, a couple of terrorist shows and Aladdin. And now I get to put out this thing, but I’m excited about another generation of people just getting the ability to be weird.

Thompson: What’s it like winning awards? I’ve never done any of that.

Youssef: It’s so dumb. It’s the craziest thing, because I would be walking down the street and someone would be like, “That’s the dude that won an Oscar!” It genuinely doesn’t matter. You could win a Kids’ Choice Award, and it’s got the same weight.

Youssef: No, people don’t know what awards shows are. Only Hollywood knows.

Thompson: Do you feel like sometimes you’re aiming to offend people?

Youssef: There are certain things that only comedy can talk about. There’s going to be debris to clear the way for other conversations, but also to clear a way for genuine activism. Our work is about freeing the mind of people to be able to connect to the real work. There are people who’ve dedicated their entire lives to real change. Our work is palate cleanser. Any blowback is nothing compared to people we both know who are putting themselves in legitimately dangerous situations to make things happen.

Thompson: I’m of the mind that political change is always preceded by cultural change. We have the ability to set the stage. When you talk about systemic racism and problems inside policing, one of the impediments has been cop shows that offer a narrative that the police always offer safety and comfort. We know, of course, that’s not always the case for Black and Brown people. Changing the narrative inside the stories that we tell — there is value in it. Gosh, I hope.

Youssef: A lot of networks haven’t thought about how unequal it is for people of color in the industry until people started complaining about that. Hollywood needs as much protesting as the government does.

Thompson: Also, at this time of quarantine, I probably shouldn’t say this, but I’m like, “I don’t know if I’ll ever work again.”

Youssef: I mean, you’ve got that chair. You’re good.

Thompson: I begged for this chair. It was a set-piece on a film I did recently that they hardly paid me for. So they gave me this chair. I don’t think I can stop working, because my furniture is from a job.