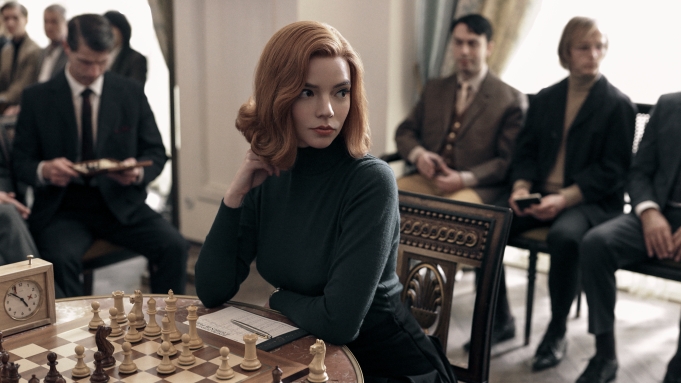 Neither VFX supervisor John Mangia nor VFX producer Arissa Blasingame were chess masters before joining Netflix’s limited series “The Queen’s Gambit,” but they learned about the game once they were recruited to come on board to create the visual effects.

Based on the novel of the same name by Walter Tevis, the series follows the rise of young chess prodigy Beth Harmon (played by Anya Taylor-Joy), an orphan with a pill addiction. So intrigued by the game is Beth after seeing the janitor (Mr. Shaibel, played by Bill Camp) play, she goes to bed and sees a chessboard form on the ceiling.

“Every time you see the chess on the ceiling or anything happening when she’s moving them mentally with her mind, all of that stuff is based on real moves,” explains Blasingame, whose company Chicken Bone FX designed the sequences. “We definitely learned [about the game] throughout.”

Mangia adds the team came on board early in the pre-production process to collaborate with writer and director Scott Frank and production designer Uli Hanisch to decide where the visual effects would take over. “We discussed everything such as how the pieces looked and how they would move in the series,” he says. “Those pieces are an extension of who Beth is.”

Mangia and Blasingame provided over 700 shots for the series, including the virtual locations and building a 1960s Las Vegas. But for the ceiling sequence, Blasingame explains they used LIDAR scanning, a process that captured precise 3D measurements of the rooms and environments that were then used to create the ceiling. “That was entirely computer-generated. Using LIDAR we could stay true to DP Steven Meizler’s camera movements and recreate it in the effects stage.”

“The actual look of the pieces iterated over time,” says Mangia, who credits CG supervisor Brendan Fitzgerald for accurately creating the chess pieces and boards in VFX. “It was a lot of simulations and questions such as ‘How do we go from a tree branch to a chess piece?'”

The dormitory had its own chess pieces that Mangia and the team would use throughout the episodes. “They come from the shadows and so we had to look at the lighting,” says Blasingame. “But we had to adapt each piece according to the lighting of the space that she was in, whether it was her room or in a tournament.”

But, Mangia points out, even though the pieces change depending on the environment, the shapes never changed and were tied in design to the first episode. This is because “these pieces are an object of comfort for Beth,” says Blasingame. “She learned in the basement and that’s where she would go back to if she had a conflicting moment. By the end, Beth has evolved so much as a player, but her heart is in that basement with Mr. Shaibel.”

“The Queen’s Gambit” is streaming now on Netflix.