How ‘Penny Dreadful: City of Angels’ Choreographer Created Intimacy on the Dance Floor 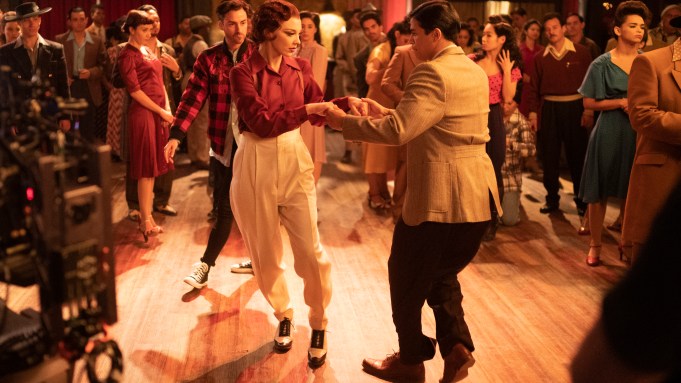 If you’ve been following this season’s “Penny Dreadful: City of Angels,” you might have been seduced by the sexy dancing at the Crimson Cat dance hall in the series. The season takes place during a hot summer in Los Angeles in 1938. Zoot suits, Mexican folklore and radio Evangelism are on the rise as construction on the Arroyo Seco Parkway and freeway system begins.

The Crimson Cat is where the Latino community descends, a place where energy can be released on the dance floor. Tommy Tonge, whose credits include “The Billie Barry Jubilee Ball” and “An Evening For Earl” gala concerts  and the second and third seasons of the original “Penny Dreadful” returned as this season’s choreographer and is the man behind the electrifying numbers.

Here, Tonge talks with Variety about learning the Latin dance movements of the 1930s, his choreography process and putting together a key dance scene between Tiago (Daniel Zovatto) and Molly (Kerry Bishé).

With this season set in the 1930s, what research did you have to do to replicate the dance moves of the time?

That was one of the really exciting things about this project. It was such an interesting time in Los Angeles and the world in general. In terms of the movement and the music that was happening, there was such a mix of many interesting new sounds and new movements. A lot of the people who came to the Crimson Cat came from the Latino community, so first and foremost, it was about figuring out what the movement would be. I spent time the different Latin styles; I worked with Latin [instructors] and studied rhumba, samba and tango. I also looked at big band swing style music and mingled it by creating this hybrid.

How different is your process when choreographing for TV?

I didn’t want any of the dance numbers to look choreographed at all — I wanted it to look improvised — and so once I had figured out the styles, I worked with the producers and we discovered early on that we wanted it to feel really exciting, thrilling and sexy, and ferocious in a way. Those were the words we were looking at. We had music specifically arranged for the Crimson Cat. I went in and figured out the different layers of movement. I had two great assistants and a skeleton crew of 10 dancers. We workshopped all the styles and rhythms. We established all the different tracks and different pieces of choreography before bringing in all of the dancers to break down their tracks and the movements they needed to do. I workshopped with the actors and worked with them from the ground up because they weren’t trained dancers.

How many dancers did you have in scenes at the Crimson Cat?

Typically, I would have 100-150 dancers for scenes there. In Episodes 9 and 10 we had around 100 dancers. It was amazing because the space was huge. You could walk into the actual space. At the beginning of the series, I had more time and more prep, but as the season evolved and we got to [Episode] 10, I had less time. I had to get the dancers in for a few days to teach them some new choreography just to keep it all fresh. I worked with the actors whenever they had a gap in their schedule. I would say it took between eight to nine days to shoot.

Early in the finale, there’s a slow dance number between Tiago and Molly and the camera dances with them. What conversations did you have with the director Richard J. Lewis about how to capture that?

We went for a stripped-back idea. There’s such high energy in that space, and this was just a beautiful scene between two people who really love one another. It’s soft and tender. We shift gear from the usual energy of the Crimson Cat and wanted to highlight the tenderness and love that these two characters had for one another. Early on, I had more movement to that and more choreography. By the end, the goal for me was to not over-choreograph it. I kept it simplified and let the emotions between Molly and Tiago speak for itself.